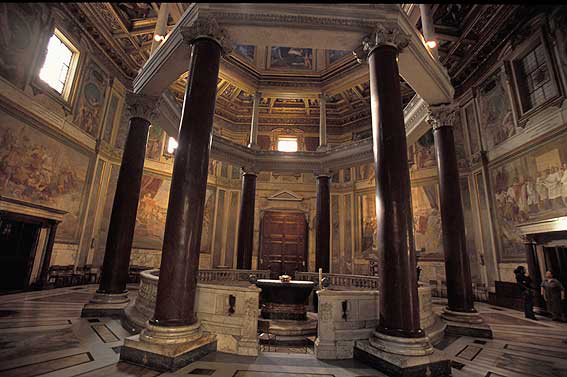 The Lateran Baptistery which stands adjacent to St John Lateran’s Basilica in Rome and is also known as ‘San Giovanni in Fonte’ was the first Baptistery to be constructed after freedom of worship was granted to Christians by the Emperor Constantine with promulgation of the Edict of Milan in 313. The Baptistery stands on the site of an ancient Roman spa that was dated to the second century and served the Roman villas that were built in this area of ancient Rome.

From the first century baptisms were celebrated in Rome close to waterfalls or flowing water. Tertullian, who was a lawyer and a Christian convert from the second century, informs us that St Peter Baptised in the Tevere! (Cfr De baptismo 2,3)

For approximately 300 years there were 10 periods of persecutions against the Christians within the Roman Empire. We can only try to imagine the exuberance of these early Christians when they could finally profess their faith in the Lord Jesus and baptise their children without fear of persecution.

The original Baptistery that was constructed by the Emperor Constantine was a circular building that was inaugurated sometime between 320 and 325AD. Later, Pope Sixtus III (432-440) changed the shape of the Baptistery to its present octagonal layout that we still see today. Typical Roman architecture used a circular shape to represent perfection and for this reason the ancient mausoleums are circular. One of the best examples of this is the mausoleum of the Emperor Hadrian which is better known as the Castel Sant’Angelo in Rome or another example is the mausoleum of Constantia on the via Normentana, Rome.

The octagonal shape represents the day of the Resurrection because the Risen Lord appeared to the Apostles on the eighth day, what St John called “the first day of the week” (Jn 20:19). With the symbolism of the octagonal shape the Church wants to highlight the fact that in baptism we enter into a new temple, the temple inaugurated by Christ’s Resurrection. The eighth day is also the day of the new creation where man can once again enter into Eternal life.

In this place the catechumens pronounced the triple formula of renunciation of temptations, sin and the devil. They then followed with the tree affirmations to which they replied “Credo” in Latin or “I do”. The catechumens say “yes” to God the Father the Creator, to Jesus Christ His only Son and to the Holy Spirit and the Church.

The catechumens face towards the west to renounce satan as this is where the sun sets and is a symbol of the darkness of sin. They then turn towards the east to profess their faith in God which directs them to the sunrise and symbolises that they receive the light of Christ and become the sons of God.

The baptism ceremony itself was celebrated by immersion. The catechumens, dressed in white, are immersed water following the invocation of the Holy Spirit. The neophytes then leave the baptistery and enter the Basilica to take part in the celebration of the Eucharist. Typically, the Baptismal rite was celebrated as part of the Easter Vigil celebration. 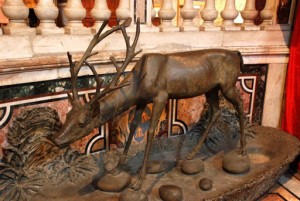 The Emperor Constantine had decorated the baptistery with seven silver fountains decorated with deer that were drinking from the flowing water. The baptismal font that stands in the centre of the baptistery is not the original but was manufactured in the Roman era. The seven deer were robbed by barbarians and so Pope Paul VI in 1967, adorned the baptistery with two bronze deer statues drinking from a river as an explicit reference to Psalm 42 verse 2: “like the deer that yearns for running streams, so my soul is yearning for you, my God.”

The baptismal font is below 8 marble red porfido columns that were donated by the Emperor Constantine. They are joined together by a white marble architrave. The 8 columns, just like the shape of the baptistery building are laid out in an octagonal shape to remind us of the significance of the 8 days or the new creation in Christ. Pope Sixtus III had his catechesis on the sacrament of baptism inscribed into the architrave as follows:

Here is born a people of noble race, destined for Heaven,
whom the Spirit brings forth in the waters he has made fruitful.
Mother Church conceives her offspring by the breath of God,
and bears them virginally in this water.
Hope for the Kingdom of Heaven, you who are reborn in this font.
Eternal life does not await those who are only born once.
This is the spring of life that waters the whole world,
Taking its origin from the Wounds of Christ.
Sinner, to be purified, go down into the holy water.
It receives the unregenerate and brings him forth a new man.
If you wish to be made innocent, be cleansed in this pool,
whether you are weighed down by original sin or your own.
There is no barrier between those who are reborn and made one
by the one font, the one Spirit, and the one faith.
Let neither the number nor the kind of their sins terrify anyone;
Once reborn in this water, they will be holy.