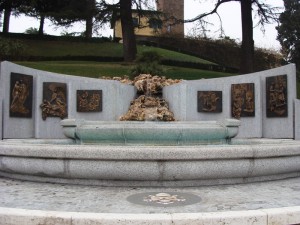 St Joseph’s fountain, realised in 2010 by architects Giuseppe Facchini and Barbara Bellano in collaboration with artist Franco Murer, brings the number of fountains in the Vatican city to 100. The fountain was commissioned because the Vatican Gardens, so rich in artistic patrimony from every epoch, was not blessed with a monument in honour of St Joseph, Patron of the Universal Church, within its confines. Furthermore, it was considered a fitting tribute to Pope Benedict XVI whose baptismal name is Joseph and so the fountain also carries his stem and dedication.

The fountain is a harmonious work realised in marble and granite. The water flows from the barren rock located in the centre of the fountain into elliptical tanks, the smaller tank being superimposed over the larger, which collects the water and creates a running waterfall effect. The fountain is surrounded by the ample greenery of the Vatican Gardens which maintains the aura of nature and serenity in the area making it a place for prayer and reflection for Popes of many generations to come.

The iconography of the fountain is simple and profound. The flowing water of the fountain represents the living water that Christ brings that “wells up to eternal life” (Jn 4:14). The walls of the fountain, that appear to the onlooker like the ancient scrolls of prophecy, remind us that God’s plan, revealed by the prophets of old that the Messiah would be born of the house of David, was accomplished by Joseph’s correspondence to God’s Will.

The six scenes depicting the life of St Joseph follow the Gospel narratives provided in the Gospels of St Matthew and St Luke: the betrothal of Joseph and Mary, Joseph’s dream, the birth of Jesus, the flight to Egypt, the finding of Christ in the temple and, finally, Joseph’s workshop in Nazareth.

Looking particularly at the scenes of St Joseph’s life reveals some of the fountain’s inner charm. The artistic impression of St Joseph is a fitting tribute as he is depicted as a vigorous young man, the head of the Holy Family, who works to care and provide for his wife and Son whilst contemplating and corresponding with God’s Will. 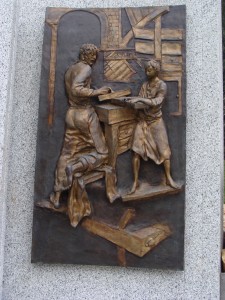 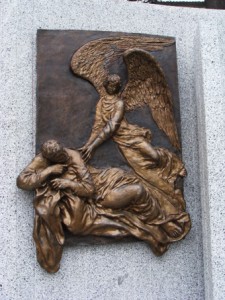 The panel depicting Joseph’s dream shows the moment recounted in St Mathew’s Gospel when the Angel appears to Joseph in a dream to reveal the mystery of Mary’s motherhood and his own part in God’s plan. Joseph is shown in the foreground of the scene in a restless sleep and the Angel appears above touching his shoulder in a gesture of reassurance. This is Joseph’s annunciation! However, Joseph doesn’t respond with words but with his actions and the remaining panels portray how Joseph embraced his vocation to be the spouse of Mary and the guardian to the Son of God.

The final panel is an intimate scene set in Joseph’s workshop in Nazareth. Here the artist depicts the magnitude of Joseph’s vocation: Jesus is depicted as the “carpenter’s son” (Mt 13:55), he is helping Joseph in his every day work. This moving scene shows them working together like father and Son. Indeed, it was by doing these tasks, hidden from the world yet under Joseph’s guardianship, that “Jesus advanced in wisdom and age and favour before God and man.” (Lk 2:52)

Nestled in the Vatican Hill between St Peter’s Basilica and the Governatorato, St Joseph’s fountain reminds all that St Joseph, Patron of the Church, a man of silent prayerful action, looks over the Church as she prayerfully contemplates the Lord and as she works for the good of the world. The fountain is what Pope Benedict XVI called a “symbolic reference to the values of simplicity and humility in doing God’s Will daily”.