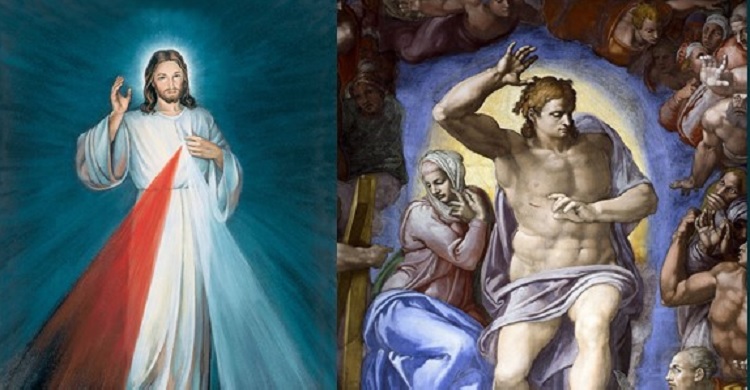 The extraordinary Jubilee of Mercy ends on the 20th November 2016 which also coincides with the solemnity of Christ the King. At the end of the Liturgical Year the Church contemplates the final coming of the Lord and so the Last Judgment by Michelangelo, from the Sistine Chapel, is a fitting masterpiece with which to celebrate the conclusion of this Year of Mercy.

The Last Judgement shows the moment when Christ comes again as we say in the creed to, “judge the living and the dead”. A heroic Christ is surrounded by angels and saints in the moment just before the Last Judgement of mankind. The artist Vasari reflects the views of many when he called this scene quite literally terrible which referred to both the power of the images created by Michelangelo and the sense of Christ the all-powerful Judge.

It is necessary to look much more keenly at the way Michelangelo depicted Christ to realise that he was not revealing a scene of impending terror but, instead, an image of Christian hope. When we look at Christ’s face we can see that it is an Apollean face like that of the Good Shepherd. Looking at His body, we do not see a perfect body as on a statue but a body that is disfigured by pain. Michelangelo modelled Christ’s body on the Belvedere Torso which is believed to represent Ajax from Greek mythology, who killed himself after performing an abominable act. In this depiction, Christ’s body that has taken on the sins of mankind to redeem man from them. Christ’s hands, side and feet bear the marks of His passion and death which emphasise that Christ suffered for the redemption of mankind.

The Christ we see in the Last Judgement is none other than the merciful Christ, the Good Shepherd. He laid down His life for His sheep and He now comes to meet in the great conclusion of God’s merciful plan.

To reinforce the fact that Christ comes in mercy we must pay attention to the way Christ’s side has been depicted. Whilst Christ raises His right hand in judgement, his left hand indicates the wound on his side. This is the wound from which, “blood and water flowed”. In other words, from where His mercy was poured out on mankind. By indicating His side, Christ draws our attention to His mercy.

Our Lord said to Sister Faustina, “before I come as a just judge I come as the King of Mercy”. If we place the image of the Divine Mercy next to Christ in the Last Judgement the resemblance is incredible. This iconographical similarity helps us to grow in the knowledge that the Lord’s mercy is with us always and that He invites us not to a fearful conclusion but to a meeting with love.