We have the joy of presenting the interview with Mother Rebecca that was published by the Catholic Newsagency Zenit (www. Zenit.org) regarding our ‘Catechesis with Art’ initiative. 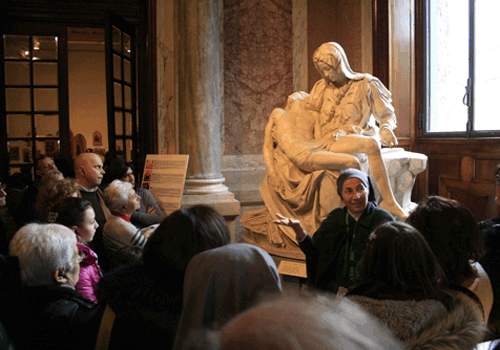 Rome, Thursday, 26th January 2012 (Zenit.org) – Walking through the Roman streets, visiting the artistic and historical places like Cathedrals, abbeys and catacombs, one cannot fail to notice the sisters who are dressed in a green habit walking around. Zenit was intrigued and initiated a little investigation only to discover that they are the Missionaries of Divine Revelation whose vocation is to bring mankind closer to the faith through the ageless beauty and profundity of art. This mission was confirmed by Mother Rebecca, the Superior of the order, who granted an interview with this agency.

Mother Rebecca, firstly I would like our readers to have a brief account of the history of your Order.
Our history started with the apparition of the Virgin of Revelation at Tre Fontane (Three Fountains) Rome on the 12th April 1947. The Virgin appeared to an anti-clerical protestant called Bruno Cornacchiola, who went to that place, along with his three children, to write a speech against the Virgin Mary which he would to deliver the following day at a meeting of the Adventist sect to which he belonged.
Suddenly, the children left Bruno and he eventually found them on their knees before a grotto where he also saw an luminous point that seemed to come ever closer until it actually touched his eyes. It was the Beautiful Lady who was covered with a green mantle with the Bible, the Word of God, in her hand. She said to Bruno, ‘You persecute me, return to the heavenly sheepfold – the Catholic Church – I am the Virgin of Revelation’. Our charisma was born from that extraordinary event.

When was your Order born?
We received the approval of our Order by the Church in 2001, but the project of Mother Prisca, our foundress, was born much sooner. Mother Prisca, had experience of the Catholic Action movement and having lived near Cornacchiola for many years, following his meetings and catechesis; in her heart she felt called to dedicate herself totally to the Lord. At the same time, she also felt the called to found an Order that would spread this story of love and mercy. She selected everything, including the style and colour of our habit that comes from the green mantle of the Virgin during the apparition. However, Mother Prisca never saw her project realised as she died in 1998. 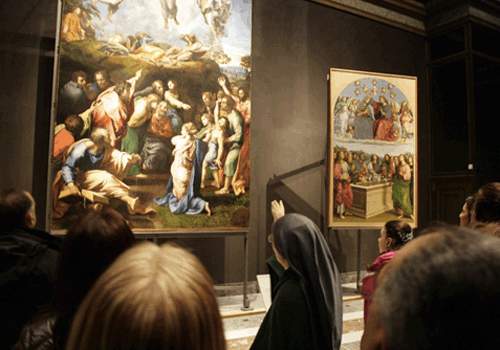 What spiritual heritage has your foundress left you?
Evangelisation founded on the Three White Loves: the Eucharist, the Immaculate Virgin Mary and the Holy
Father which are the cornerstones of the Catholic faith. Naturally, our work also extends to parish catechesis, meetings and helping the various Diocese in which we work. In fact, Cardinal Ruini, from our own Dioscese, invited us to work in St John Lateran’s Basilica and it was from there that our ‘Catechesis with Art’ programme started.

What would you say are the strengths and particular uniqueness of this programme? How was this initiative born?
Entering St John Lateran’s Basilica with its great beauty we realised that, in reality, we knew very little about it. We started to consult tourist and historical guides and began to comprehend the richness of the Basilica’s historic, religious and architectural background.
We thought that we would just prepare some simple catechesis taking up the theme of the ‘Biblia Pauperum’ the Bible of the Poor, for our friends and families retracing the story of Salvation through the reliefs on the lateral walls of the central nave. The catechesis proved so moving that this group of people insisted that we repeat the experience so that they too could invite the people they knew.

What happened then?
We started to repeat the experience in the Lateran Basilica and very slowly decided to create a little tour at a very basic level.
Further encouragement arrived from the Catechetical Office of the Roman Diocese who had heard about these meetings and had asked us if they could spread the information about them. From there, we slowly started to produce a specific programme with some graphics.
In 2007, a friend introduced us to Cardinal Comastri, who had been recently nominated Vicar if St Peter’s Basilica by the Holy Father, and he wanted to embrace the Pontifical desire that St Peter’s Basilica was not to become like a museum, but a living basilica. The Cardinal, having heard of our tour, requested that we write a guide of faith and art for St Peter’s Basilica.

A great achievement and a great honour!
Exactly! We worked all summer and on the 8th September 2007 we presented the guide to the Cardinal who made his refinements and finalised the text. He was pleased with the guide and went on to ask us to do guided tours of the basilica. The final text was translated into 10 languages.
From our work in St Peter’s Basilica we easily progressed to the Vatican Museums. It was something that we desired but never actively pursued that, in the end, became a reality. Think of the feeling every time we enter the Sistine Chapel to do some catechesis!
Rome, Friday 27th January 2012 (Zenit.org) Art is an instrument for the New Evangelisation.This is the idea that animates the Missionaries of Divine Revelation, known as ‘the green sisters, who are present in most of the historic places in Rome with their ‘Catechesis with Art’ programme. This catechetical itinerary traces what the Holy Father called the ‘way of beauty’, aiming to relight the fire of the visitors faith through Rome’s mysterious and harmonious heritage. After telling Zenit of the origin and history of this programme, Mother Rebecca went on to describe its overall content. 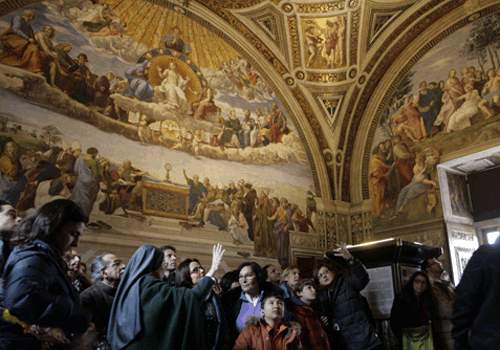 How do you develop your catechesis?
Firstly, we start with an in-depth study of the artistic masterpiece, searching for the story of the masterpieces’ commissioning which helps us to understand both the historic context and the life of the Church in that epoch. In this way the masterpiece speaks, expressing a language of truth and faith. When an artist paints an altarpiece, like Raphael who painted the Transfiguration, he must bear in mind that there is an inseparable connection between what will happen on the altar and the scene in the painting. In fact, in the case in point, there is a division of the Transfiguration on Mount Tabor into two scenes that captivate two different groups of spectators: the celebrating Priest and the faithful. The same is true of the Pieta by Michael Angelo. In Mary’s outstretched arms is an embrace that indicates: ‘My Son has died for you, His death is not in vain’. It is this type of connection that we search for in addition to giving an account of the artistic details that make the work unique.

How long have you worked on this initiative?
This is the eighth calendar year that we have concentrated on the early Christian Basilicas. We have matured our thinking, reflecting on the fact that we are called to rediscover the roots of our Christian faith. In addition, St Peter’s Basilica is not only a Church that is dedicated to Peter, the Apostle, as many believe, but this place really contains his body which is buried in the ancient necropolis.
In line with the Holy Father’s thinking, the more that the world, the European Community and the relativistic mentality that surrounds us insists on removing our very foundations, the more we feel the need to take forward this evangelic mission.

The Church is currently focussing on many projects dedicated to the relationship between art and faith. For example, there is ‘The Door to the Infinite’ which is organised by the Roman Vicariate’s Office of Social Communications. How do you think that the public will respond?
Emotionally as the Lord touches the heart in an extraordinary way! You realise that the Gospel message can pass through this type of catechesis using images. We are happy that we are developing this type of project because we feel like ‘pioneers’ in the way that we have taken this work forward in the last eight years. We always say that this is not our wisdom but the wisdom of the Church as we have not invented anything!

Can art truly be a means of recalling people to the practice of their faith?
Absolutely, art is a ‘privileged instrument’ for evangelisation. It is the highest expression in which man leaves his nature reaching out to the transcendent. What greater means does man have? Through images, art helps us to touch the Invisible with the visible and this provokes an emotion, not only at the epidemical level but on an emotional level that engages the rationality of the truth contained in the Sacred Scriptures and the tradition of the Church. We can and must, through art, ‘give the reason for our faith’ as St Peter exhorts us in his letter and this is our primary objective. 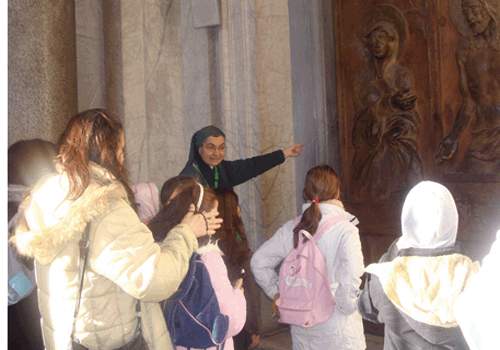 Who is your itinerary aimed at?
Everyone! However, we are particularly seeking to spread this type of message in the schools. In fact, every year there are school outings that take the children to mosques, to synagogues whilst a visit to St Peter’s Basilica is not even considered. We greatly encourage the schools to bring the children to the Basilica or the Vatican Museums and Cardinal Comastri has endorsed this initiative with a letter because we are convinced that for Europe to rediscover the faith that we must start with the children. Children are always fascinated by beauty and truth but what images are before them in today’s society? Today we have a society of images, bad images.

How does your work contribute to this rediscovery?
We use the thoughts and the vision of the sacred, artistic images to remind those who view them of the profundity and clarity of the faith as based on the Sacred Scriptures and the thoughts of the Church.
The same clients and artists have sometimes had troubled lives, however, before a Biblical image they place themselves in a respectful, deferential relationship because they know that they have entered into a mystery, something that is greater than themselves.

Unfortunately we are now losing the sense of the art…
It is true that the subjects are different today; therefore we try to promote this itinerary extending it beyond Rome, not to go backwards, but to recapture that ‘what we were and what we did’ to improve ourselves. We hope that by people passing the word, our message will spread around the world.