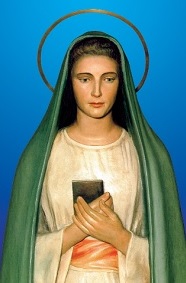 What should we do in the face of escalating violence and terrorist threats that are casting their shadow over the whole world? The Virgin of Revelation said, “Never stop saying the Holy Rosary”! Therefore, this is a call to “fight the good fight of the faith” (St Paul’s letter to Timothy). It is an invite to participate in the spiritual army to battle for peace in the world. It is a call to participate in a Rosary Crusade!

The idea is simple. Each day / week / month (depending on your time) pray the Holy Rosary for the intention to defeat of terrorism.

To enlist in the Rosary Crusade simply complete the form at the bottom of this page and we will send you updates and spiritual encouragement during this year.

We want you to help us to envelope the whole world with prayer because it has the power to change the course of human history and establish peace in our world. The Crusade aims to find volunteers to “enlist” from all parts of the world to pray for the defeat of violence and terrorism in their countries. We pray that in every part of the world someone is praying the Holy Rosary for peace. At all times of the day Mary’s battle cry will arise from the world to invoke her intercession to bring about peace.

The Rosary Makes a Real Difference

History testifies to the fact that nothing like Mary’s intercession has the power to stop or change the course of human history. The Rosary has many times in the past triumphantly brought about the defeat of the enemy. This happened when the Ottoman Empire wanted to enter Europe from the city of Vienna (1683) and were defeated by the Christian coalition and also during the naval battle of Lepanto (1571). Today, more than ever, we must look to the lessons of the past. The battle against the Christian faith is getting increasingly bitter. Our Christian brothers continue to die all over the world for the Gospel and the army of terror is advancing once more to eradicate Europe’s Christian roots.

2017 is a special year when we will celebrate two important anniversaries: the 100th anniversary of the apparition at Fatima and the 70th anniversary of the apparition of the Virgin of Revelation at Tre Fontane, Rome. Therefore, it is important to respond to Our Lady’s call for prayer and conversion during both these apparitions. The Virgin told Bruno Cornacchiola that many things can be stopped through prayer. Sr Lucia dos Santos the seer at Fatima said, “The Most Holy Virgin in these last times in which we live has given a new efficacy to the recitation of the Rosary to such an extent that there is no problem, no matter how difficult it is, whether temporal or above all spiritual, in the personal life of each one of us, of our families…that cannot be solved by the Rosary.” What a fitting celebration of these great feasts to join the Rosary Crusade for peace!

And The Virgin Protect Us