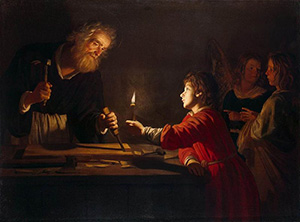 In the month of March, we would like to turn our attention to one of the greatest figures in the story of the Church: St Joseph. The liturgy immediately helps us to comprehend the calibre of this great Saint because lent is interrupted in order to celebrate the feast dedicated to Jesus’ foster father.

Just like the Virgin Mary, St Joseph had the mysterious privilege of taking care of the Son of God during His youth. That Divine Child, born on the Virgin Mary, was entrusted to His care. Mary and Joseph were the first witnesses of the Incarnation. They were the first to receive the good news of the Emanuel, God with us, and they accepted that Divine mystery through which God willed that they rear His Son.

Mary and Joseph were conscious of how much God had honoured them by entrusting His Son to them and so they cherished Jesus, in the knowledge that He belonged to God. Thus, the Carpenter of Nazareth accepted Jesus and, like any father of his time, taught his Son his trade. Jesus learned to be a carpenter from Joseph and He practiced this trade for many years during His earthly life. Therefore, there is much that we can learn by pondering Jesus working together with Joseph in the carpenter’s workshop.

As always, art can help us contemplate the Lord’s life and so let us reflect upon the beautiful scene of Jesus in St Joseph’s Workshop (1617-18) by Gerard Van Hontharst (Gerard of the night).

The real name of this Dutch artist is Gerrit Van Honthorst. At the start of his career, he visited Rome and was greatly influenced by the work of Caravaggio who inspired his painting technique. His nickname, “of the night” came from his skill with painting night scenes or religious representations using candle light. Caravaggio’s influence is evident in his work although his own style is also distinctive because of the way he creates scenes using candle light that create marvellous light and shadow effects in his paintings.

The scene was realized in very realistic way that captures Joseph and Jesus in the workshop in the midst of their work. It is already evening, and this allowed the painter to create shadow and light effects that emanate from the only candle present in the work.

The light comes from the centre of the scene. Jesus, holds the candle to provide enough light for Joseph to work whilst at the same time, Jesus’ own face is illuminated. This gesture is both very touching and symbolic as it reminds us of what He will say to His disciples many years later; “I am the light of the world”. It is very beautiful to notice that Jesus does not look at the work Joseph is doing, but rather, He is looking at Joseph’s face as if to contemplate the beauty of the soul of this man that had protected, cared and looked after Him whilst He matured. One can almost detect the look of gratitude towards Joseph in the eyes of Jesus. The pair do not say a word to each other and yet the composition of the picture demonstrates the attention with which Joseph works and the devotion the Lord has for him.

God conceded the grace for St Joseph to work with the boy Jesus for many years. We too may obtain this same grace every time that we follow God’s will in our lives and therefore we can imagine ourselves working alongside Jesus, as in the painting, while He looks towards us with a loving glance. Nothing that we do, not even the menial tasks if they are done with love, can exclude us from the contemplation of God. Therefore, just like St Joseph, let us offer our daily work to the Lord and He will give us that same light which leads us to fulfil the Father’s will.