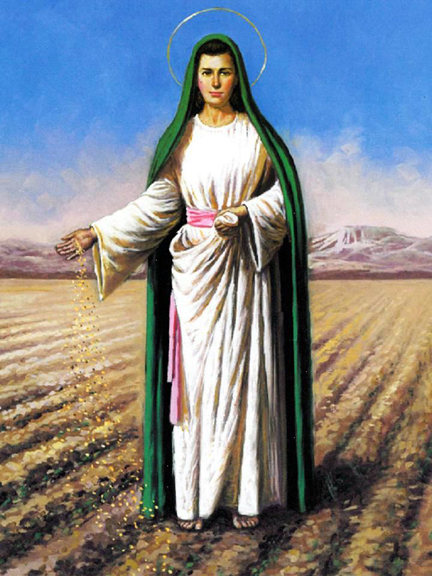 The Holy Scriptures provides us with a splendid definition of faith in the Letter to the Hebrews (Heb 11:1): “Faith is the realization of what is hoped for and evidence of things not seen.” Our father in the faith is considered to be Abraham who always based his actions on god’s promises because he was certain that God would not delude him. “By faith Abraham obeyed when he was called to go out to a place that he was to receive as an inheritance; he went out, not knowing where he was to go.” (Heb 11:8) Abraham undertook an adventure that had no rational foundation, “for he thought that the one who had made the promise was trustworthy.” (Heb 11:11)

These passages in the Sacred Scriptures enable us to reflect on the fact that our Community, the Missionaries of Divine Revelation, exists because a woman, our foundress, Madre Prisca, also made choices according to the light of faith and not merely human rationale. We would like to share with you some of the simple and extraordinary events of her life.

Concetta Mormina, who’s religious name was Mother Prisca, was born in Sicily (Ragusa) on the 18th April 1922 and died in Rome on 1st June 1988. Until she was 18 years old she lived in Africa, in Bengasi. In 1941 she returned Italy as a refugee and established herself, along with her mother in her birth place, whilst her brother sought his fortune in Argentina. Once established in Sicily she received an appointment from Catholic Action to take care of the Association for the Blind (1946-1948).

In 1948 Mother Prisca came to Rome to participate in a meeting between Catholic Action and Pope Pius XII and it was on this occasion that she first heard about the story of the Virgin of Revelation and visited the grotto at Tre Fontane. With a simple and spontaneous act, she left her beret at the statue of the Virgin of Revelation at the grotto. Following the death of her father from a tumour, she decided to move to Rome with her mother where they lived in very difficult conditions.

Bruno explained to her that the Virgin wanted her to follow him in realising an “opera” (or in English a “work or project”) with him and that this was the sign by which he would recognise who the Virgin had chosen to help him. With all her simplicity, Mother Prisca replied, “an opera? I don’t know how to sing or dance!”

Due to an unfortunate series of events, in particularly the unexpected death of her mother on the 28 April 1954, Concetta moved to Rome alone. Bruno offered her a place in his family. Mother Prisca was not too keen on the prospect of living with Bruno’s family as he was married with four children and the house was very small. Mother Prisca lived with the Cornacchiola family with much suffering and her only consolation was the mission and the catechesis when Bruno would explain the Holy Scriptures. By listening to the Word of God she existed and forgot all her sufferings.

Before taking any decision, Madre Prisca always took advice from Holy Priests – especially Mons. Guglielmo Giaquinta (founder of the Pro Sanctitate Movement) and Saint Giovanni Calabria (founder of the Congregation of the Poor Servants of Divine Providence) who encouraged her take forward the catechetical project. In 1954 Mother Prisca and Bruno founded a catechetical association of which she became the President until the end of her life.

The first group of Missionaries of Divine Revelation had shared many years with Mother Prisca and always remember her simplicity and humility but her strongest characteristic was her maternal welcome towards everyone she met. During the day, notwithstanding the work and the people who searched for her, she always was able to pray maintaining her fidelity to the recitation of the Holy Rosary and the celebration of the Liturgy of the Hours. During the night she devoted many hours to the adoration of Our Lord in the Blessed Sacrament. Her favourite prayer was Chapter 9 of the book of Wisdom, in which the young Solomon asked God for wisdom to act in accordance to His Will.

She loved the apostolate and developed the mission where ever she was. She was always encouraged by the words of Jesus to the Samaritan woman, “If you knew the gift of God” (Jn 4:10). She used all her energy, without ever holding back, to continue growing and maturing more profoundly the desire for a project of consecrated life as the Holy Mother Church intended. However, she was never able to take this project forward as she unexpectedly died in June 1988.

Inspired by her example, the first group of sisters realised her desire and on the 11th February 2001 her project became a reality because the Church gave the approval to construct a community with the name: Missionaries of Divine Revelation.

Just like Abraham, Mother Prisca didn’t live to see the ‘promised land’ but she has seen it from heaven! We always remember her words that encouraged us: ‘Keep and conserve in your heart, as the Virgin Mary did, everything that the Church has taught and teaches you. It is with Mary Mother of the Church that you will succeed in every undertaking”.

Madre Prisca placed herself in the school of the Virgin Mary, she believed the words of the Lord and the Missionaries of Divine Revelation can testify to the promised “opera” which, fortified by the faith, we would like to grow and develop.

This story is also an invite to you who read this letter to look at the simple things in our daily lives through the eyes of faith and this light will transform something ordinary into the extraordinary!