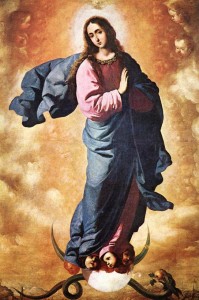 Meditation
In 1854 Pope Pius IX, in the Apostolic Letter ‘Ineffabilis Deus’, proclaimed the dogma which defines the Virgin Mary as immaculate, which means that she was ‘conceived without original sin’. All the sons of Eve have been ‘contaminated’ with original sin apart from Mary who was preserved from it by Divine Grace.

Centuries prior to the proclamation of the Dogma, the Immaculate Virgin Mary was loved and honoured by the faithful. The dogma did not confirm something ‘new’ about the Virgin Mary but merely confirmed the long held tradition of the Church. From the very origins of Christianity the faithful have honoured the Mother of Jesus. The Fathers of the Church of the East describe Mary as the ‘a seed not poisoned, a pure lily’. In the West, the doctrine of the Immaculate found many obstacles. Even St Bernard, called the ‘lover of the Madonna’ feared that in admitting the Immaculate Conception of Mary the Universal Redemption brought about by Jesus could be questioned. At the end of 1200, the Franciscan Giovanni Scoto overcame the doctrinal arguments affirming that Mary was also redeemed by Christ but by a pre-emptive redemption, outside time. She was preserved from Original Sin in proviso of Her Son’s merits.

From 1476 the feast of the Conception of Mary was introduced to the Roman calendar.

In 1830 the Virgin Mary appeared to St Catherine Laboure as the Immaculate.

In 1858, in Lourdes, St Bernadette Soubiros timidly asked the Virgin, who appeared to her, ‘Mademoiselle, would you be so kind as to tell me your name?’ The Virgin responded ‘I am the Immaculate Conception’. The Immaculate Virgin is the model of silent sanctity, the holiness of the little acts fulfilled every day with love that touches the hearts of those closest to us. Let’s imitate her, putting ourselves in her school.

The Catechism of the Catholic Church:
‘From among the descendants of Eve, God chose the Virgin Mary to be the mother of his Son. “Full of grace”, Mary is “the most excellent fruit of redemption” from the first instant of her conception, she was totally preserved from the stain of original sin and she remained pure from all personal sin throughout her life.’ (CCC 508)

The Word of God:
Blessed be God the Father of our Lord Jesus Christ, who has blessed us with all the spiritual blessings of heaven in Christ. Thus he chose us in Christ before the world was made to be holy and faultless before him in love…(Eph 1:3-4)