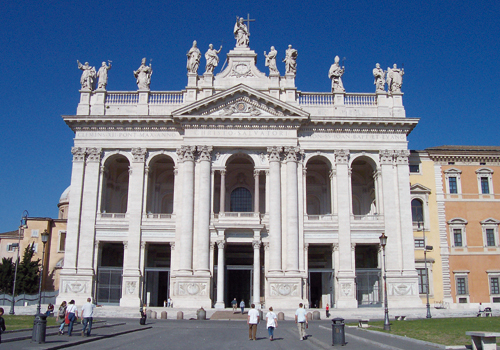 The objective of this visit is to help us understand the role of the Church in history. You will follow the story of the Emperor Constantine and the story of his conversion to Christianity and how the Cross, which was a symbol of shame for every Roman, became the symbol of victory. The visit follows the story of the twelve courageous men that fearlessly testified to their friendship with the Lord Jesus. The twelve apostles, present on the columns of the central nave of the Basilica, represent the columns of the Church. We will learn to read the ‘Bible of the Poor’ where we can follow the steps in the story of salvation and see how the Lord has always walked at man’s side.

The visit to the Baptistry shows you the place where the first Christian converts professed the Christian faith for the first time.

The meeting develops into a journey into Rome in the fourth century just after the liberation of Christianity from persecution in 312 AD. With the flight of the imagination we take all the young people to follow the catechumens who asked the Christian community to receive Baptism. In the night of the Easter Vigil we enter the vestibule of the Baptistry…..the first Baptistry where the early Christians proclaimed their faith in the Lord for the first time!