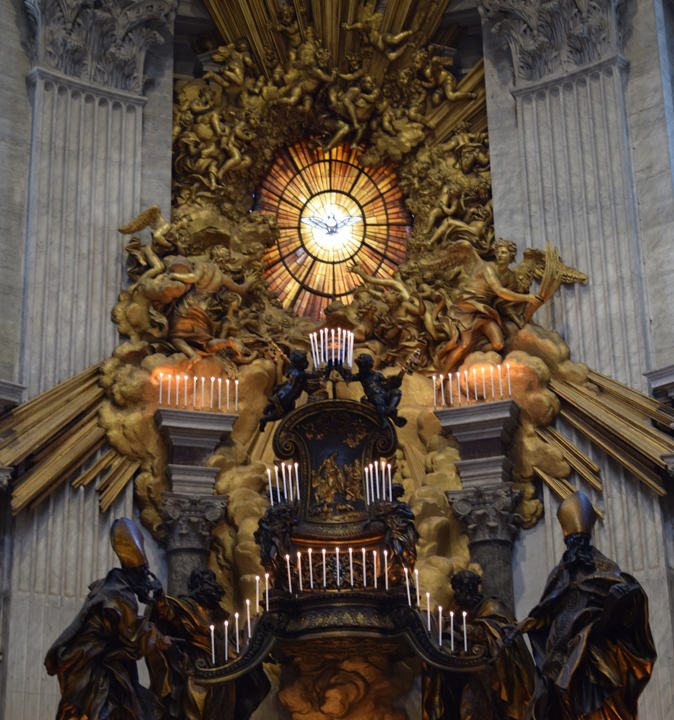 The ancient Feast of the Chair of Peter has been celebrated in the Church since the third century and was definitively established on the 22nd February by St Pope John XXIII. The Feast celebrates the mission and authority that Jesus entrusted to Simon, the fisherman from Galilee, to lead the people of God towards salvation as His Vicar.

St Peter’s Basilica, Rome has the privilege of being home to an extraordinary story that made the Mons Vaticanus, or the Vatican Hill, the definitive seat of the Roman Pontificate. It was here, in Nero’s Circus in 64A.D, that Peter confessed his faith in the Master by his death on a Cross. Even today, in that same place, the successor of Peter, the Pope, continues his mission to lead the flock on the strength of the authority that was conferred to Peter by Christ, “You are Peter and on this rock I will build my church. And the gates of the underworld can never overpower it. I will give you the keys of the kingdom of Heaven: whatever you bind on earth will be bound in heaven; whatever you loose on earth will be loosed in heaven.” (Mt 16:18-19)

This special Petrine mandate is sublimely summarised in the magnificent Cathedra Petri, Chair of Peter, commissioned by Pope Alexander VII and realised by Gian Lorenzo Bernini in the apse of the Vatican Basilica in 1666. The bronze masterpiece was made to contain the wooden seat of Peter, even if only a part of what remains today is dated to the time of the Apostle. Bernini’s Cathedra stands 7 meters tall, is gilded in bronze and surmounted by two putti each with a Papal insignia in hand. The significance of its decoration reflects the importance of the primate of the Apostle, who is the successor of Christ and Supreme Pastor of the Church as it makes its pilgrim way in the world. In addition, the back rest of the Cathedra was decorated with a great golden bas- relief that portrays the Pasce oves meas or Feed my Sheep scene by Giovanni Paolo Schor based on Bernini’s own design. On the sides of the work are the related episodes of the Washing of the Feet and the Handing of the Keys. All these scenes revolve around Peter’s special mission: to confirm his brothers in the faith. He is sustained in this mission by the Bishops in communion with him. In fact, the compositional structure of the work is almost propelled heavenwards whilst remaining united to the earth through the statues at its base. The statues represent two Fathers of the Church from the East, St Anastasius and St John Chrysostom, and two Fathers of the Church from the West, St Ambrose and St Augustine. With a passionate love for the truths of the faith, they defended the Church from the heresies of their times and their writings and homilies are a clear reference for the preservation of the deposit of the faith. 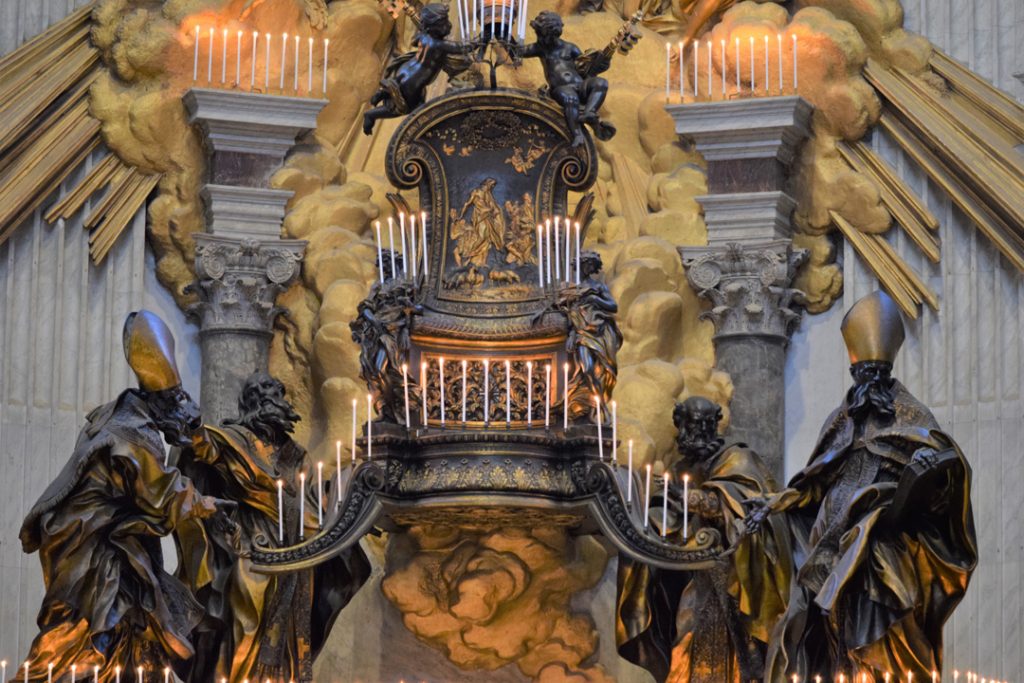 In Bernini’s artistic wisdom, he placed the Cathedra in an ascent towards heaven where the window of the Holy Spirit, surrounded by the angels, clouds and rays of sunlight, shines forth. From this window to heaven, the light that illuminates the entire work enters the Basilica.

The propulsion of the Cathedra towards the Holy Spirit situated overhead, is a symbol of the Church on its journey towards the Kingdom of Heaven under the inspiration of the Paraclete. The monument shows both the ascent of the Church under the leadership of the Holy Spirit and, at the same time, the descent of the same Holy Spirt as He leads the Church. It is in this meeting between human weakness, like that of Peter, and the power of God that enables the Church to fulfil its mission each day as it makes its heavenward journey.