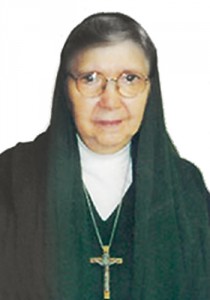 Mother Prisca (1922-1988) entered this story in silence; she was the first woman to follow and gather the treasure of the Virgin of Revelation and, progressively, donated herself in her simple every day life.

Concetta Mormina, whose religious name was Mother Prisca, was born in Sicily (Ragusa) on the 18th April 1922 and died in Rome on 1st June 1988. Until she was 18 years old she lived in Africa, in Bengasi. In 1941 she returned Italy like a refugee and established herself, along with her mother in her birth place, whilst her brother sought his fortune in Argentina. In Sicily she received an appointment from Catholic Action to take care of the Association for the Blind (1946-1948) a mission to which, animated by an intense apostolic zeal, she dedicated herself body and soul.

In 1948 Mother Prisca came to Rome to participate in a meeting between Catholic Action and Pope Pius XII and it was on this occasion that she first heard about the Virgin of Revelation of Tre Fontane. Intimately attracted to this story, she decided to move to Rome with her mother (her father had already died of a tumour) though living in very poor conditions. To support herself she worked in a laundry that was managed by a group of religious lay people. This group was the first nucleus of a ‘Movimento Pro Sanctitate’ founded by Monsignor William Giaquinta, who eventually became her confessor and spiritual guide.

In 1954 Mother Prisca and Bruno founded a catechetical association of which she became the President until the end of her life. There were difficulties and discouragement at the start of the foundation but a meeting with the man who would become Saint John Calabria in 1954, gave her the encouragement to move forward without hesitation.

Mother Prisca was a simple woman, humble, devout, and especially maternal, characterized by a deep love for the Eucharist, the Virgin Mary, the Word of God, the ordained priesthood and an intense life of prayer. In particular, the love and desire to imitate Mary marked her entire life, which was a constant meditation on the Word of God. Aware of her lack of formal education, she loved to call herself ‘the Lord’s donkey’ making reference to the Prophet Balaam’s donkey. She loved the apostolate performing her mission where ever she found it finding encouragement from the words of Jesus ‘If you knew the gift of God’ (Jn 4:10). She used all her energy, without ever holding back, to continue growing and maturing more profoundly the desire for a project of consecrated life as the Holy Mother Church intended.

After her peaceful transit to heaven her project became a reality. Her track traced, her first sisters became the seeds of the Missionaries of Divine Revelation. Her marvellous example of donation and love for all was and will be for us a secure guide to lead souls to love of the Catholic Church.

‘Keep and conserve in your heart, as the Virgin Mary did, everything that the Church has taught and teaches you. It is with Mary Mother of the Church that you will succeed in every undertaking’.