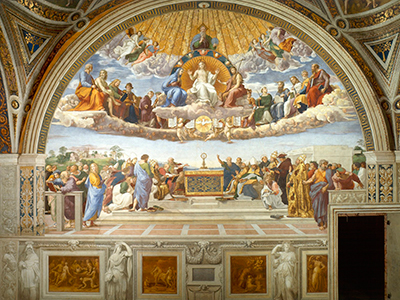 In this month of June, in which we are preparing to celebrate the feast of Corpus Christi, we will delve into the explanation of the Disputation of the Blessed Sacrament (1509) by Raphael that was realized in one of what is commonly recognised as Pope Julius II apartments in the Vatican: the room of the Segnatura.
Raphael, with his pictorial wisdom and his impeccable fresco composition, succeeded in making it clear that the life of the Church and that of the faithful revolves around the core of our faith: the true presence of Jesus in the Blessed Sacrament.

It is inevitable to note that the work is divided into two parts, one superimposed above the other, in which the Triumphant Church (Ecclesia Triumphans) and the Militant Church (Ecclesia Militans) are represented respectively.
In the inferior part of the work we can quickly see how the Militant Church is discussing the nature and the profoundness of this Eucharistic mystery that, as we have already said, was made the focal point of the masterpiece by the artist. In this section of the work Raphael depicted theologians, doctors of the Church, Popes and also authors, philosophers and humble believers. This image manifests the fact that for centuries the Church has deepened its appreciation and understanding of the incommensurable gift of the Eucharist because Holy Communion, differing from the other sacraments that bring God’s gifts, contains God Himself. The Church has always been fed on this Eucharistic bread that was given to us by the Lord who, not content with dying for our Salvation, wanted to remain with us in every Tabernacle in the World so that we could be intimately united with Him. Illustrating this very point St Cyril of Alexandria taught, “those who receive Jesus Christ in Holy Communion, are so united to Him that they are like to two pieces of wax that are melted together, which in the end become only one.”

Still looking at the Militant Church we can observe how Raphael has created an upward movement starting from the arm of the person indicating heaven until we reach the iconographic depiction of the Holy Spirit in the form of a dove. At either side of the Holy Spirit are the angels that are presenting the four Gospels. Jesus’ words and actions during His earthly life are recorded upon these pages and they transmit all that the Father wanted to be revealed to us through His Son.

Now we pass into the upper portion of the fresco and we pause for a moment to analyse the Triumphant Church. The Most Holy Trinity, the Virgin Mary, St John the Baptist and a large array of prophets, angels and saints stands out in the scene. There is a clear vertical line that unites the Father, Son and the Holy Spirit. It is particularly important to note that Our Lord is depicted as the risen Lord. Indeed, it is through His resurrection that His body, that now stands outside space and time, can be present in the Sacred Host on the earth thereby fulfilling His promise: “behold, I am with you always, until the end of the age.” (Mt 28:20)
One can also see that the whole scene is grafted upon the sign of the cross. The vertical arm is from God the Father until the Blessed Sacrament and the horizontal arm is constructed by the array of the saints. This image helps us as it is almost a reminder for us all that the cross is the means of our salvation and it was upon the cross that the Son of God was sacrificed!

At the end of this illustration let us pray for the Lord to give us the grace to love ever more fully our Lord in this Divine Sacrament, making our prayer the words of St Thomas Aquinas in the hymn Adoro Te Devote, written on the occasion of the introduction of the feast of Corpus Christi in 1264.

Jesus, whom now I see hidden,
I ask you to fulfill what I so desire:
That the sight of your face being unveiled
I may have the happiness of seeing your glory. Amen