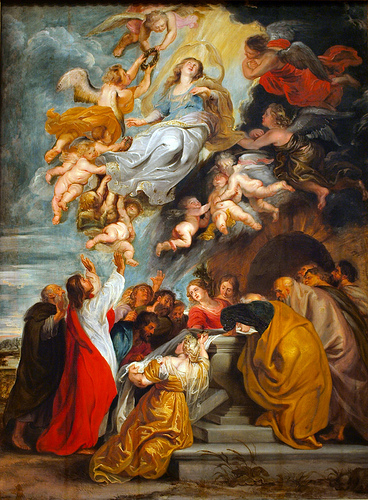 The truth that Our Lady was assumed into heaven was always believed and celebrated by the Church although it was not considered a dogma of the Faith until the 1st November 1950. From very ancient times, the Church in the east and west solemnly celebrated a liturgical feast in memorial of the “Dormition of Mary” or the “Assumption of Our Lady into heaven”. In the Gregorian Sacramentary which Pope Adrian I sent to Charles the Great between the years 784-790 one finds the following original text: “Venerable to us, O Lord, is the festivity of this day on which the holy Mother of God suffered temporal death, but still could not be kept down by the bonds of death, who has begotten Thy Son Our Lord incarnate from herself.”

Pope Pius XII took account of the numerous providential requests from the Cardinals of the Sacred College, Archbishops, Bishops, people from dioceses and from parishes and in fact from entire people of God who had made supplication for the definition of the dogma of the faith with regard to Mary’s bodily Assumption into heaven. On the 1st May 1946 Pope Pius XII decided to send an encyclical letter entitled “Deiparae Virginis Mariae” to his venerable brother Patriarchs, Primates, Archbishops, and other Ordinaries at peace and in communion with the Apostolic See regarding the proposal to definitively define the dogma of the Assumption of the Virgin Mary. In this letter, the Holy Father asked that they “raise insistent prayers to God so that He might clearly manifest the will of His ever-adorable goodness in this instance” (Pope Pius XII Deiparae Virginis Mariae no 3) To that end, the Holy Father asked His venerable brothers if they believed that the Church could propose and define as a dogma Our Lady’s Assumption into heaven and if this was the belief and the desire of the Priests and members of the Catholic faithful in their communities.

Whilst the response of the great majority of Bishops was favourable to this proposal, something happened in Rome that seemed to be the divine confirmation in response to the Holy Father’s request. On the 12th April 1947, the Virgin Mary appeared to Bruno Cornacchiola and invited him to re-enter the Catholic Church that he had been persecuting. Amongst other things, Our Lady spoke of her bodily Assumption into heaven saying: “My body could not decay and did not decay I was taken to heaven by My Son and His Angels”.

Pope Pius XII was informed of the events at TreFontane and believed in the apparition. He blessed the statue on the 5th October that same year. The statue was of a natural magnitude and is still in site at the Grotto of the Virgin of Revelation at Tre Fontane today. This episode also contributed to the definition of the dogma.

Finally, on the 1st November 1950 with the proclamation of the Apostolic Constitution “Munificentissimus Deus” Pope Pius XII made the solemn proclamation that “we have poured forth prayers of supplication again and again to God, and have invoked the light of the Spirit of Truth, for the glory of Almighty God who has lavished his special affection upon the Virgin Mary, for the honor of her Son, the immortal King of the Ages and the Victor over sin and death, for the increase of the glory of that same august Mother, and for the joy and exultation of the entire Church; by the authority of our Lord Jesus Christ, of the Blessed Apostles Peter and Paul, and by our own authority, we pronounce, declare, and defineit to be a divinely revealed dogma: that the Immaculate Mother of God, the ever Virgin Mary, having completed the course of her earthly life, was assumed body and soul into heavenly glory”.