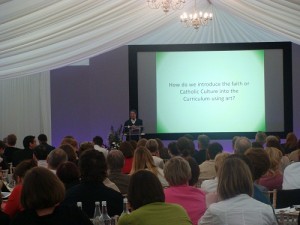 The beginning of July marked the start of our ‘summer’ mission to England. We had a packed schedule and a programme of traditional catechesis and workshops of ‘catechesis with art’. This year our mission crossed 3 large English Diocese: Liverpool, Shrewsbury and Birmingham and each stop introduced us to new friends in the Lord!

Our first meeting was with our Catechetical Prayer Groups at Holy Family Birkenhead and St Richards Skelmersdale and we met to discuss the theme of the “Year of Faith” which will start on the 11th October 2012. 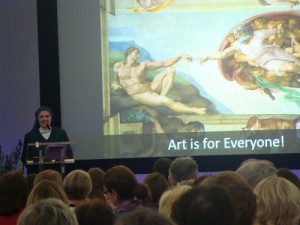 The meetings with the groups were very lively and they were able to raise all their challenging questions about living the Catholic Faith in our times!

During our Catechesis we echoed the Holy Father’s call to meditate on the profound significance of the Creed. We summarised the Creed’s three main parts: God the Father, the Son and the Holy Spirit and we proposed points for meditation and a more profound realisation of its significance. St Augustine called the Creed “the short, yet great rule of Faith”.
It is short because it only has few words and great because it contains all that Catholics have received from Christ and what was handed down by the Apostles.
We concluded by encouraging the members of the Parish Community to learn more of the lives of the English Martyrs during the Year of Faith because their testimony can certainly inspire us in our own faith.

Next, we were off to St Mary’s College, Oscott, to take part in a Diocesan Education Conference where we were presenting our ideas of how art can be used as a tool to talk about aspects of the faith in the Catholic Schools. Using images like Raphael’s transfiguration,
St Peter’s Basilica and a piece of the Berlin Wall we gave a representation of how these images can bring forth wonderful stories of the faith and also highlight how the Catholics have contributed to the development of humanity. Sr Emanuela encouraged all present with the message that ‘art is for everyone and not be afraid to look at the religious masterpieces sharing them with the young people and so transmit our faith – especially in the Year of Faith!’ 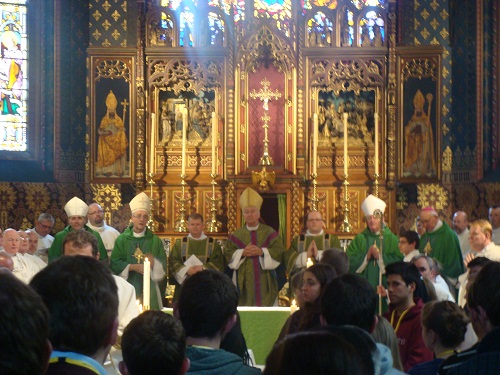 The weekend of the 6th to the 8th July also saw the start of the Invocation Vocations Festival at Oscott. This was attended by over 400 young people who are all thinking about
what their vocation might be. There was the opportunity to pray especially in Eucharistic Adoration and also time for conferences, workshops and the ability to ask the many religious represented those burning questions about the Priesthood or Religious life.
The Missionaries presented our “faith and art” workshop on the theme of the Lord’s call. We used some of the wonderful images from the Sistine Chapel to show how art can also help us to meditate on the Lord’s call – or our vocation- by reliving the lives of the Saints.

Summing up the session we spoke of St John’s memory of his first meeting with Christ that changed his entire life as he remembered over 60 years later that “it was four in the afternoon” (Jn 1:39)! We concluded by encouraging the young people to also have that personal encounter with Christ using the words of the Holy Father, Pope Benedict XVI:

“Being Christian is not the result of an ethical choice or a lofty idea, but the encounter with an event, a person, which gives life a new horizon and a decisive direction.” (Deus Caritas Est No 1) 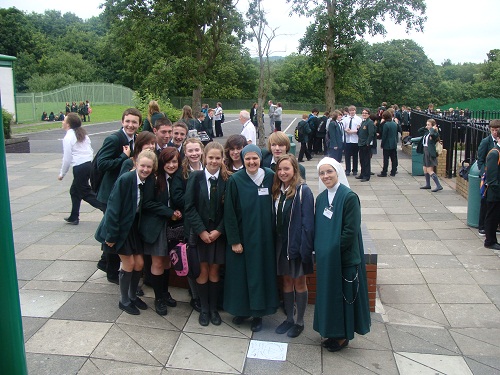 During the last days of our mission to England we visited a number of Colleges to talk to the young people about the Project that God has for everyone! At Our Lady Queen of Peace College, Skelmersdale the whole school listened attentively to hear Sr Emanuela talk about the story of the Virgin of Revelation and God’s Project for our happiness using some of the most famous works of art in the world by Michael Angelo. Then the young people asked lots of questions about the religious life and in particular our distinctive green habit! They were moved by Sr Benedetta’s story of her journey to the religious life which started when she was just 17 years of age! Sr Benedetta started by telling the young people that she was just like them …and how her journey really began with lots of questions about the Catholic Faith and a meeting with the Missionaries!

At the end of the day the Head Teacher, Mr Smart, presented the Missionaries of Divine Revelation with an original piece of art designed in the school that is called “Protection”. It now has pride of place in our convent! 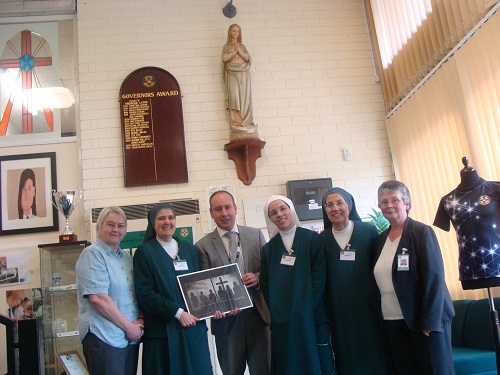 Finally, on the morning of our departure for Rome we were called on the last moment to take part in a Vocations Day at St Joseph’s College, Stoke. During this day the young people have the opportunity to ask Priests, Religious and also married couples of their experience of living out their vocation. We were bombarded with lots of questions: Why do you wear green? Why wear a habit? How do you know if you are called to be a Sister? Why did YOU become a Sister? What is it like to live in Rome? After 3 hours of interesting and lively questions it was time for a quick dash to the airport for the plane back to Rome.

We concluded our mission praying that Our Lord, through the intersession of the Virgin of Revelation, would bless all our new found friends and England’s shores. We now look forward to our return visit in December!