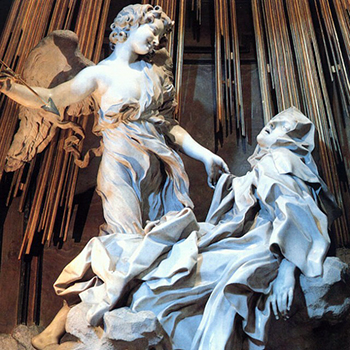 This month’s newsletter is dedicated to St Teresa of Jesus, better known as St Teresa of Avila, because her 500th anniversary celebrations open this month and will last throughout 2015. St Teresa is famous as she was the reformer of the Carmelite order. Although she entered the convent at 20 years of age, her real conversion came somewhat later in life following a vision of the Lord. Her story is amongst one of the most famous conversion stories in the lives of the saints and it reminds us all that it is never too late to place ourselves definitively in the Lord’s service. St Teresa is famous for her great spiritual works which include classics entitled: The Interior Castle, the Way of Perfection and her Autobiography. The latter work proved to be the fount of inspiration for the creation of the sculptural masterpiece, the Esctasy of St Teresa, by one of Italy’s most famous sculptors of the 17th Century: Gian Lorenzo Bernini.

The Esctasy of St Teresa (1647-1652) is considered one of the great masterpieces of baroque art. The work was realized in the 17th Century by Gian Lorenzo Bernini for the Cornaro Chapel in the Church of Our Lady of Victory, Rome.

The sculpted group, composed of St Teresa and the angel, realised entirely in marbel, emerges magestically above the altar in the left transcept of the Church. This work is enclosed in a neiche that perfectly preserves the intimacy of the Saint’s ecstasy and does not allow the onlooker to be distracted from the mystical event by the inclusion of superfluous details.

The compositon of the piece allows us to glimpse the most mysterious mystical event in the Saint’s life and to see how that touch of heaven wounded the saint from that moment onwards. In fact, just as in the saint’s autobiography, the angel in the masterpiece is depicted in the act of wounding St Teresa’s heart with an arrow rendering her evermore replete with the love of God. The statue of the Saint seems to be suspended in the clouds which once again evokes the feeling of an ethereal experience. Bernini’s mastery in the use of marbel is indisputable. The body of the saint, completely enraptured, permits one to glimpse that moment of extreme intimacy with the Lord. The saint’s reclining head is similar to Christ’s head in Michael Angelo’s masterpiece, the Pietà. Her gaze reveals the sweet pleasure with which God has enveloped her soul.
The light that seeps out of this sculpture composition comes from a small opening slightly above the statue which is covered by tympanum. This positioning permits the sun’s rays to illuminate the scene and to confer the auora of spirituality upon the whole piece.

In her autobiography, St Teresa, who was granted the grace of mystical ecstasy for a large part of her life, confesses that she was unable to resist this mystical grace from the Lord. It is a gift that the Lord grants to certain chosen souls as a means of elevating their gaze ever more towards heaven. Let us too contemplate the sweetness of the meeting with the Spouse such that we can also ardently desire to live totally in His service. Let us not think of our weakness and our limits but, as St Teresa says, “whoever has God lacks nothing; God alone suffices.” Therefore, may we also yearn for sanctity and the God of all goodness will fill all the desires of our heart abundantly.