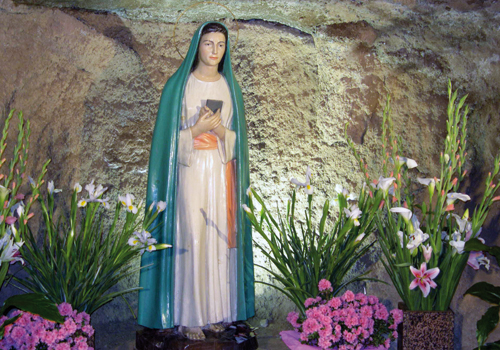 It is a spring day in which life seems to awaken after the horrors of World War II.

In the Ostiense Station, Bruno Cornacchiola (1913-2001), a Roman tram driver aged 34, together with his children Isola 11, Carlo7 and Gianfranco 4, missed the train for Ostia and instead headed for Tre Fontane (Three Fountains) the place where St Paul was martyred and also popular with children because of the handmade chocolate produced by the Trappist Monks. Bruno searched for a quiet place to prepare a speech that he was giving the next day entitled ‘Mary is neither ever Virgin nor immaculate’. For Bruno this was an opportunity to become an Adventist Pastor and redeem a past spent in misery and religious ignorance. He was converted to Protestantism by a German Lutheran Soldier during the Spanish Civil War (1936-1939) and he became an enemy of the Catholic Church. Blinded by hatred, Bruno bought a dagger to murder the Pope. Returning home, he forced his wife Iolanda to also become a protestant. She reluctantly agreed after trying to dissuade him by asking him, as a final hope, to make the nine first Fridays devotion to the Sacred Heart of Jesus.

Bruno sat below a eucalyptus tree, browsing the Bible and started making notes while his children played ball in a clearing near a grotto dug out of the earth that was dark and smelly. 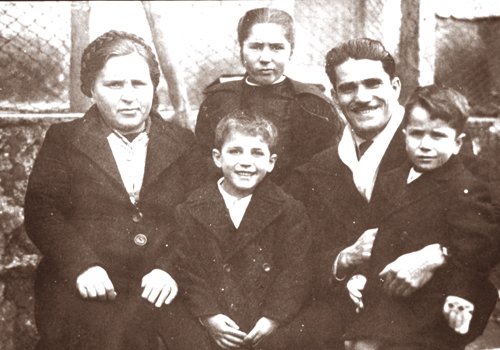 Bruno was preparing his speech when the voices of his children interrupted him saying, ‘daddy the ball is lost’. He started to search for the ball, but his children fell to their knees, one after the other in front of the dark grotto and with their hands joined together they repeatedly said, ‘beautiful lady, beautiful lady’. Bruno wasn’t able to physically move the children and frightened he exclaimed, ‘God Save Us’. At this moment a veil fell from his eyes and he also saw the ‘beautiful lady’ with bare feet resting on a block of turf. She had a maternal gaze, with black hair covered by a long green mantle, a white dress and a pink band encircling her waist. She spoke to Bruno and with a soothing voice she said, ‘I am the Virgin of the Revelation. You persecute me. Enough now! Return to the Holy Fold on earth (the Catholic Church).

The heavenly conversation lasted for one hour and contained a message to be delivered to the Holy Father. The Mother of God held in her right hand a grey coloured book: The Sacred Scriptures, and with Her left hand indicated the black vestments of the priesthood next to a broken cross.

At the end of the heavenly meeting, Mary smiled, took two steps turning towards St Peter’s Basilica before the vision disappeared whilst a sweet perfume pervaded the grotto.

The First link between Heaven and Earth 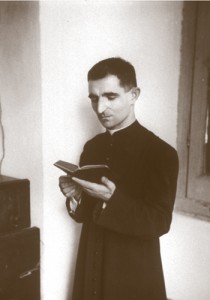 In order to give Bruno confirmation that the apparition was real, the Virgin gave him a sign. Bruno had to search for a priest and introduce himself with the following question; ‘Father, I must talk to you’ who would respond ‘Hail Mary my son, what do you want?’

Mary indicated to Bruno, and through him all of us, that the return to God begins with the Priest, as he is the first link between heaven and earth. When the Priest celebrates Holy Mass he unites us ‘with the heavenly liturgy and anticipates eternal life when God will be all in all’. Catechism of the Catholic Church 1326. 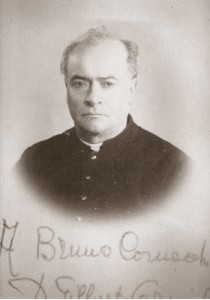 Between the 12th and 28th April 1947, Bruno searched desperately for the appointed Priest praying in the night requesting the help of the ‘Beautiful Lady’. As a last attempt, Bruno’s wife Iolanda advised him to go to his local Parish Church called All Saints. Trying not to be seen, Bruno entered the sacristy and said to the Priest; ‘Father I must talk to you’. Father Frosi responded; ‘Hail Mary my son,’ and with this phrase gave Bruno the confirmation he had been searching for. Father Frosi indicated another Priest, Father Gilberto Carniel who helped Bruno and his family return to the Catholic Church on the 7th May 1947.