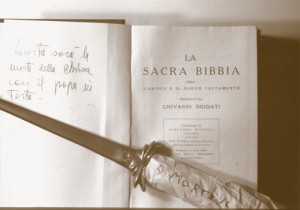 A dagger for Pope Pius XII
On the 9th December 1949, a group of Roman Tram Drivers recited the Holy Rosary in the private Chapel of Pope Pius XII. At the end of the Rosary Pope Pius XII asked, ‘which one of you wants to speak to me?’ Bruno stepped forward and kneeling down asked for forgiveness for intending to kill the Holy Father. Bruno presented Pius XII with the Protestant Bible and the dagger with the inscription ‘Death to the Pope’ on the handle. The Holy Father responded smiling, ‘My dear son, by doing that you would have added a new martyr to the Church and a new Pope!

A Confirmation For The Church

On the 1st May 1946 Pius XII, in the letter ‘Deiparae Virginis Mariae’, invited the Bishops and people of God to ‘offer insistent prayers to God that he might clearly manifest His Will of His ever adorable goodness…’ regarding the possibility of defining the Dogma of the faith in the Assumption of the body of the Blessed Virgin Mary into heaven.

As a confirmation of the theological work, on the 12th April 1947, Mary said to Bruno ‘My body could not decay and did not decay I was taken to heaven by my Son and His angels’ and so the Virgin gave the heavenly confirmation that the Pope had requested.

On the 1st November 1950 Pius XII proclaimed the Dogma of the Assumption. Like Mary, for mankind too there is the certainty that ‘…this perishable nature of ours must put on imperishability, this mortal nature must put on immortality’ (1 Cor 15:53)

The Thoughts of the Church

In order to understand the procedures of the Church with regard to private revelations we remember the words of the then Cardinal Ratzinger, Prefect for the Congregation of the Doctrine of the Faith, in an interview he gave to a Vittorio Messori which was published in a book called ‘The Ratzinger Report’. The Cardinal explained as follows:

‘No apparition is indispensable to the faith, Revelation finished with Jesus Christ. He, Himself, is Revelation. Yet we cannot impede God from speaking to our times through simple persons or by way of extraordinary signs that denounce the insufficiency of our culture that dominates us, disguised as rationalism or positivism. The apparitions that the Church has approved officially ….have their precious place in the development of the life of the Church in the latest centuries. They show, between one another, that Revelation – being unique, is concluded and therefore is not surmountable – but it is not in this way dead, it is life giving. Of those that remain, one of the signs of our times is that the number of ‘Marian Apparitions’ are multiplying in the world….’. The Cardinal then continues: ‘…One of our criteria is to separate the aspect of the truth or ‘supernaturality’ of the apparition from that of its spiritual fruits. The ancient Christian pilgrims directed themselves towards places in respect of which our modern critical spirit would be baffled at the lack of ‘scientific verification’ of the tradition to which they are attached. This doesn’t take away that those pilgrimages are profitable, beneficial and important for the life of the Christian people. The problem is of the evaluation of the vitality and orthodoxy of the religious life that develops around these places.’

It is important to underline that with regard to the apparitions, called private revelations, one must speak directly to the diocesan Bishop that, in the dioceses of Rome, is the Holy Father. Now the Pope, as can be clearly understood, cannot bind the authority of the Magisterium regarding private revelations and so he delegates this work, in this case to the Vicariate of Rome. In this regard there is already a precedent to refer to: In 1842 the Vicariate of Rome approved the apparition of the Virgin Mary to Alphonse Ratisbonne in the Church of Saint Andrew delle Fratte in Rome.

On the 5th October 1947 the statue of the Virgin was blessed by Pope Pius XII in St Peter’s Square and from there it was transported to Tre Fontane. 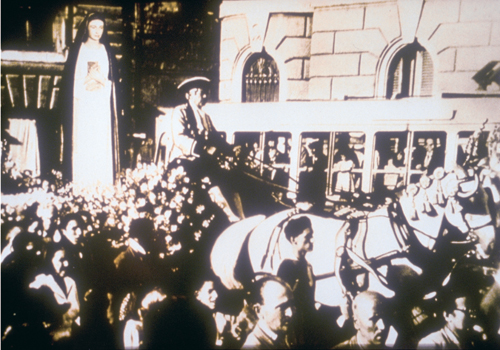 Delineated below, therefore, are the steps already made by the Vicariate of Rome in the story of the Virgin of Revelation at Tre Fontane:

In 1956 the Vicariate of Rome trusted the custody of the Grotto to the Franciscan Conventual Friars Minor, already having been trusted in 1955 to the Parish of Saint Peter and Paul as the Grotto resides within its parish boundaries.

In 1982 the Vicariate of Rome established a committee to raise funds for the construction of a sanctuary. The President of the committee was Monsignor Pietro Bianchi; the first phase was to build an altar in the chapel in front of the Grotto for the celebration of the Holy Mass.

On the 12th April 1987, the 40th anniversary of the apparition, Cardinal Vicar Ugo Poletti visited the Grotto and presided over the solemn celebration of the Holy Mass.

In 1993 the Vicariate of Rome bought the ground where the grotto is situated from Ent EUR, for the construction of a future sanctuary.

In 1997 on the occasion of the 50th anniversary the Vice General Bishop Cesare Nosiglia presided over the celebration of the Holy Mass.

In 1997 the Holy Father, Pope John Paul II approved the renaming of the sanctuary as ‘Holy Mary of the Third Millennium at Tre Fontane’.

On the 11th February 2001 Cardinal Vicario Camillo Ruini approved the statutes of the Missionaries of Divine Revelation.

We remember the testimony of the late lamented Cardinal Vicar of Rome, Ugo Poletti who, referring to the apparition at Tre Fontane, said:

‘Usually one is asked: But is there official recognition of the Church? This is not a problem. It is not so much the problem of official recognition of the event in itself but its message, its merit, its significance. God chose, continued the Cardinal Vicar, many times directly or through His Mother, to open meeting places between suffering humanity, Himself and His love. This is one of those places. One opens, then a spring of grace from the apparition at the Grotto at Tre Fontane. This is important. I am happy to say this to praise the goodness of God that wished to appear here at the entrance to Rome, a place surrounded by the pleasures of the world, He wished to open a spring of His grace and love honouring and glorifying his Mother. I am happy to give this testimony and I would like you to reflect and to search for God, not in clamour but to search for Him in love, in goodness, in His mercy always by means of Mary. It is by means of Mary, that the Lord God in Jesus our Divine Saviour has trusted the task of opening the closed eyes of many men to God’s Divine Revelation, that don’t want to believe. This is the merit and significance of the sanctuary at Tre Fontane, the Virgin of Revelation.