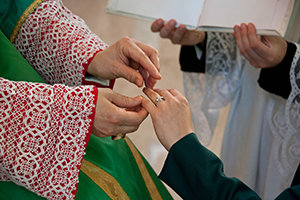 It is important to highlight the fact that the way we often speak about “becoming a Sister” is mistaken. It is rare that someone sets out to “become” a Sister in the same way that they become a teacher or an accountant. It is rare that someone sets out to consecrate themselves  to God (to set themselves aside from the world for the Lord)  as if it is something that depends only on their choice.  Rather, we should consider that if there is a calling, there must be Someone Who calls! Therefore, it is more accuarate to say that one becomes a sister by responding to a call received rather than just simply making a career decision. In addition, the call that is received is from the Beloved who calls us to Himself and so it is always a response of love!  The Scriptures are clear about the fact that it is Our Lord who calls because He said: “You did not choose me but I have chosen you….” (Jn 15:16).

It is the Lord Who has chosen a person to become a Sister for the project of happiness that He had in mind from the very beginning. Therefore, the soul may feel the “attraction” to “become” a Sister but this is really a way of articulating the fact that the Lord has placed a desire for Him in their hearts. To become a Sister is nothing other than the decision to respond to the Lord with a “Yes” in the same way as the Virgin Mary said to the angel: “I am the servant of the Lord, let what you have said be done unto me” (Lk 1:38).