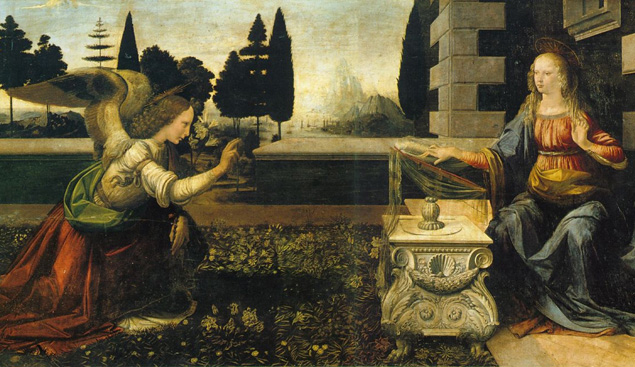 In this month we would like to consider the part of St Luke’s Gospel that recounts the episode of the Archangel Gabriel’s Annunciation to Mary (Lk 1:26-38).

This part of the Gospel starts with the apparition of the angel Gabriel “to a virgin betrothed to a man named Joseph, of the house of David, and the virgin’s name was Mary” (v 27). As you can see, twice in the same verse it is highlighted that Mary is a virgin and it will be repeated again in verse 34 when she said to the angel, “How can this be, since I have no relations with a man?” This repetition is due to the necessity to highlight this truth so that we may understand the extraordinary way that Mary conceived the Lord.

St Luke the Evangelist highlights the fact that the angel appears to Mary in her city of Nazareth, in her own home, to express that God enters into the events in our everyday lives and transforms them.

The angel greets Mary calling her with the Greek verb “Kecharitomene” that is normally translated as “Hail, favoured one!” However this translation doesn’t help us to understand the rich significance of that expression. It is a Greek verb in the perfect passive tense. In Greek, this tense indicates an action that was initiated in the past but the effects remain in the present. The passive part of the verb expresses an action incurred by the person. The verb “Kecharitomene” therefore indicates the divine initiative in Mary’s life that happened in the past and has its effects that persist also in the present. The expression “Kecharitomene” could have been translated as: “You that God has filled with His grace”. The grace that Mary is filled with doesn’t exempt her from the effort and hard work to enter into God’s project.

The angel then says to Mary: “The Lord is with you”. At different times in the Old Testament this expression was used to indicate God’s help and protection to complete His mission. God assures His protection to Jacob, to Moses, Gideon and so Mary is placed amongst the great biblical figures that had received a particular support from God in view of the mission that they had to complete. Mary was greatly troubled and so the Angel gave Mary his assurance saying, “Do not be afraid, Mary, for you have found favour with God” (V30).

The Angel then announces her mission: “Behold, you will conceive in your womb and bear a son, and you shall name him Jesus. He will be great and will be called Son of the Most High, and the Lord God will give him the throne of David his father, and he will rule over the house of Jacob forever, and of his kingdom there will be no end.” (vs 31-33) Mary asked the angel how would this annunciation would be fulfilled, which is understandable given the greatness of the news. Unlike Zachariah at the annunciation of the birth of St John the Baptist, Mary didn’t doubt as she was already open to fulfil God’s Will, she merely wanted to understand how the words of the angel would be fulfilled.

Then the angel gave her his explanation: “The holy Spirit will come upon you, and the power of the Most High will overshadow you. Therefore the child to be born will be called holy, the Son of God.” (v35) The Holy Spirit would descend upon Mary as at Pentecost when He would descend on the Apostles. The Greek verb used by Luke is, in fact, the same that the author of the Acts of the Apostles would use to describe the descent of the Holy Spirit on the Apostles at Pentecost. Also the verb “will come upon you” is the same verb that the Old Testament used to indicate the cloud that covered the Tent of meeting, where God had established His resting place amongst men. Here, therefore, the words express not only the presence of God in the Baby, but the fact that this baby is the Son of God.

To confirm his words the angel gave Mary a sign: “And behold, Elizabeth, your relative, has also conceived a son in her old age, and this is the sixth month for her who was called barren; for nothing will be impossible for God” (v36-37).

Upon the words of the Angel, Mary was no longer afraid and with great trust she gave her agreement to God’s Will: “Behold, I am the handmaid of the Lord. May it be done to me according to your word.” (v38)

Mary described herself as “the handmaid of the Lord” And in this way recalls all the history of those who said “yes” to the Lord: Abraham, Jacob, Moses, David the suffering servant described by the Prophet Isaiah.

With her “yes”, Mary became the model of every vocation, the model for believers and the Church who was called to adhere to God’s will and place herself in His service. Let us also learn to say “yes” to God in every circumstance of our lives, allowing ourselves to take Mary’s hand as she is our Mother and the Mother of the Church.