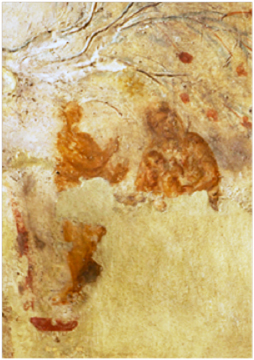 Where? Let’s go below the ground to look at the Churches first historic archive, to relive the authentic message of the Creed of the first Christians. We descend into St Priscilla’s Catacombs in the Via Salaria, Rome.

The Catacombs are a place of rest. In naming their burial grounds the first Christians used a vocabulary that was strange at that time, a different terminology from the pagans who referred to their burial grounds as a ‘necropolis’ or the ‘city of the dead’. The first Christians used the word ‘coemeterium’ from which the word ‘cemetery’ and it was used to indicate a ‘place of rest’ until the Resurrection!

In St Priscilla’s Catacombs we find the most ancient image of the Virgin Mary realised in the primitive Pompeian style dated from the end of the second or the start of the third century. It portrays the Virgin with Child on her knee. To Her side there is a man holding a scroll and with his right hand he is indicating a star. The man is the prophet Balaam form the Book of Numbers in the Old Testament. Balak, King of Moab, wanted to mobilise magical powers and bring down curses upon Israel in order to stop the people advancing towards the promised land. To enable this wicked intent, Balak called the celebrated fortune teller, Balaam. Balaam was an upright man of good faith and in the hands of the true God became a prophet and so unable to curse Israel. In fact, every time he tried to curse them a blessing came forth from his mouth. After the third attempt at cursing Israel without success Balaam realised that God favoured Israel and filled with the Holy Spirit prophesied: ‘I see him – but not in the present, I behold him, but not close at hand: a star from Jacob takes the leadership, a sceptre arises from Israel’. (Num 24:17)

This prophecy is symbolic of the freedom brought by the Old Covenant but also the plea of a humanity that saw in the child the Messiah who was awaited for Centuries.