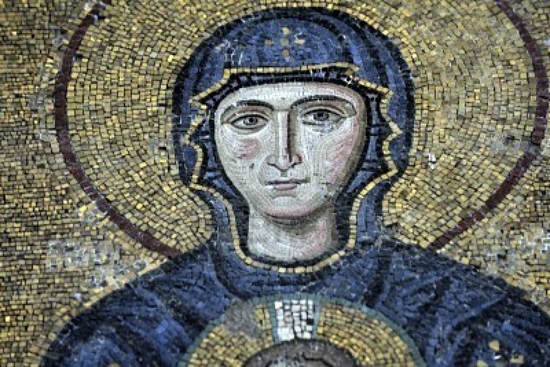 We recall the words of the Virgin of Revelation who, with her maternal goodness, came to recall a lost son, and therefore all of us, to conduct ourselves in a way that does not deviate towards “strange doctrines” (Heb 13:9) but is conduct that is worthy of a Christian.

On the 12th April 1947, the Virgin Mary appeared to an anti-clerical protestant, Bruno Cornacchiola, who had the primary intention of killing Pope Pius XII. Bruno held an important role in the Seventh Adventist Sect and had been called upon to host a conference to discredit Catholic Doctrine with regard to belief in the Virgin Mary, and in particular her Immaculate Conception and Assumption into heaven.

Bruno and his three children travelled to Tre Fontane (Three Fountains) in Rome on the 12th April 1947, and rested on a hill that was covered in eucalyptus trees opposite the place where St Paul was martyred. Bruno was preparing an important speech whilst his children played ball.

It seemed like a day just like any other, but after a while Bruno could no longer hear the sound of his children playing ball. He searched for them and eventually found them on their knees before a grotto, praying and repeating, “Beautiful Lady, Beautiful Lady”. Bruno, was annoyed by their behaviour and tried to move them, only to find that they were like marble. In that very moment Bruno cried out, “God, save us”! After these words, Bruno also saw a beautiful woman holding the Holy Scriptures to her breast, wearing a white dress tied with a rose coloured belt, and was covered with a green mantle that flowed from her head to her feet. It was the “Beautiful Lady”.

Mary firstly reproached Bruno for his behaviour saying, “You persecute me. Enough now! Return to the Holy Fold on earth (the Catholic Church),” then she added, “The true Church of my Son was founded on three white loves: the Eucharist, the Immaculate Virgin Mary and the Holy Father!” In response to Bruno’s intentions to discredit Her, She said, “My body could not decay and did not decay I was taken to heaven by My Son and His Angels.” Following Mary’s words, Pope Pius XII proclaimed the Dogma of the Assumption in 1950.

If the Lord found a place for the good thief on the left side of Jesus, where would one expect to find Mary? She is in the very heart of the Trinity because with her ‘yes’ she became the greatest collaborator. In fact, She said to Bruno, “I am who I am in the Divine Trinity: I am the Daughter of the Father, the Mother of the Son and the Spouse of the Holy Spirit.” These words indicate Mary’s confidence with the Word of God, and therefore the Word made Flesh who is her Son, Divine Revelation and this relationship is exemplified expressly by Pope Benedict XVI who wrote: “how completely at home Mary is with the Word of God, with ease she moves in and out of it. She speaks and thinks with the Word of God. Here we see how her thoughts are attuned to the thoughts of God, how her will is one with the Will of God” ( Deus Caritas Est No 41).

We may say that the topicality of this Marian message is almost astounding. In a world in which pseudo religious movements are born that take beloved souls away from the Church of her Son, the Virgin Mary intervenes to call us, and to show us, that there is only one road to Salvation: Her Son and the Church that He instituted on Peter.

The Virgin of Revelation, the mother of He who revealed the road for Salvation, asks us to recite the Holy Rosary every day for the unity of Christians, the conversion of the incredulous and sinners. Mary teaches us how to “contemplate … the face of Christ.” (Blessed John Paul II, Encyclical Letter, Rosarium Virginis Maria) The reason that the Virgin Mary gives us this prayer again is because it teaches, has taught and will teach us humility, obedience and love and will defend us from all that tempts us to retreat from Christian moral values.

We conclude this reflection with the Virgin of Revelation’s invite to, “Call me Mother, because I am your Mother.”