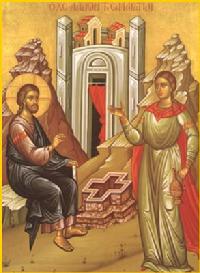 “If you knew the gift of God” is the phrase that Jesus said in the episode in which He met the Samaritan woman at the well of Sicar that is recorded in chapter 4 of St John’s Gospel from verses 1 to 10 (Jn 4:1-10). Let us try to understand Jesus’ words together, entering into this marvellous scene as if we were direct spectators.
Jesus came from Judea and was returning to Galilee and on the way, “He had to cross Samaria” (v 4). The Greek verb that John used, which we translate as ‘had’, expresses a necessary action that fits in to God’s Divine Plan. God the Father wanted His Son to pass through Samaria so that He would meet the Samaritan woman. Therefore, God always makes the first move towards man.

Jesus is tired and sits alone beside the well as His disciples had gone to buy food in the city.
Already in the Old Testament wells were considered important meeting places. Abraham’s servant met Rebecca, Isaac’s future spouse, at a well as is written in the 24th chapter of the book of Genesis (Gen 24:11-15)

[11] Near evening, at the time when women go out to draw water, he made the camels kneel by the well outside the city. [12]Then he prayed: “LORD, God of my master Abraham, let it turn out favourably for me today and thus deal graciously with my master Abraham. [13] While I stand here at the spring and the daughters of the townsmen are coming out to draw water, [14] if I say to a girl, ‘Please lower your jug, that I may drink,’ and she answers, ‘Take a drink, and let me give water to your camels, too,’ let her be the one whom you have decided upon for your servant Isaac. In this way I shall know that you have dealt graciously with my master.” [15] He had scarcely finished these words when Rebekah (who was born to Bethuel, son of Milcah, the wife of Abraham’s brother Nahor) came out with a jug on her shoulder.

Jacob met Rachael, his future spouse, at a well (Gen 29:1ss) and also Moses met his future spouse, Zipporah, at a well as recounted in the Book of Exodus (Ex 2:15).
Jesus awaits the arrival of the Samaritan woman and it is always He that makes the first step to meet us.
The Samaritan woman goes to the well at Sicar because she must get water for those daily necessities. She goes at an unusual hour, the sixth hour, which is equivalent to mid-day and is the hottest time of the day, in order to be sure that she would not meet anyone. Instead, the Lord is awaiting her arrival!

There the woman found the Lord who revealed who He truly was by saying to her, “for although you have had five, the one you are with now is not your husband. You spoke the truth there.” Then Jesus clearly revealed to her that He is the Messiah and so He revolutionised her life, converting her and giving a new sense to her entire life.

When we read this passage it is like finding ourselves at the well at Sicar because the Lord have called us to listen to Him. Like the Samaritan woman, we are also “thirsty” but the risk is that we, as the Prophet Jeremiah says, go to quench our thirst at the “leaky cisterns” (Jer 2:13). Instead, the Lord offers us “the living water that wells up to eternal life” (Jn 4:14). Only by drawing water from this fountain will we find the sense of our life and gain a profound knowledge of ourselves.
This is the true gift of God!