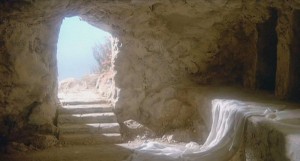 According to the Jewish week, ‘the first day’ is Sunday – the day that follows the Sabbath – the Holy day and a day of rest. For the Jews, the Sabbath represented the seventh day of the cosmic creation upon which the Lord rested (Gen 2:2) and which, according to the Decalogue, they were obliged to “keep Holy” (Ex 20:8). This is the day that, according to the Old Testament, was blessed by the Lord (Gen 2:3,Ex 20:11). However, in the New Testament, something extraordinary occurs because the Lord did not rise on the Sabbath, the Holy day, but on the ‘first day of the week’ – on the Sunday.

The early Fathers of the Church were all very quick to draw the link between the significance of this ‘first day of the week’ and the first day of the cosmic creation in Genesis by saying that Christ Rose, as the ‘first born’ of the ‘new creation’ (cf Col 1:15, 2 Cor 5:17) on the first day of the ‘new’ week. On this day, Christ overcame death, overthrew the sin of Adam to become the ‘first born from the dead’ (Col 1:18) and to inaugurate a new creation. Through our Baptism we are able to participate in this new creation in Christ as through Him we have died to sin and been restored to communion with God Our Father. According to the account in Genesis, it was on the first day that God created light (Gen 1:3) and “separated light from the darkness.” (Gen 1:4) Similarly, in the Gospel accounts, it was at “day break” (Lk 24:1) or “dawn” (Mt 28:1), when the darkness that covers the world gives way to light, that Christ rose from the dead. In the new creation, light is separated from darkness in Christ. Through His Passion, Christ, the light of the world, has overcome the darkness of death and the void caused by sin that separated man from God. On the ‘first day of the week’, a new redeeming light shines over the earth that will last forever!

From Apostolic times, Sunday, the first day of the week, has been celebrated as ‘the Lord’s Day’ – the Dies Domini. It was on a Sunday that the Apostles met the Lord after His Passion and death. This is the day that the Apostles first encountered the Risen Lord! The Holy day for the Jews was the Sabbath, it was the day that they renewed their relationship with God by refraining from work and praying in the synagogues. In the New Covenant, Sunday is the day that we have a meeting with the Risen Lord by participating in the celebration of the Eucharist. Therefore, just like the Apostles, we also encounter the Risen Lord on the ‘first day of the week’. In this way, every Sunday is a celebration of the Pascal Mysteries, every Sunday is Easter! Each Sunday we are called to act like Mary Magdalene and the Apostles to encounter the Risen One at Mass.

Finally, Sunday, the ‘first day of the week’ may also be interpreted as the eighth day if taken as a succession of days (the seven days of creation to the Sabbath plus one, the eighth day) and be a sign of Eternity. “Saint Basil explains that Sunday symbolizes that truly singular day which will follow the present time, the day without end which will know neither evening nor morning, the imperishable age which will never grow old; Sunday is the ceaseless foretelling of life without end which renews the hope of Christians and encourages them on their way.” (Blessed Pope John Paul II Dies Domini n 26). On the eighth day, Eternity is once again opened to man and so the eighth day symbolises the start of eternity that we await upon our death. Therefore, the ‘first day of the week’ is also an sign of Christian hope, the promise of Eternal life that Christ’s Resurrection brings to us. “Surrexit Christus spes mea” – Christ my hope is risen!

“With the Resurrection, the Lord’s day enters the nights of history. Beginning with the Resurrection, God’s light spreads throughout the world and throughout history. Day dawns. This light alone – Jesus Christ – is the true light, something more than the physical phenomenon of light. He is pure Light: God Himself, who causes a new creation to be born in the midst of the old, transforming chaos into cosmos.” (Pope Benedict XVI)