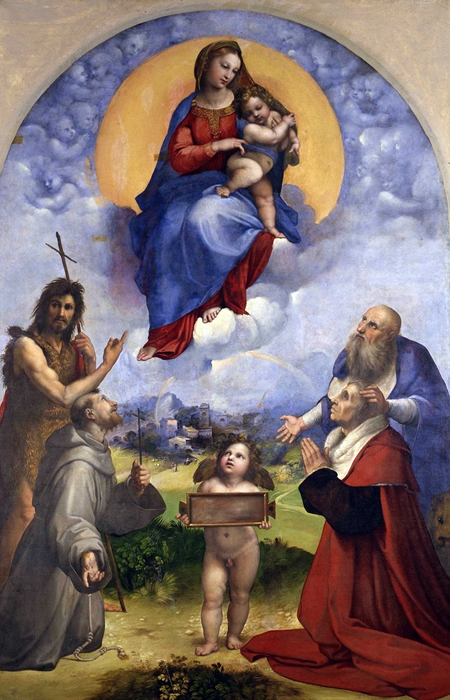 In 1511 Sigismondo de Conti, a humanist who was the secretary of Pope Julius II, commissioned Raphael to produce an altar piece for Santa Maria Aracoeli in the Campidoglio in Rome. In 1515, the altar piece was sent to Foligno to be placed in St Anne’s Monastery. In 1797 that same altar piece was taken to Paris by Napoleon and then to Trattato di Tolentino before being restored to Pope Pius VI who located it in the Vatican Pinacoteca or Picture Gallery.

In the upper part of the picture, sat on a throne of clouds is the Madonna with the Baby Jesus in her arms. Behind them, acting as a backrest, is the sun which is surrounded by the choirs of angels that appear like clouds!

An ancient Roman tradition says that on the day of our Lord’s Birth in Bethlehem, the Emperor Augustus, in the Arce of the Campidoglio where the Church Santa Maria in Aracoeoli is now located, had a vision of a woman in a throne with a baby who shone like the sun. The Tiburtina Sibyl had told the Emperor that that Child would be adored by all people as He is the first born Son of God. The Emperor, receiving this news, had an “Altar of Heaven” (in Italian Altar del Cielo – Aracoeli) made in the Campidoglio. Augustus’ vision of the woman before the sun with a babe in arms represented the first “news” of Jesus, Son of God in pagan Rome.

Who are the people present in the scene? The four people on the lower part of the scene are people who had a great devotion to the Mystery of Our Lord’s Incarnation.

On the left hand side is St John the Baptist with his look that reaches out to the spectators. He who prepared the way for Jesus and who, upon seeing Jesus pass by, identified Him as “the Lamb of God” (Jn 1:36)

In the first place, before St John the Baptist, we find St Francis of Assisi who looks towards the Virgin with Child and indicates them to the spectator. The Franciscan Order were the custodians of the Church Santa Maria Aracoeoli. In addition, we must not forget that St Francis was the inventor of the crib, the first one being created with “humans” in Greccio, Italy and in the place of the Baby Jesus they celebrated the Eucharist.

On the right side, we find St Jerome instantly recognisable by the lion at his side. The Saint was the secretary to Pope Damaso who gave him the responsibility of translating the Sacred Scriptures from Hebrew and Greek into Latin. St Jerome resided in Bethlehem where the Word Incarnate was born in a grotto. We also find Sigismondo de Conti in the scene confiding in St Jerome’s protection. In fact, just like the Saint he was also secretary to a Pope: Pope Julius II. With a look towards Mary he seems to say: Holy Mary, Mother of God, pray for us sinners now and at the hour of our death. Amen.

The Virgin Mary sits on her throne with her feet resting on the steps of clouds located before the throne. Her right foot is extended in the act of descending whilst her left foot is resting on the ascending stair. In this position, Mary joins heaven and earth. Behind the enormous sun are dense clouds that take the form of thousands of angels adoring the Christ child and his mother. The Baby Jesus seems to be fighting to be free of His Mother’s gaze to come to earth and make Himself present on the altar.

In the background there is a country scene with fields surrounding some housing settlements. The main home in the scene is surrounded by a flash of light that looks like a comet. It is thought to be Bethlehem where Christ was born.

In the centre of the piece is an angel looking towards the spectator holding a blank tablet that is for an inscription. It was left blank by Raphael because Sigismondo de Conti died before he could dedicate the inscription. It remains blank so that you can write you inscription of devotion to the Christ Child and His Blessed Mother!