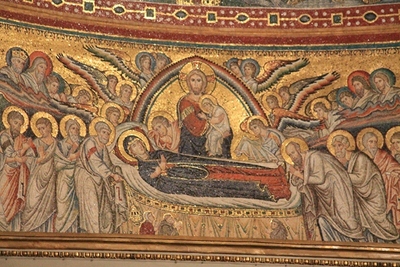 The splendid mosaics in the apse of St Mary Major’s Basilica in Rome narrate the life story of the Blessed Virgin Mary. Of particular interest is the “Dormitio Mariæ”, the Dormition of Mary, which is found just below the central mosaic. The mosaic depicts the Marian mystery that the Eastern Church refer to as the “Dormition of the Theotokos” or Our Lady’s passage from her life on earth to the glory she now enjoys – body and soul – in heaven.

The Franciscan artist, Jacopo Torriti, was the author of the Marian cycle in the apse. He received this commission from Pope Nicolas IV (1288-1292) who was the first Franciscan Pope and it was completed in 1296.

From the first centuries the Church has believed that Mary’s death was rather likegoing to sleep in the Lord.

The tradition states that Mary spent the ultimate years of her life in Ephesus (modern day Turkey). From the cross, Jesus entrusted His mother to St John who “from that moment…made a place for her in his house”(Jn19:27). The tradition continues that prior to Mary’s passage to heaven all the Apostles, who were dispersed in various parts of the world to announce the Gospel, were advised by an angel of her forthcoming departure and made plans to travel to be with Mary. They all remembered the terrible experience of the cross and how they abandoned the Lord and it was with Mary that they found the courage to stay united awaiting the descent of the Holy Spirit at Pentecost.

In the “Dormitio Mariæ” mosaic we find the twelve Apostles united around the body of the Mother of the Lord who is resting on a white bed decorated with precious stones, with a serene face and hands crossed over her breast. The red tunic and blue mantle indicates her regal dignity. At her head we can see St Peter with his white beard holding a thurible to give the last honour to the Mother of Our Lord by incensing her holy body. At the foot of the bed we can see St Paul characteristically with a bald head and bent in adoration of the Mother of God. On the second level, near the pillow on which Mary’s head rests, we can see St John, the Apostle, who is crying lowering his head tenderly towards the Virgin. 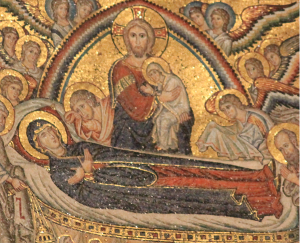 In the central position of the composition is the Risen Lord surrounded by the choirs of the angels. The whole scene is enclosed with a rainbow’s arc. Jesus is regally clothed wearing red and blue robes with a cruciform halo on His head. In His arms, He holds the Mary who is all in white as a symbol of her immaculate soul. Jesus holds Mary in His arms in the same way in which His mother held Him when He was a little defenceless child.

The culmination of the mosaic is the centrepiece where Christ the Redeemer crowns Mary. Both are sitting on the same nuptial throne. This glorious scene represents the eternal wedding feast between the Son of God and humanity redeemed by the sacrifice on the cross. 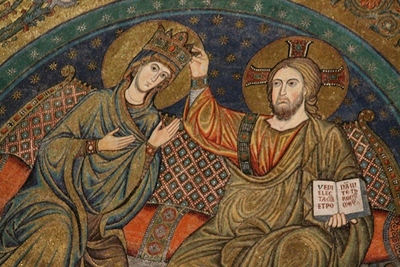 ers of the Song of Songs is written: “Come, my beloved and I will place you on my throne” (cfr. Song of Songs 4,7-8). Mary’s Assumption into heaven expresses and anticipates man’s own destiny that is to share in the divine life. This is possible because death
was overcome by Christ and with Mary’s Assumption to heaven she became first of human kind to share in the beatitude to which all humanity is called.

The Church rejoices at Mary’s Assumption because it is a guarantee and certainty for us that our bodies will one day too be called to Resurrection in Christ!