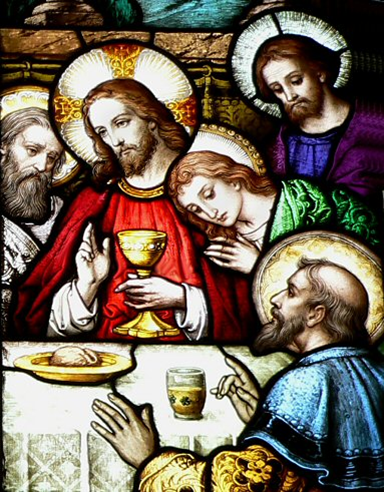 The oldest account of the institution of the Eucharist is contained in St Paul’s First letter to the Corinthians. This account is placed in the context of a reprimand for the Corinthian’s lack of charity towards the poor and needy. In their fraternal banquets that preceded the celebration of the Eucharist, that were a memorial of the historic circumstances in which the Eucharist was initiated or to provide for the needs of the community, there was a division between those who had nothing to eat and the rich who had food in plenty. St Paul called the Corinthians to understand that it wasn’t a just way to prepare to celebrate the Lord’s Supper and to receive His Body and Blood, the food of eternal life and source of charity. St Paul narrated what happened during the Lord’s Supper reminding the Corinthians of the reason to unite: “For I received from the Lord what I also handed on to you.” (v23)

The formula “receive – handed on”, or in other words, “to receive and to transmit”, comes from the traditional Rabbinic vocabulary expressing faithfulness and a gift received. Paul transmitted what he, himself, had firstly received and that “the Lord Jesus, on the night he was handed over, took bread, and, after he had given thanks, broke it and said, “This is my body that is for you. Do this in remembrance of me.” In the same way also the cup, after supper, saying, “This cup is the new covenant in my blood. Do this, as often as you drink it, in remembrance of me.” For as often as you eat this bread and drink the cup, you proclaim the death of the Lord until he comes.” (v23-26)

The formula of the consecration of the bread “this is my Body that is for you” (v24) clearly expresses the sacrificial, redemptive aspects of the Eucharistic rite and the Real Presence of the Lord in the Eucharistic species. With regard to the consecration of the chalice, St Paul uses a different formula to St Matthew (Mt 26:26) and St Mark (Mk14:22) saying, “This cup is the new covenant in my blood.” In this way St Paul highlights the New Alliance that Christ makes in His Blood substituting the Old Alliance formed in blood between God and Israel. St Paul adds, “Do this in memory of me” (v25:25). In this way, St Paul highlights that the Eucharistic rite is the memorial of the Last Supper as opposed to the sacrificing of the lamb offering in the Old Testament which was a memorial of the Jews liberation from slavery in Egypt.

In the Old Testament, the Pascal Lamb was only a symbolic and evocative reminder of the Jews liberation from Egypt, whilst the Eucharist realises and reproduces Christ’s sacrifice on the cross. It is a memory that is not only evocative but created from the act to which it refers. In the encyclical Ecclesia De Eucharistia, John Paul affirmed that in the Eucharistic celebration of Christ’s redemptive sacrifice “is made present ever anew, sacramentally perpetuated, in every community which offers it at the hands of the consecrated minister. […] The sacrifice of Christ and the sacrifice of the Eucharist are one single sacrifice… one, definitive redemptive sacrifice always present in time.” (n12) If this only indicated a symbolic presence, St Paul would not be able to say that: “Therefore whoever eats the bread or drinks the cup of the Lord unworthily will have to answer for the body and blood of the Lord.” (1 Cor 11:27)

As the Eucharistic rite is a true memorial, it is necessary that he who celebrates it is invested by Christ Himself with the special power of consecration. The words pronounced by Jesus at the Last Supper “Do this in memory of me” were directed to the Apostles who, in that precise moment, were ordained by Christ Himself as priests. It is, therefore, the ministerial priesthood that “acting in the person of Christ, brings about the Eucharistic Sacrifice and offers it to God in the name of all the people” (Ecclesia De Eucharistia, n 28). In persona of Christ means that the Priest, in the moment of consecration is identified sacramentally “with the eternal High Priest who is the author and principal subject of this sacrifice of his, a sacrifice in which, in truth, nobody can take his place. The ministry of priests who have received the sacrament of Holy Orders, in the economy of salvation chosen by Christ, makes clear that the Eucharist which they celebrate is a gift which radically transcends the power of the assembly and is in any event essential for validly linking the Eucharistic consecration to the sacrifice of the Cross and to the Last Supper”. (Ecclesia De Eucharistia, n 29). Therefore, the Eucharistic Mystery “cannot be celebrated in any community except by an ordained priest” (Ecclesia De Eucharistia, n 29).

Let us thank the Lord for the incommensurable gift of the Eucharist and we pray to Him to send Holy Priests to His Church that perpetuates the Eucharistic sacrifice through the centuries.