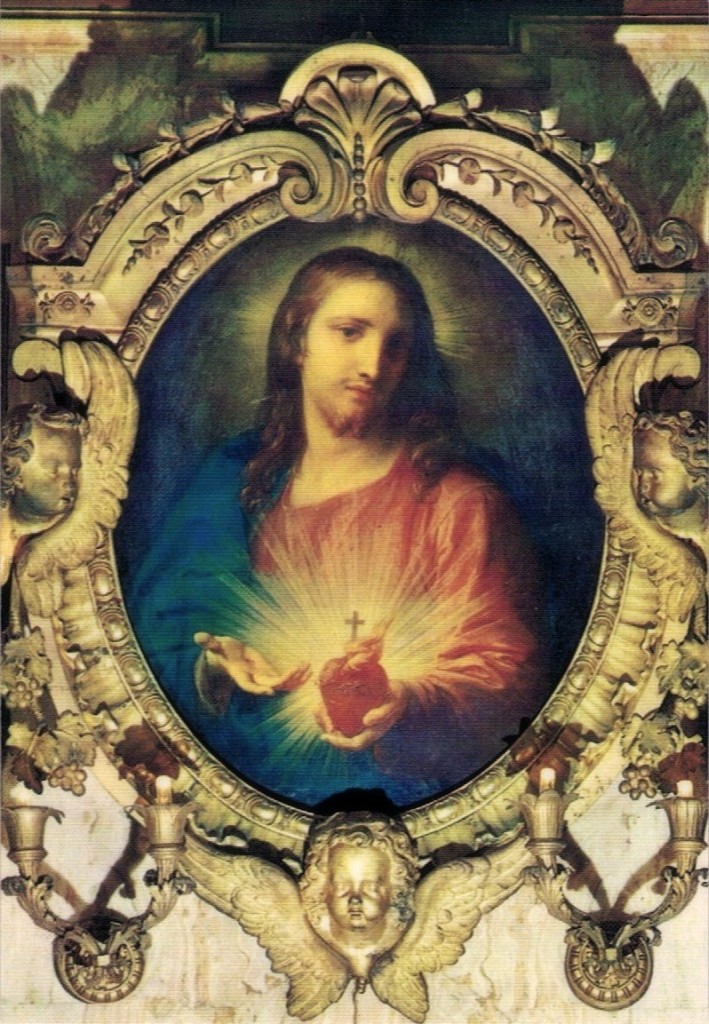 Pompeo Batoni (1708-1787) is the painter who depicted the most famous image of the Sacred Heart of Jesus. He was born in Lucca in 1708 and his father was a skilled goldsmith who imposed the family trade on his son. As a youth, Batoni displayed his ability in the engraving and decoration of precious metals however, at 19 years of age, he abandoned his father’s workshop in order to study the art of painting in Rome. Once in the Eternal City, the young painter became fascinated by the antique sculptures in and around the Vatican and the frescos by Raphael and Annibale Carracci. Batoni soon became famous due to his ability to copy the classical sculptures. Amongst Batoni’s works are some notable portraits that are notable for outlandish hairstyles and impassable compositions, but especially for the psychological penetration of the character and the delicacy of the complexion. Amongst his most well-known are portraits are Emperor Joseph II of Austria and Pope Pius VI.

The painting of the Sacred Heart of Jesus was inspired by the apparition of Jesus, under the title of the Sacred Heart, to St Margaret Mary Alacoque (1647-1690). In 1673 on the Feast of St. John the Evangelist Our Lord came to St. Margaret Mary, while she was in prayer before the Blessed Sacrament. The saint describes His Sacred Heart with the following words: “The Divine Heart was presented to me in a throne of flames, more resplendent than a sun, transparent as crystal, with this adorable wound. And it was surrounded with a crown of thorns, signifying the punctures made in it by our sins, and a cross above signifying that from the first instant of His Incarnation, […] the cross was implanted into it […].”

Batoni represented Christ dressed in a red tunic (which is the colour of blood, of martyrdom and humanity) and a blue mantle (the colour of heaven and of the divine). In the masterpiece, Jesus is young and beautiful with long hair falling down to his shoulders. Christ’s face has a short beard whilst his right hand indicates His inflamed heart which is crowned with thorns with a cross on top.

St Margaret’s account continues with the words that Jesus said to her, “My Divine Heart is so inflamed with love for men, and for thee in particular that, being unable any longer to contain within Itself the flames of Its burning charity, It needs to spread them abroad by thy means, and manifest itself to them (mankind) in order to enrich them with the precious treasures which I discover to thee, and with contain graces of sanctification and salvation necessary to withdraw them from the abyss of perdition. I have chosen thee as an abyss of unworthiness and ignorance for the accomplishment of this great design, in order that everything may be done by Me.” Jesus asked Margaret to place her head on His breast asking her to give Him the gift of her small heart to be placed in the furnace of His Divine Heart, before returning to her inflamed by His love.

The artists skill in painting was able to make Jesus’ gaze penetrate the observer of the piece and His right hand invites those who look upon the piece to place their head on Jesus’ breast, in the same manner as St John the Evangelist and St Margaret Mary. Upon Jesus’ request to give her heart to Him, the nun promptly donated it to be infested with God’s passion for humanity.

Looking at the image and reflecting on the fact that Jesus took St Margaret’s heart and emerged it in His before returning to her, raises question of who does the heart that Jesus is holding belong to? Is it Jesus’ Heart, or alternatively, that of St Margaret’s made it similar to His?

We may find the response in the prayer that the Church recites during the Month of June, which is dedicated to the Sacred Heart:

“Jesus meek and humble of heart make my heart like yours”