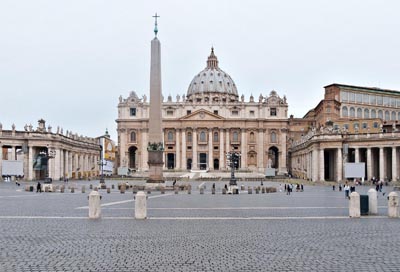 When pilgrims meet in St. Peter’s square they usually arrange to: “Meet under the obelisk!”. This great Egyptian monument is really a sundial which is delineated by the colonnade designed by Gianlorenzo Bernini from 1956 to 1667. The obelisk is a great monolithic monument which is made of red granite and stands more than 25 meters high! If the Obelisk could speak, it would tell us 3000 years of history, which started with the Pharaoh Nencoreo (maybe Amenemhet II, 1985-1929 B. C.) who erected it in Heipolis (Egypt) in honour of the Sun God as a thanksgiving for having recovered his sight.

The length of the Obelisk was reduced and it was transported by Cornelio Gallo, Egypt’s first prefect, to the Julian Forum of Alexandria. In 40 A. D the Emperor Caligula ordered the transfer of the obelisk to Rome and it was transported in a ship full of lentils to protect it during the journey. Once in Rome, the obelisk was positioned in the central “spine” of the circus that a few years later became known as “Nero’s Circus”.
On the night between the 18th and 19th July 64 A.D a great fire started in Rome that destroyed the city for nine consecutive days. In order to deflect attention away from himself, the Emperor Nero attributed the blame for the starting the fire to the Christians and so started 300 years of Christian persecution.

Tacitus wrote that if the obelisk could speak it would testify to “the great number of Christians that died” in Nero’s circus. The Christian executions were really brutal: “covered by feline skin, they perished by being torn by dogs, were crucified or burnt alive to serve as nocturnal illuminations”. This is how the first great persecution of the Christians by the Roman Empire started.
It was during these terrible persecutions that the Apostle, Peter, was crucified upside down. Certainly, the obelisk would have witnessed the recovery of St Peter’s martyred body by those early Christians who, with immense love, buried it in the bare earth near the Vatican Necropolis. 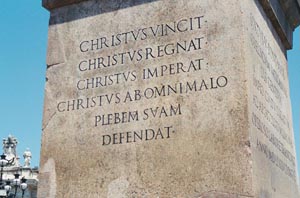 With the passage of time, the number of burials in the Necropolis grew. In the II Century a simple edifice known as the “Trophy of Gaius” was erected in order to preserve the location of St Peter’s tomb. In the base of the “Trophy of Gaius” is a manhole that corresponds exactly with the location of St Peter’s tomb. Within the shadow of the obelisk we can hear the words of the learned Roman Priest, Gaius, who, at the time of Pope Zefirino (199-217), wrote to the heretic Proclus defending the location of St Peter and St Paul’s tombs in Rome, saying: “And I can show the trophies of the Apostles. For if you choose to go to the Vatican or to the Ostian Road, you will find the trophies of those who founded this Church“.

Some years later, a perpendicular wall, which became known as the “Graffiti Wall”, was constructed on the north side of the Trophy of Gaius. It was on this very wall that the early Christians inscribed their invocations to St Peter, the Apostle. During the archaeological excavations authorised by Pope Pius XII in 1941, the Greek inscriptions were deciphered by epigraphist, Margherita Guarducci, who found the words “Petrus Eni”, Peter is here!
The obelisk could still tell us how the Emperor Constantine sought to protect St Peter’s tomb. In fact he buried the entire ancient Necropolis in order to make an artificial surface on the Vatican hillside upon which to construct the Basilica. St Peter’s tomb was the fulcrum around which the beautiful Constantinian Basilica was constructed. This Basilica remained in place, in its original form, right up to the end of the XV century.
On the 18th April 1506 the Pope Julius II blessed the first stone of the new St Peter’s basilica. It is this basilica that we all recognize today. It took over 150 years to build this beautiful Basilica!
In 1586 Pope Sixtus V commissioned the repositioning of the obelisk in the central location in St Peter’s square and also authorized that a fragment of Jesus’ Holy Cross be placed in a cross on its summit. The Latin inscription at the base of the obelisk reads: “Christus vincit, Christus regnat, Christus imperat!”, Christ conquers, Christ reigns, Christ rules!