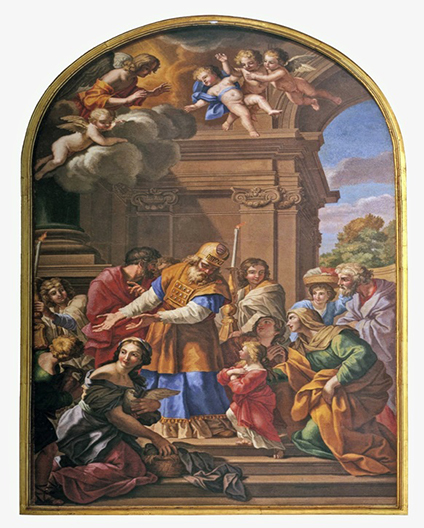 The 21st November is the World Day of Cloistered Life —Pro Orantibus Day (“For Those Who Pray”). It was instituted by Pope Pius XII in 1953 on the day in which we celebrate the liturgical feast of the presentation of Mary in the Temple.

To honour this special day, we visit the Chapel of the Presentation of the Virgin in St Peter’s Basilica, Rome and allow the magnificent altar piece to help us in our meditation for this feast. The altar piece is an imposing mosaic that depicts the Mother of God’s entrance into the Temple  which was realised in 1728 by Pietro Paolo Cristofari. The mosaic substitutes Francesco Romanelli’s original painting completed in 1638 that is conserved in the Basilica of St Mary of the Angels and Martyrs in Rome.

The presentation of the child Mary in the temple is recounted in the Protoevangelium of James, an apocryphal book. In the text, Mary, just three years of age, was brought to the Temple by her parents, Joachim and Anna, to be consecrated to God. She had to climb fifteen stairs to reach the altar of Holocausts where the High Priest was waiting for her. The 15 stairs leading to the altar corresponded to the gradual psalms that the People of Israel sung when they went to offer their sacrifices to the Lord.

The scene is set in the portico of the temple of Jerusalem and the staircase that leads to the altar is before a large, majestic column made of green marble. The portico has a large open arc through which you can see the background of an open sky and the wall of an enclosed garden. This garden is an allusion to the image that the Spouse uses for His bride in the Song of Songs. (Cfr. Song 4:12). The Fathers of the Church read the imagery of the enclosed garden as a reference to the perpetual Virginity of Mary which also forms part of the basis for the dogma of the Immaculate Conception. 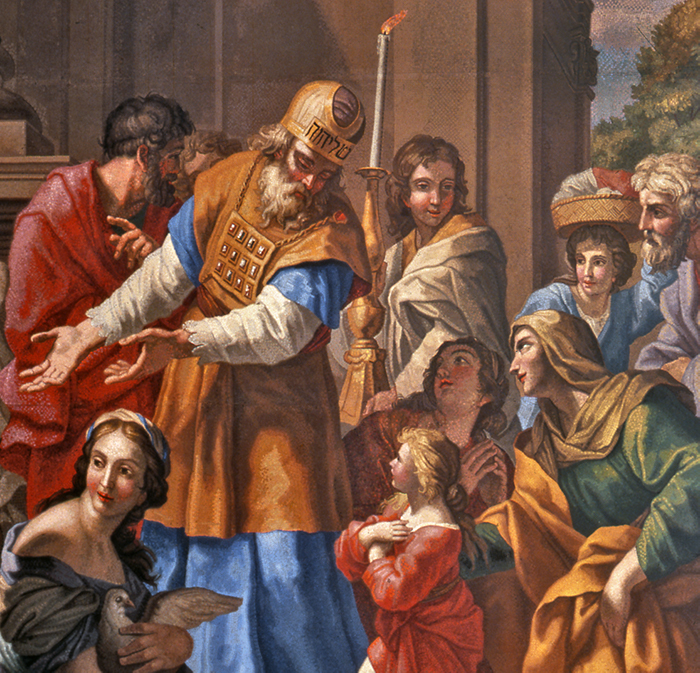 At the top of the column are clouds that are broken by a ray of light from which a group of angels emerge. This represents the Glory of the Lord, who makes His home in the Holy Temple. Mary is in the temple but, before long, she will become the true Temple of the Lord as the Angel announced at the Annunciation, “the power of the Most High will overshadow you” (Lk 1,35). A Seraph emerges from the clouds with luminous robes, who turns his gaze towards Mary and extends his hands as a sign of blessing. The graceful and plump angels are in flight, dancing happily and rejoicing to see the child, who, with her Divine Maternity, would soon become their Queen. An angel, adorned with a blue robe, is about to fall to earth which is an allusion to the heavenly Child who would descend to earth through Mary. His blue robes match the colour of the High Priest because He will become the true High Priest and Saviour of mankind.

In the foreground of the work, a procession accompanies the High Priest who wears his solemn Liturgical vestments. On his chest is a breastplate decorated with twelve gemstones which represent the 12 tribes of Israel. On each side there are two acolytes that carry the candelabras. The High Priest bows his head as a sign of reverence to Mary and makes a gesture for her to enter the sanctuary. Mary enters majestically with her hands joined and her gaze fixed as if to say, “I am the servant of the Lord…” (Lk 1:38)  She is dressed in red which is the colour of the wedding garments in the Imperial Court.

St Ann accompanies Mary with a watchful gaze and her arms open as she presents her daughter to the High Priest. Behind his wife, Joachim, observes his daughter and has a face that is filled with loving tenderness for his child. The two spouses are serene as they know that they are merely giving back to God that which already belongs to Him. Divine Mercy has woven the life of the Immaculate Mother of God by making St Anna’s sterile womb fertile.

On the left-hand side, a woman kneels looking outwards towards the observer of the masterpiece. She holds two doves which is the offering of the poor. It is the same offering that Mary and Joseph will make when they present Jesus in the Temple years later.

As such, it is the day that we also offer our prayers for the cloistered souls and the consecrated people throughout the entire world who serve the Church and humanity with their apostolate that overflows from their hearts which are full of contemplation and prayer. They teach us that the closer we are to God, the closer we are to mankind. We entrust them to the Most Holy Virgin Mary and, with unanimous hearts, we pray the prayer dedicated for this special Marian Feast:

Lord, as we honour the memory of the Blessed Virgin Mary, and seek her help, grant that we, like her, may share in the fullness of your grace. Through our Lord Jesus Christ, your Son, who lives and reigns with you in the unity of the Holy Spirit, one God, for ever and ever. Amen.