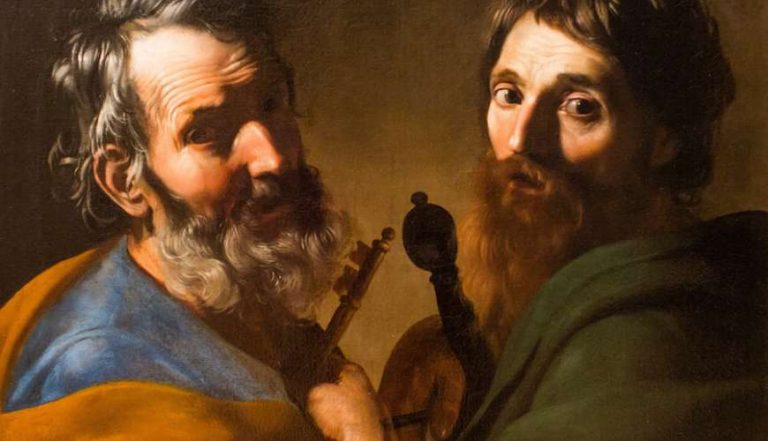 The 29th June is the day in which we celebrate the ancient feast of the martyrdom of Saints Peter and Paul, patrons of Rome. The importance of this Solemnity is shown by the fact that in the fourth century three Masses were celebrated on this feast: one at St Peter’s Basilica, the other at Saint Paul Outside the Walls and the third at the catacombs of St Sabastian where the bodies of the Saints were probably hidden during the barbaric invasions. With the Christianisation of Rome, the pagan feast that celebrated the mythical founders of the eternal city, Romulus and Remus, was substituted with the celebration of the feast of St Peter and Paul the two columns of the Universal Church. St Peter, the confessor of the Truth and St Paul, the Apostle to the gentiles, were called to witness to Christ with their death which crowned their apostolic mission.

For Simon, the fisherman, everything started on lake Galilee, the place where the Lord called him. He continued to follow the Master whose words made a deep impression in his heart causing him to declare, “You are the Christ, the Son of the living God” (Mt16:16). This profession of faith constituted the solid base for the Church. The ‘rock’ that, even despite denial and weaknesses, has remained stable over the centuries.

In his last years, Peter lived in Rome as Head of the Church. In 64 AD he was crucified upside down because he did not consider himself worthy to die like his Lord. Today, St Peter’s Basilica marks the place of his martyrdom and enshrines the saint’s tomb. 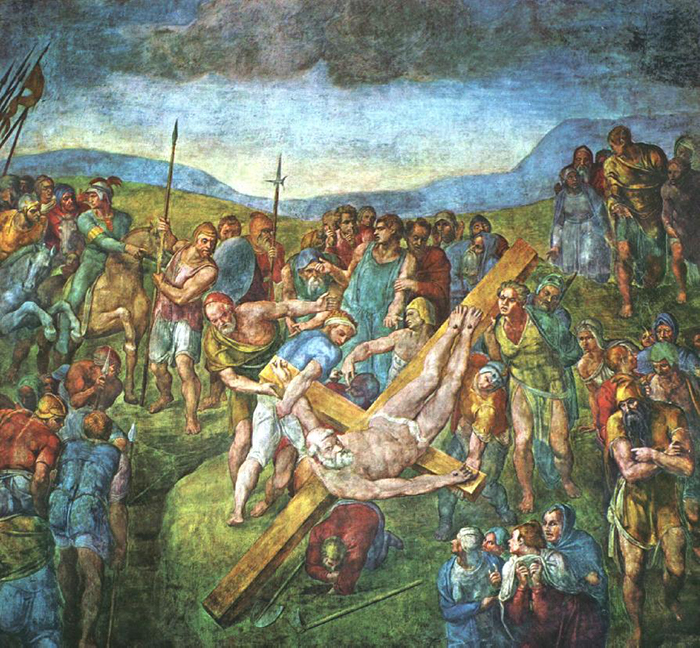 God the Father also had a great project for St Paul, the so-called persecutor of the Christians. In fact, this project was revealed by the words of Ananias, “The God of our ancestors has chosen you to know his will, to see the Upright One and hear his own voice speaking, because you are to be his witness before all humanity, testifying to what you have seen and heard.” (Acts 22:14-15) One could say that from that moment onwards Paul, the Apostle to the gentiles, was born. After making his appeal to Caesar to defend himself against the accusations of the Jews, he arrived in Rome following a difficult voyage. This situation allowed Paul to bring the Gospel “until the ends of the earth”. For St Paul, his arrival in Rome meant that he could reach the heart of the “gentiles”. He was martyred at Acque Salvie, where the present-day Basilica of the Tre Fountains is situated.

In Rome, the two Apostles made one Church that included the Jews and the Pagans and it was fortified by the testimony of their martyrdoms. Every Christian becomes a brother or sister in Christ without any distinction of race or place of origin. An icon of this fraternity is the subsequently entitled last embrace of the two Apostles before their respective martyrdoms whose memorial is preserved on the Ostiense Road in Rome. After this last gesture of esteem and fraternal love, the two saints, who had vastly different personalities but were united in their love of Christ, journeyed in the same direction: towards their Lord, leaving us with the most eloquent testimony of faith by their deaths.

On the 29th June the Pope gives the holy Pallium to the newly ordained Archbishops. It is a symbol of the dignity and responsibility that is conferred on them by the successor of Peter. Made in lambs wool, it is a reminder, for those who are called to wear it, of the Good Shepherd who asked Peter, “Do you love me? ….look after my sheep” (Jn 21:15-19) The shepherds that have, through the passing of the centuries, succeeded Peter are also called like the Apostles to bring souls to salvation through the proclamation of the Gospel.

May God grant the grace that, through the examples of its Patrons, the Church in Rome will always be the rock upon which Christ can be proclaimed to the whole world.