Love for the Immaculate Virgin Mary 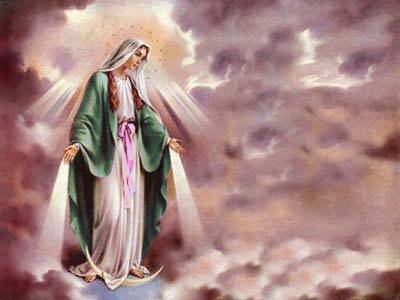 Mary is the Mother of the Church and our tender Mother who takes care of her children and doesn’t ever leave them alone. At the Grotto of Tre Fontane, Mary, appearing to Bruno, revealed to him that She was always close to him and never abandoned him. Even when he didn’t recognise her as his mother, she assured him that she never forgets her sons, ‘I will come to you and help you. I am always with you, you are never alone’. As Mary was at the foot of her Son’s Cross, she is also at the foot of our crosses and she accompanies us in our journey, taking us by the hand and bringing us to Jesus.

How do we respond to so much love and devotion?

Let’s give ourselves totally to her by following the example of Pope John Paul II who entrusted his entire life to Mary: ‘Totus tuus ego sum, Maria’ (I am all yours, O Mary). Let’s put ourselves in Mary’s school and learn from Her faith, humility, obedience, generosity, the spirit of sacrifice, hope, poverty, purity and love of Christ and the Church. Above all, by praying Mary’s preferred prayer which is the Holy Rosary, the strongest weapon against the evils of the infernal enemy.

The Church has always exhorted families to recite the Holy Rosary together because family prayer is the fountain of gifts for all the family and draws upon it God’s mercy. We must not let ourselves forget the expression that John Paul II used in his Apostolic Letter Rosarum Virginus Mariae ‘The family that prays together stays together’ (n 41)

To those who think that the Rosary is monotonous and boring, we respond with the words of St Jose Maria Escriva ‘Blessed be that monotony of Hail Mary’s which purifies the monotony of your sins!’ (The Furrow 475).

In 1854 Pope Pius IX, in his bull Ineffabilis Deus, proclaimed the dogma that defines the Virgin Mary as ‘immaculate’ which means that she was ‘conceived without original sin’. All the sons and daughters of Eve have contracted the original sin only Mary was immune.

The proclamation of the dogma was preceded by thousands of years of devotion to ‘Immaculate Mary’, such that it did not introduce a new idea but merely confirmed a long tradition. From the very origins of Christianity the faithful have always venerated Jesus mother as ‘all holy’. The Fathers of the Church in the East defined Mary as ‘a seed not poisoned a pure lily’. In the West the doctrine of the Immaculate found many obstacles. St Bernard, who was once called a lover of the Virgin, was afraid that by admitting Mary’s Immaculate Conception, Jesus’ Universal Redemption of humanity could no longer be considered ‘universal’. The Franciscan Giovanni Scoto, at the end of 1200 overcame this doctrinal hurdle affirming that Mary was also redeemed by Jesus but with an ‘anticipatory Redemption’ that occurred first and outside time. Mary was preserved from original sin in anticipation of the merits of her Son Jesus.

From 1476 the Feast of Mary’s Conception was introduced into the Roman Calendar. In 1830 the Virgin appeared to St Catherine Labore, who then circulated a ‘miraculous medal’ with an image of the Immaculate Virgin Mary.

In 1858, in Lourdes, St Bernadette Soubiros timidly asked the Virgin, who appeared to her, ‘Mademoiselle, would you be so kind as to tell me your name?’ The Virgin responded ‘I am the Immaculate Conception’. The Immaculate Virgin is the model of silent sanctity, the holiness of the little acts fulfilled every day with love that touches the hearts of those near. Let’s imitate her, putting ourselves in her school.

‘From among the descendants of Eve, God chose the Virgin Mary to be the mother of his Son. “Full of grace”, Mary is “the most excellent fruit of redemption” from the first instant of her conception, she was totally preserved from the stain of original sin and she remained pure from all personal sin throughout her life.’ (CCC 508)

Blessed be God the Father of our Lord Jesus Christ, who has blessed us with all the spiritual blessings of heaven in Christ. Thus he chose us in Christ before the world was made to be holy and faultless before him in love…(Eph 1:3-4)