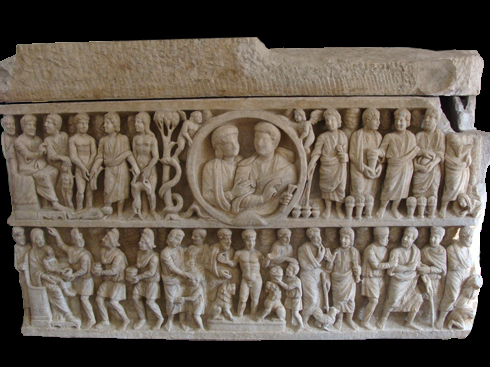 At the heart of the Pio Clementine collection in the Vatican Museums is the famous sarcophagus known as the ‘ dogmatic sarcophagus’ or simply the ‘dogmatico’. It is a masterpiece of early Christian sculpture from Rome dated to approx. 325-340 AD. Every part of the sculpted funeral monument in some way testifies to the Faith we proclaim.
Sculpted shortly after the first Ecumenical Council of the Church at Nicea (325AD), the sarcophagus testifies to the central dogma that emerged from the Council and was enshrined in the Nicene Constantinopolitan Creed: The Blessed Trinity – the revelation by Christ that God is One: Father, Son and Holy Spirit.

The first image on the Dogmatic Sarcophagus is one of the earliest, most important iconographic representations of the Blessed Trinity. The Blessed Trinity, ‘the oneness of God in whom there are three persons: Father, Son and Holy Spirit’ (Comp 48) is represented by 3 male figures with the same face to express that they are ‘of the same substance’. God the Father, the ‘Omnipotens Sempiterne Deus’ is sculpted sat on the throne with His right arm, which testifies to the power to create, on the Son through whom ‘all things were made’ (Col 1:16). The Son is in the act of creating Eve and the Holy Spirit is the figure standing behind the throne.

Artists for many generations used this same image of 3 identical male figures to denote the Dogma of the Divine Trinity which has its roots back to antiquity. 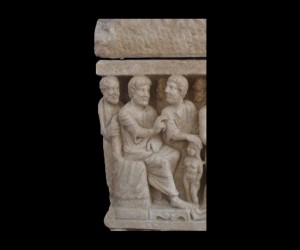 The ‘dogmatico’ was found in 1823 at St Paul’s Basilica when the original Basilica was destroyed by fire. In the destruction, in close proximity to St Paul’s tomb, the dogmatico was discovered almost intact. It is a silent witness to the faith sculpted in stone. The vicinity to St Paul’s tomb and the high quality of the monument suggests that it belonged to a person of importance. One hypothesis is that the sarcophagus belonged to one of the legates who represented Pope Sylvester I at the Council of Nicea.

Today, the Dogmatic Sarcophagus continues to hold an important message for Christians of the 3rd millennium. Ever wondered if the faith we proclaim today is the same as that of the early Christians? In this sarcophagus we have a carved testimony of the faith of those ancient times. We see that the early Christian community in Rome knew the outcome of the first Ecumenical Council at Nicea. However, most important is the proof that the ‘depositum fidei’ has been preserved through the centuries intact, unchanged! We believe what Christ Himself taught, what the Apostles witnessed, what the early Christians believed. It is written in the ancient stones!