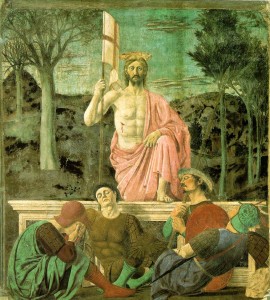 The Resurrection of Christ by Piero della Francesca (1416-1492) was described as “the greatest painting in the world” by the English author, Aldous Huxley. The beautiful fresco, that describes the moment of Christ’s Resurrection from the dead, was realised in the meeting hall of the Palazzo dei Conservatori of Sansepolcro, Tuscany, Italy between 1467-68. According to Vasari this fresco is the greatest of all Piero della Francesca’s works.

Christ emerges majestically stepping out of the tomb, placing the banner of the Resurrection, the iconographic symbol of His victory over death, on the earth below. This is the moment of Christ’s Resurrection from the dead. The onlooker is drawn to Christ as the central figure in the scene. Uncharacteristically for a scene of the Resurrection, Christ is dressed in rose coloured robe as a symbol of His sovereignty over the whole earth! His human, athletic body remind us of his two fold, human and Divine natures now explicitly present in His Resurrection. The colours of Christ’s body and robe stand out against the monochrome Tuscan landscape that lies as a setting to the piece as if to emphasise Christ’s central place in the scene.

In the foreground to the piece, we see Christ’s tomb that is set as a backdrop to the four guards who are depicted whilst sleeping at the tomb. This separation shows the difference between the heavenly and earthly spheres. The guard that is dressed in brown on Christ’s right (commonly believed to be the artists self-portrait) has his head resting against Christ’s banner. This act expresses the hope of the Resurrection that lives in all of us because “if Christ has not been raised, then our preaching is in vain and [our] faith is in vain.” (1 Cor 15:14)

Just as in the Gospel accounts of the Resurrection, the scene in the fresco is set at dawn that rises on the Tuscan landscape to frame the whole piece. Moving from the viewer’s left to right, the landscape changes from winter to spring as the trees change from the barrenness of winter to the vibrant green foliage of the springtime. This is used to depict the fact that Christ’s Resurrection signifies new life and that we become a “new creation” in Him (cfr.2 Cor 5:17).

Piero della Francesca was a mathematician and a geometer and so the graphical perspective of the piece provides a profound and astounding vision to the viewer. The fresco was positioned upon the Civic Hall wall such that that the guards are at eye level and Christ is viewed “sotto in su” or from below. Christ looks directly out towards the viewer and we have a full frontal view of Him. The perspective of the trees creates the effect that Christ seems to advance towards the viewer of the fresco. The Risen Lord enters the viewer’s space – the Risen Lord enters the viewer’s life bringing the hope of the Resurrection! Christ’s eyes look directly towards the viewer as if to look inside the soul. Are we to be like the guards and to stay asleep before the Risen Lord or, alternatively, do we keep our gaze towards Christ and embrace the hope of the Resurrection allowing His loving look to bring us healing and happiness as we remember that, [He is] “with us always, to the close of the age.” (Mt 28:20)

The historic setting to the fresco reveals an interesting mix of secular and religious incidents that have marked the frescos prominence. The Resurrection of Christ was commissioned for Sansepolcro, Civic Hall in Tuscany, Italy. The town’s name literally means Holy Sepulchre and it was founded in the 10th Century by Saints Arcano and Egidio who brought actual shavings from the Holy Sepulchre in Jerusalem back to the area and since that time the place has borne its name. It is said that before major Civic decisions the town’s officials prayed before the image to be led by the Lord in the decisions that they made. The image of Christ’s Resurrection formed part of the towns crest from this time.

It is also interesting to note that during the second World War the presence of the fresco has protected the area from destruction! During the war, advancing British Allied forces were given orders to bombard the town in the search for the retreating Nazi troops that may be hiding in the valley. However, Captain Clark, a British Army Officer, remembering that the fresco of the Resurrection resided in the town, ordered his men to stop the bombardment that would have seen the town and its artistic treasures destroyed. Eventually, the Allied troops discovered that the Germans had already retreated from the area and Sansepolcro and its famous masterpiece and the inhabitants of the town were saved.

Even a work of art can be a catalyst for miracles!