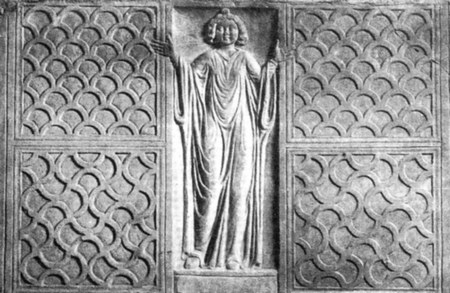 On the via Normentana in Rome, about 2 km from the centre, stands the Basilica of St Agnes which comprises of the ruins of the original Constantinian Basilica, the Mausoleum of Constance and the Basilica built by Pope Honorius I in the seventh century. The original Basilica stands many metres below street level. If you descend the 43 steps, that are divided into 8 tiers, one finds a marble slab on the left wall from the year 357 which forms part of the martyr’s tomb placed on this location by Pope Liberius I (352-366). In the centre of the slab the little martyr Agnes is represented in a praying gesture, wearing a dalmatic, which is a short tunic that is open at the sides and typically worn by the Romans. The unknown artist was able to draw a sensitive and spiritual portrait of the young martyr. In the portrait, her round face and chubby cheeks are illuminated by a slight serene smile and her head is crowned with bobbed hair and soft, wavy curls. Pope Damasus (366-384), who was a great lover of the martyrs, had some verses that tell the story of the martyr engraved on a marble slab. They translate as follows:

Oh Alma (Agnes), you are worthy of my veneration, oh holy decorum of modesty, most illustrious martyr, I pray that you will be propitious to the prayers of Damasus.

Saint Agnes died on the 21st January during the last persecution of the Christians by Diocletion sometime between the years 303 – 305AD.

The Tradition recounts that Agnes was a young Christian and at 12 years of age she wanted to live only for Jesus by serving the poor. The young Agnes found her strength in the Eucharist, that was celebrated secretly by the early Christians, at sunset in the “dormus ecclesiae” – the homes of nobles who allowed the Christians to meet for the ‘fractio panis’ – the breaking of the bread. This reflects what we read in the Acts of the Apostles: “They devoted themselves to the teaching of the apostles and to the communal life, to the breaking of the bread and to the prayers.” (Acts 2:42)

From an early age Agnes’ beauty was noted and she was asked to marry the son of the Prefect of the City of Rome. Upon her refusal of the invite to marriage, she was forced to offer incense to the gods. She was taken to the Temple of the goddess Vesta and exposed in her nudity. However, the young girl totally hid herself under her long hair. No-one was able to violate her and so they placed her head on a stone rock and the executioner slew her as one kills a lamb at the slaughter. Her parents gathered her body and it was buried in the little farm on the via Normentana.

Her foster sister, Emerenziana, prayed and cried at the tomb of Agnes and a cruel group of pagans discovered her and, after mocking her, stoned her to death too!

Still today, the bodies of Agnes and Emerenziana rest in peace in a splendid silver urn that was donated by Pope Paul V Borghese (1605-1621) below the main altar in St Agnes Basilica on the via Normentana. 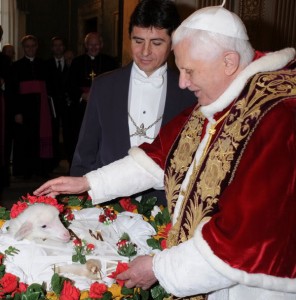 Each year on the 21st January, on the same altar at St Agnes’ Basilica two lambs are blessed that will be woven by the Benedictine nuns of Santa Cecilia in Trastevere to make the sacred pallium.

The pallium is a white woollen stole with 5 red crosses which symbolises the sweet yoke of Christ. He is the Good Shepherd who takes the lost sheep upon His shoulders. The ends of the pallium are black to symbolise that the hooves of a sheep and therefore the fact that Bishop must lead the flock. The pallium is imposed upon the new Metropolitan Archbishops by the Holy Father during the feast of Saints Peter and Paul to remind them of their special communion with the Apostolic See.

This is the Tradition of the Church.