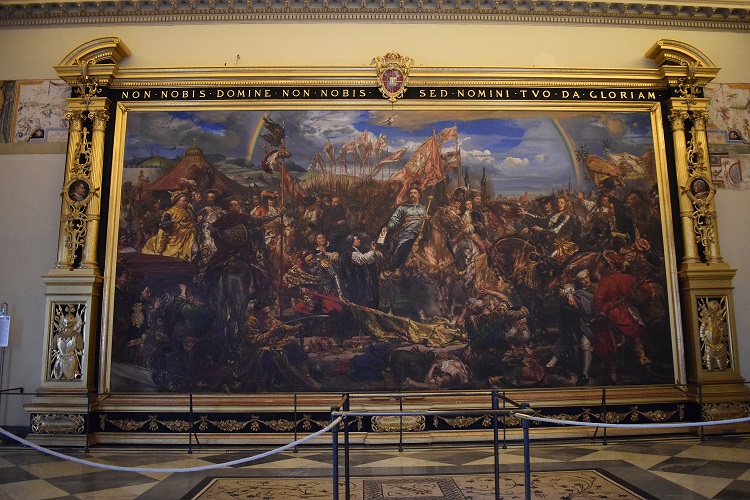 The Battle of Vienna is a huge, imposing oil canvass that stands 9m by 4.5m in the John Sobieski room of the Vatican Museums. The masterpiece recounts the ending of the Turkish siege of Vienna by the Catholic army led by the Polish King, John Sobieski, on the 11th September 1683.

The polish painter, Jan Matejko, illustrated the victory as a celebration of the 200th anniversary of the liberation of Vienna and on this occasion, the painting was donated to Pope Leo XIII in 1883.

In the centre of the canvass the Polish king, John Sobieski, advances majestically on horseback accompanied by his son, Prince James, on his left hand side. The king is radiant, attired in the blue and gold of the polish regal dress of the day. The Sovereign is handing the letter announcing the liberation of Vienna to the Papal emissary. In his right hand he holds the golden sceptre that is the emblem of his authority. The rest of the nobles and heads of the Christian League emerge to the right of the king lead by Duke Charles of Lorena who removes his cap as a sign of homage and respect for the Polish king.

Behind Sobieski, Blessed Marco d’Aviano, the Capuchin monk can be seen carrying the icon of Our Lady of Loreto. He was nominated as Chaplin to the Christian army headed for Vienna by Pope Innocent XI. D’Aviano encouraged the army and the people of Vienna to resist the Turks by the recitation of the Holy Rosary. During the two-month siege of Vienna he negotiated the agreement of all the European princes to defend the city. Thanks to this Capuchin monk all the princes of Europe ceded control of their own armies and allowed them to be led by the Polish king.

In the left hand foreground, are the lavish tents of the Turkish camp that have been invaded by the conquering army. In the front of the piece you can see Turkish soldiers relinquishing their sabres as a sign of surrender. The piece captures all the drama of a victory march. On the left of the king, a knight on horseback raises the regal standard whilst another soldier, dressed in a leopard cloak, lowers the green and gold standard of the Prophet Mohamed. This standard was a gift to the Grand Vizier, Kara Mustafa from Sultan Mohamed IV because he wanted it to be raised on the top of St Peter’s Basilica, Rome. In fact, the objective of the Turkish army was not only the conquest of Western Europe but also to march to Rome to reduce the Basilica to dust.

Kara Mustafa was proud of his 300,000 strong army whilst the Christian League had only 70,000 troops. Reliant on his strong army, the Grand Vizier did not consider the possibility of a Christian attack from mount Kahlenberg, that overlooks the city of Vienna. In the background of the picture, mount Kahlenberg can be seen behind the Turkish encampment. Sobieski attacked from this mountain advancing with the cavalry comprising of “winged hussars” whose battle cry of “Jesus and Mary” warned the Turkish troops of their attack. In the masterpiece, the knights are featured carrying the Polish standard with the White Eagle on a red flag. In the horizon of the masterpiece, the city of Vienna, the rainbow that crosses the skyline and a white dove in free flight over the army can be seen.

The day after the victory, the king and his court attended the celebration of the Holy Mass at the Church of Our Lady of Loreto where the King himself intonated the “Te Deum”, the Hymn of Thanksgiving, followed by Psalm 115: “Non nobis, Domine, non nobis!” (“Not to us, Lord, not to us”) The priests replied, crying, “Sed nomini tuo da gloriam” (“But to your name be the glory”). These words are inscribed on the frame of the masterpiece to underline the fact that God, through the intercession of the Virgin Mary, saved Christian Europe from Ottoman invasion.

In memory of this great victory Pope Innocent XI instituted the feast of the Holy Name of Mary which is celebrated annually on the 12th September.