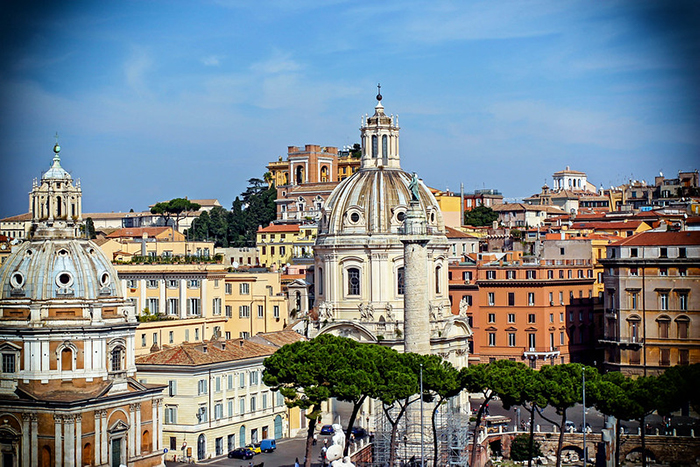 In this month of September, we celebrate the memorial of the Most Holy Name of Mary and, in the city of Rome, there is a magnificent Church dedicated to her name in the Trajan Forum.

In 1683, the news of the siege of Vienna arrived in Rome and this brought with it the expectation that Rome was the ultimate objective of the aggressors. In response, the Pope declared an extraordinary Jubilee to implore God to save the City and Vienna from this aggression. Numerous penitential processions and Eucharistic adoration were organised in the German national Churches to continue the prayers and penances in support of the city. Between the 11th and 12th September the European army, which was much smaller than the Turkish forces, came to liberate Vienna. Meanwhile, inside the city walls, the elderly, women and children recited the Rosary to pray for liberation from the enemy. Through the intercession of the Virgin Mary the Holy League obtained the grace of victory over the huge Ottoman army. Pope Innocent XI proclaimed the feast of the Holy Name of Mary to thank the Blessed Mother for this victory.

The growth of the Confraternity meant that its base in the Church Santo Stefano del Cacco was too small and so, towards the end of the 17th Century, the Confraternity was granted the almost abandoned Church of St Bernard at the Trajan Forum. The restoration of the Church started immediately but the results were disappointing and therefore the Confraternity entrusted the construction of a new Church to Derizet in 1735. 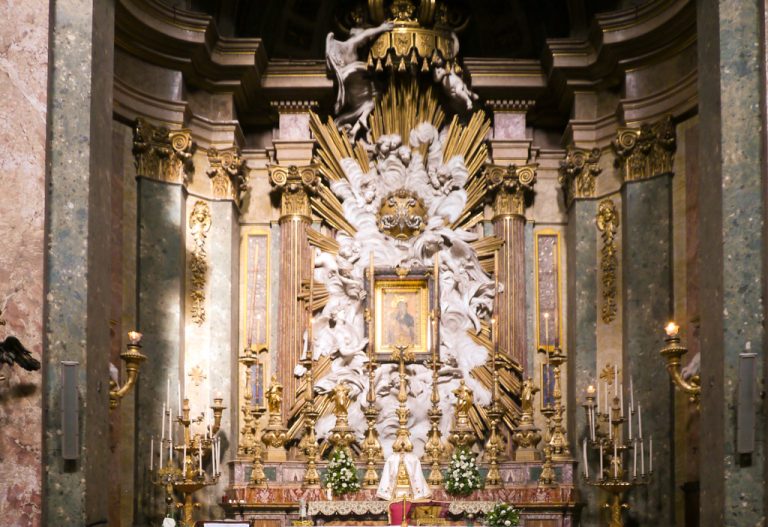 When one enters this beautiful elliptical shaped church, you are surrounded by the elegance of this sacred space. The six side chapels make a beautiful crown around the main altar, which was designed by Mauro Fontana. The altar has a precious wooden icon of the Virgin Mary, thought to be by the Roman School from the thirteenth century. This icon was originally found in the Lateran Sancta Sanctorum and was given to the ancient Church of St Bernard by Pope Eugene IV in the fifteenth century. The icon is surrounded by beautiful marble angels that bear honour to the Virgin Mary. Above the image, surrounded by twelve stars, is the beautiful monogram of Mary as a means of giving honour to her Holy Name. At the end of the decoration, two angels support an awesome golden crown that completes the lavish main altar.

One of the most beautiful features of the Church is the decoration of the dome. Eight decorative ribs present eight medals that narrate the most important scenes in Mary’s life. The dome culminates
in a roof lantern where there is a triangle surrounded by glory which is an allusion to the Most Holy Trinity. Mary has a special relationship with the One, Triune God: she is the daughter of the Father, the mother of the Son and the spouse of the Holy Spirit.

The monogram of Mary appears in various places in the church and the sacristy to remind everyone that the Church is dedicated to the Most Holy Name of Mary and the special graces that she was granted. To emphasise the importance of this church a plenary indulgence pro vivis et defunctis, for the living and the dead, has been granted to those who visit this sacred place.

Let us entrust ourselves to the Blessed Virgin Mary. Ask her to defend us and may her powerful and beautiful name help and sustain us in life and at the hour of our death.