The Immaculate Conception and the Column in the Piazza di Spagna, Rome 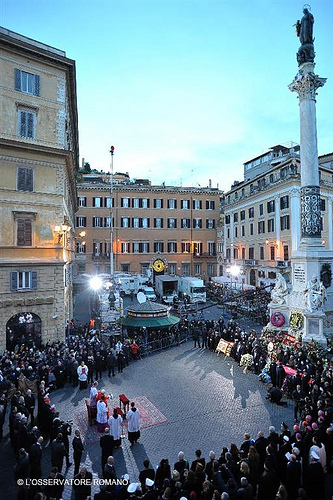 The column of the Immaculate Conception is situated next to the Piazza di Spagna in the adjacent Piazza Mignanelli in front of the Spanish Embassy in Rome near the Palace of the Propagation of the Faith. It was realised by the architect Luigi Poletti and inaugurated in 1857 on the 8th December thanks to the work of 220 firemen.

The work is dedicated to the dogma of the Immaculate Conception that was proclaimed by Pope Pius IX, in 1854, with the Apostolic Constitution Ineffabilis Deus. This dogma states that Mary is the only human being who was born without original sin. God, foreseeing man’s fall, “from the very beginning, and before time began, the eternal Father chose and prepared for his only-begotten Son a Mother in whom the Son of God would become incarnate and from whom, in the blessed fullness of time, he would be born into this world. Above all creatures did God so loved her that truly in her was the Father well pleased with singular delight. Therefore, far above all the angels and all the saints so wondrously did God endow her with the abundance of all heavenly gifts poured from the treasury of his divinity that this mother, ever absolutely free of all stain of sin, all fair and perfect, would possess that fullness of holy innocence and sanctity than which, under God, one cannot even imagine anything greater, and which, outside of God, no mind can succeed in comprehending fully.” (Pope Pius IX, Ineffabilis Deus)

The column of the Immaculate Conception is of Roman origin and was found in the excavations in 1778 in Campo Marzio. The structure is composed of a marble base upon which the 12 metre cipollino marble column that sustains the bronze statue of the Virgin Mary rests. The statue is the work of Giuseppi Obici. On the base of the column are 4 bronze statues of Moses, David, the prophet Ezekiel and Isaiah. Below each state is a verse from the Sacred Scriptures that refers to the dogma of the Immaculate Conception.

Below the statue of Moses we can read the verse from Genesis that states: “I will put enmity between you and the woman” (Gen 3:15) As we read in Ineffabilis Deus, the Fathers and ecclesial writers taught that with this divine prophecy “the merciful Redeemer of mankind, Jesus Christ, the only begotten Son of God, was clearly foretold: That his most Blessed Mother, the Virgin Mary, was prophetically indicated; and, at the same time, the very enmity of both against the evil one was significantly expressed. Hence, just as Christ, the Mediator between God and man, assumed human nature, blotted the handwriting of the decree that stood against us, and fastened it triumphantly to the cross, so the most holy Virgin, united with him by a most intimate and indissoluble bond, was, with him and through him, eternally at enmity with the evil serpent, and most completely triumphed over him, and thus crushed his head with her immaculate foot.”

Below the statue of David, from divine inspiration contained in numerous psalm, is the verse from Ps 45:5 “…the Holy Place where the Most High dwells.” Which refers to the fact that God preserved the Virgin Mary from original sin in view of the Incarnation of her Son through her. In this way, God sanctified her who would be a worthy dwelling for His Son. Mary became the living resting place of God. In her the Lord dwelt, in her the Lord found His place of rest.

Below the statue of Ezekiel the verse, “This gate is to remain closed.” (Ez 44:2) As the Fathers of the Church have affirmed this verse also refers to Mary’s Immaculate conception. In this verse they found: “that the exalted dignity of the Mother of God, her spotless innocence and her sanctity unstained by any fault.”

Finally, below the statue of Isaiah we find the verse: “Therefore the Lord himself will give you this sign: the virgin shall be with child, and bear a son, and shall name him Immanuel.” (Is 7:14) The Fathers of the Church have also read in this verse the reference to the Virgin Mary and her Virgin birth. Jesus was born of Mary and remained ever Virgin before, during and after the birth as she was not touched by original sin. 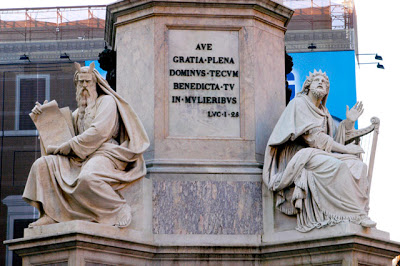 On the base is also 4 bass reliefs that represent the Annunciation, St Joseph’s dream, the Coronation of Mary in
heaven and the definition of the dogma of the Immaculate Conception. How well the words of the Apostolic Constitution Ineffabilis Deus, with which Pope Pius IX proclaimed the truth of the Immaculate Conception, transmit this aspect of the faith: “by the authority of Jesus Christ our Lord, of the Blessed Apostles Peter and Paul, and by our own: “We declare, pronounce, and define that the doctrine which holds that the most Blessed Virgin Mary, in the first instance of her conception, by a singular grace and privilege granted by Almighty God, in view of the merits of Jesus Christ, the Saviour of the human race, was preserved free from all stain of original sin, is a doctrine revealed by God and therefore to be believed firmly and constantly by all the faithful.”

Each year, on the 8th December the Church celebrates the solemnity of the Immaculate Conception and in the afternoon the Holy Father visits the Piazza di Spagna to place roses as an act of homage to Our Lady, at the statue of the Virgin. These roses indicate the love and devotion of the Pope, the Church and the people of the city of Rome for the Virgin Mary. With these roses they want to depose themselves of their anxiety and place their hope at the foot of the celestial Mother of the Redeemer.