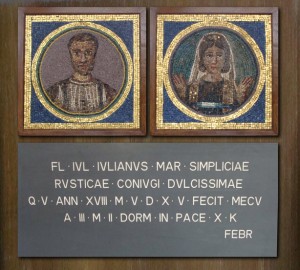 The mosaic portraits of two young spouses, Simplicia Rustica and Flavio Giulio Giuliano originates from the Ciriaca cemetery, otherwise known as the Monumental Cemetery of Verano, near St Lawrence Outside the Walls in Rome. These two mosaics, which are conserved in the Pio Christian Museum in the Vatican Museums, Rome, date to 350 A.D. The young wife is in the act of praying and the ancient inscription that accompanied the portrait which was lost read: “Flavio Giulio and Giuliano Simplicia Rustica, his sweet wife, who lived 18 years, 5 months and 15 days. She was my spouse for 3 years and 2 months. Sleep in peace. She was buried 23rd January.”

How can death be considered sleeping in peace? This was mere folly for the Pagans who had many gods and yet lived without hope because they were unsurpassable, closed in their eternal beatitude where there was no place for mortal men. With the inscription on their tomb, these two Christian spouses, testify that their death was a peaceful sleep because they had met a personal God to whom one can pray, a God who you can know in life and in death. This personal God is Jesus Christ, the Son of God made man who, on the cross, overcame death.

The Pagan culture believed that life was dominated by dark, irrational forces and people lived as slaves of the devil, superstitions and magic. Amongst noble Celts, esoteric cults were defused that believed Salvation was just for a few specially chosen people.

The Pagan culture believed that death was a catastrophe. However, for the Christians, that day becomes the “dies natalis” the day we are born into heaven. The Christian hope of the Resurrection from the dead determined the name of their graveyards or necropolis. Christians, no longer called their graveyards necropolis – which means the city of the dead – but cemeteries which is derived from the Greek word “koimētḗrion” which means a sleeping place or a place of rest. It is a temporary place where the faithful departed await to be awakened by Christ.

“We see as a distinguishing mark of Christians the fact that they have a future: it is not that they know the details of what awaits them, but they know in general terms that their life will not end in emptiness. Only when the future is certain as a positive reality does it become possible to live the present as well. [….]. The dark door of time, of the future, has been thrown open. The one who has hope lives differently; the one who hopes has been granted the gift of a new life. (Pope Benedict XVI Encyclical Letter, Spe Salvi, n. 2)

During the month of November, let us remember our deceased family and friends knowing that our prayers and offerings for them will have great merit before the Lord.

“The souls of the departed can, however, receive “solace and refreshment” through the Eucharist, prayer and almsgiving. The belief that love can reach into the afterlife, that reciprocal giving and receiving is possible, in which our affection for one another continues beyond the limits of death – this has been a fundamental conviction of Christianity throughout the ages and it remains a source of comfort today. Who would not feel the need to convey to their departed loved ones a sign of kindness, a gesture of gratitude or even a request for pardon?”