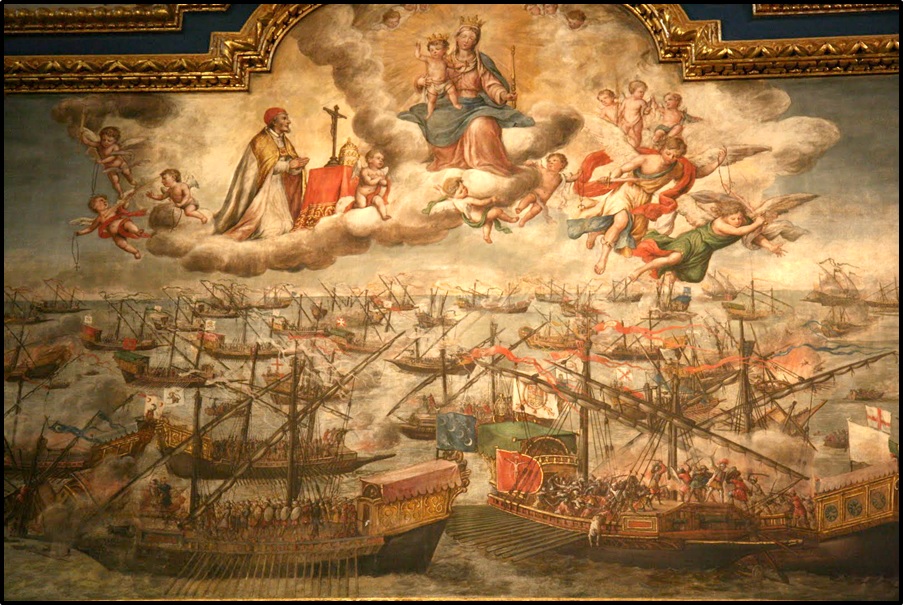 Before the departure of the Christian fleet for Lepanto, Pope Pius V blessed and consigned the Christian standard to the commander of the Christian Holy League, Don John of Austria. The standard was decorated with a crucifix placed between St Peter and St Paul on a red background with the Constantinian motto “In hoc signo vinces” – under this sign you will be victorious. This standard flew on the fleets flagship along with the image of Our Lady under the title “Sancta Maria, succurre miseris” – Holy Mary, help of the helpless.

Prior to the start of the battle, the Christian soldiers were aware that they may be called to give their lives in defence of Christ, His Church and their homeland and so they united to pray the Holy Rosary. Don John gave every man on board a Holy Rosary including the prisoners who were kept in the galley with the task of rowing the ship’s oars.

On the Sunday of the 7th October 1571, the confraternity of the Rosary prayed in every Church in Christendom for the victory over the Turkish fleet.

Despite being greatly outnumbered by the Ottoman fleet, Don John’s force implored heavenly assistance by kneeling in prayer on the deck of their ships before the commencement of the battle. After four hours of conflict, the Christian fleet prevailed. Of the 300 naval vessels in the Turkish fleet, only 40 escaped capture or destruction. At the final count, 40,000 Turks were dead and Europe was once again saved from Ottoman invasion.

At the same time, Pope Pius V, in a meeting with the cardinals, unexpectedly went to the window and looking towards the east exclaimed “Let us set aside business and fall on our knees in thanksgiving to God for He has given our fleet a great victory.” The news of the victory of Lepanto only arrived in Rome on 23 October.

Pope Pius V declared the 7 October each year as a feast in honour of Our Lady of Victories. Pope Gregory XIII changed the name of the feast to Our Lady of the Rosary. The awareness of Our Lady’s intercession in Lepanto was so great that in the Palace of the Doges, Venice, a painting of the battle was commissioned entitled with the words, “Not our power and arms, nor our leaders, but the Madonna of the Rosary helped us to victory.” The feast of Our Lady of the Rosary was extended to the universal Church in 1716 and definitively established on 7 October each year by Pope Pius X in 1913.