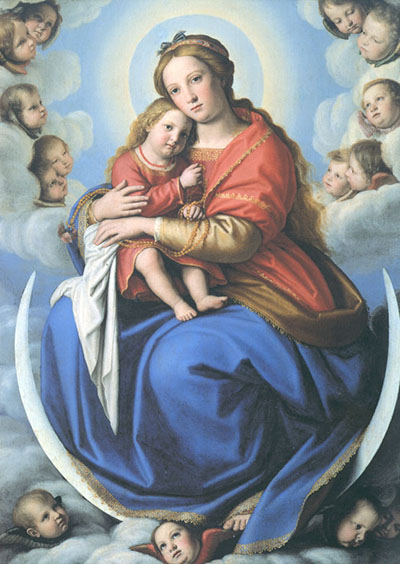 Giovan Battista Salvi, otherwise known as Sassoferrato (1609-1685), is an artist of the 17th Century whose career was distinguished by the painting of great portraits and devotional images particularly of the Virgin Mary. Indeed, he is often referred to affectionately as the “painter of the Madonna’s”. His natural style, that depicted his subjects with a sweet, almost enchanting expressions, the way he made use of exuberant colours and his particular attention to detail lent itself easily to the depiction of evocative religious works.

Amongst the most popular themes for his works is the image of the Madonna with Child and throughout his career he realised literally hundreds of these works. One of the most famous masterpieces he created is the Madonna with Child that he realised around 1650 and has formed part of the Popes collection since 1857. From the beautiful particular details of the piece, this work could easily have been entitled Our Lady of the Rosary! The painting was a gift to Pope Pius IX from Queen Isabella II of Spain in commemoration of the proclamation of the dogma of the Immaculate Conception. This image was also considered to be a favourite of Saint John Paul II who often prayed the Holy Rosary with pilgrims before this image on the first Saturday of each month.

Taking a closer look at the image we can start to appreciate its rich iconography. In the centre of the scene is Our Lady with the Christ child on her knee. Both of them look towards the viewer of the masterpiece with an inviting look. They are surrounded by the angels who form and adoring line that encircles the Madonna with Child..

The Child Jesus sits on his mother’s lap he is dressed in a red tunic that is the same colour as that of His mother. This concordance is a symbol of the fact that our Lady would also share in Her Son’s passion. Indeed, it evokes the words of Simeon: “and you yourself a sword will pierce” (Lk 2:35). Looking closely at the Child we can see that He holds a Rosary that finishes with a rose and he wears a distinctive coral coloured necklace that is an ancient sign of protection from danger. He holds the rosary beads in His hands as if He too is praying the Rosary! In this way the esteem the Lord has for the prayer is visualised as it seems that through this prayer He is communicating with His mother.

The figure of Our Lady is also rich in significance. We see Our Lady enthroned with the crescent moon at her feet which symbolises her Immaculate Conception. The crescent moon, which represents the lunar phases that are used to measure time, depicts that fact that Our Lady was chosen “outside time” or in the “fullness of time” (Gal4:7) to be the Mother of God and so was conceived without original sin. In addition, she brought into the world the Lord who stepped into human history from eternity and therefore from outside time. The moon at Our Lady’s feet and the fact that behind her we can see that she appears brighter than the sun are a reference to the Book of Revelation where it is written: “A great sign appeared in the sky, a woman clothed with the sun, with the moon under her feet..” (Rev 12:1-2) Our Lady is dressed in red that represents the passion and also love and the blue that speaks of heaven and her regal status as Queen of heaven. Therefore, in this image we are presented with representation that recognises Our Lady as the Woman of the Sacred Scriptures and also the fact that she is closely bound to her Son’s redemptive mission. By the same token, this image of Our Lady as the Mother of the Child that shows their profound intimacy demonstrates how her Son is ready to listen to her intersession for us through the miraculous prayer of the Holy Rosary. 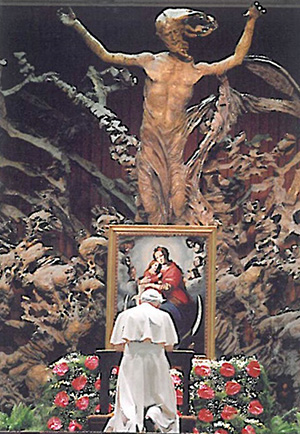 During the time of the Post Reformation these images where particularly important in the teaching of Catholic Doctrine and so quite naturally there was a great demand for such works. Even in our own age this image, that was so favoured by Saint Pope John Paul II, helps us to comprehend what he wrote in his Apostolic Letter, Rosarium Virginis Mariae “The Rosary, though clearly Marian in character, is at heart a Christocentric prayer. In the sobriety of its elements, it has all the depth of the Gospel message in its entirety, of which it can be said to be a compendium. … With the Rosary, Christian people sit at the school of Mary and are led to contemplate the beauty on the face of Christ and to experience the depths of his love. Through the Rosary the faithful receive abundant grace, as though from the very hands of the Mother of the Redeemer.” (Rosarium Virginis Mariae, n1) In this month of May, that is dedicated to Our Lady and a more intense recitation of the Holy Rosary, let us too learn how the contemplate the face of Her Son, imploring Him through her for the graces that we need.

Our Lady, Mother of God and Queen of the Holy Rosary, present our petitions to your Son!