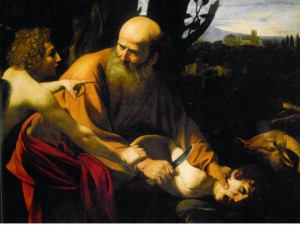 In 1603, Cardinal Maffeo Barberini, the future Pope Urban VIII, commissioned Michael Angelo Merisi, otherwise known as Caravaggio, to produce the masterpiece called “The Sacrifice of Isaac” which is now displayed in the Uffizi Gallery, Florence..

As a young artist, Caravaggio learned how to paint in the workshop of Simone Peterzano by studying life forms, nature and, in particular, the effect of light on subjects. At the age of 21, Caravaggio went to Rome where he worked in Giuseppe Cerasi’s workshop. The roman artistic environment of this epoch was dominated by the mannerist style and Caravaggio brought a revolutionary idea to this forum by painting the heroes of sacred history with the faces of men and women of the street who were tired and wounded by life. This approach caused a stir and even a little envy in his contemporaries, but it also brought him much admiration by powerful patrons like Cardinal Francesco Maria Del Monte.

Caravaggio’s Roman experience ended in 1606 when he killed a man during a brawl and was forced to flee the capital. During these difficult years his style of painting became more dramatic and the contrast between light and darkness was accentuated.

The Sacrifice of Isaac is an episode in the life of the Old Testament Patriarch, Abraham who, at 100 years of age, was promised a son even though his wife Sara was sterile. After the miraculous birth of Isaac, God then asked Abraham to sacrifice his only son. Abraham is on the point of raising the knife with which to make the sacrifice to God and an angel of the Lord said to him, “Abraham, Abraham!” “Yes, Lord,” he answered. “Do not lay your hand on the boy,” said the messenger. “Do not do the least thing to him. I know now how devoted you are to God, since you did not withhold from me your own beloved son.” As Abraham looked about, he spied a ram caught by its horns in the thicket. So he went and took the ram and offered it up as a holocaust in place of his son.” (Gen 22:10-13)

The figure of Abraham dominates the centre of the masterpiece. He is a bearded, strong old man who is depicted wearing a red cloak and a brown robe. His left hand holds his son on the altar whilst his right hand holds the sacrificial knife. Isaac’s face shows the grimace of pain, it depicts the cry of the innocent about to be slaughtered. Cecco Boneri, Caravaggio’s apprentice and later a renowned painter, acted as a model for Isaac.

Abraham’s face has a quizzical expression as he turns to face the angel on the left of the scene who has unexpectedly arrived to prevent Abraham from sacrificing his son. The angel has the face of an adolescent and with a firm and decisive act prevents Abraham from sinking the knife into the boy. The angel’s right hand index finger indicates the ram to be offered in place of the boy located on the right hand side of the canvas.

The light strikes the body of the young angel and then reverberates towards Isaac. The light always indicates the blade of the knife. The artist has succeeded in highlighting Abraham’s obedience as his hand is holding the knife resolutely as he doesn’t hesitate in offering his only son to God. The face of the Patriarch is penetrated, not blinded, by divine light and Abraham is full of hope in Divine Providence.

Abraham is the man who listens to God and he was transformed by this obedience. Abraham went up the mountain as Isaac’s father but came down as the father of all believers.