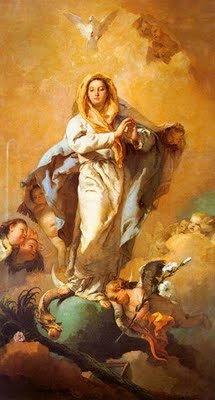 On the 15th August the Church celebrates the Solemnity of the Assumption. We would like to reflect with you on this beautiful feast using the first reading from the Solemnity which is taken from the 12th chapter of the Book of Apocalypse and also using part of a homily given by the Holy Father Pope Benedict XVI on the 8th December 2011.

The chapter opens with “a great sign that appeared in the heavens”. This sign indicates a message that appears in the heavens to be deciphered and it also indicates a message that doesn’t belong to the worldly order but to God’s domain and as such it is authoritative and decisive. The sign is “a woman adorned with the sun”. What is the meaning of this sign? What is God’s message to us? The woman represents at one and the same time both the Virgin Mary and the Church. The woman clothed with the sun reminds us of God’s light and splendour and the state of Mary’s entire being. She is “full of grace”, overflowing with love and the light of the sun which is God.

This woman was “standing on the moon”. The moon evokes man’s time – the days and the seasons. The moon is under her feet in so much as she has dominated time and is therefore above human history. Pope Benedict XVI taught us that the moon also indicates death and mortality during his discourse for the veneration of the Immaculate Virgin Mary in the Piazza di Spagna (or Spanish Square) in Rome on the 8th December 2011. The fact that the moon is below Mary’s feet means that Mary, “is fully associated with the victory of Jesus Christ, her Son, over sin and death; she is free from any shadow of death and totally filled with life. Just as death no longer has power over the risen Jesus (cf. Rom 6:9), so, through a grace and a rare privilege of Almighty God, Mary has left it behind her and gone beyond it. And this is manifest in the two great mysteries of her life: in the beginning, having been conceived without original sin, which is the mystery that we are celebrating today; and, at the end, being taken up body and soul into Heaven, into God’s glory. However, the whole of her earthly life was also a victory over death, because it was spent entirely at God’s service, in the unreserved sacrifice of herself to him and to her neighbour. For this reason Mary is in herself a hymn to life; she is the creature in whom Christ’s words have already come true: “I came that they may have life, and have it abundantly” (Jn 10:10).

There is another important particular: Mary has “twelve stars on her head for a crown.” (Ap 12:1) This is symbol of her regality and the crown that is formed by 12 stars is a clear reference to the 12 tribes of Israel and the 12 Apostles. She is the Mother and Queen of the people of the Old and New Testaments which together form the People of God. In this way, the woman clothed with the sun also becomes a symbol of the Church, the Christian Community in every epoch. She is pregnant and cries with the pangs of childbirth in the sense that, “she is carrying Christ in her womb and must give birth to him in the world. This is the travail of the pilgrim Church on earth which, amidst the consolations of God and the persecution of the world, must bring Jesus to men and women”. (Pope Benedict XVI 8th December 2011)

At this point another sign appears in heaven: “a red dragon” (Ap12:3). This sign is not described as great in so much as it represents a symbol of evil and as such it is one that is limited. This sign is in the heavens because evil, in its many historical forms, tries to obstruct God’s plan for the earth and humanity. The dragon is red, which is a symbol of war and violence and has seven heads because he claims his own regality although it is inverted in respect to God’s regality. In the same way that he drags the stars down to the earth, he intends to destroy creation and bring chaos upon the earth. St John clearly states in verse 9 that this dragon is the devil, satan who opposes God and wants to put himself in His place. Satan fights against the woman and her descendants as he knows that she brings Jesus to the world. This dragon has tried in vain to devour the child Jesus – the “son who was to rule all the nations” (Ap12:5) because “Jesus, through death and resurrection, ascended to heaven and is sat on His throne” (Pope Benedict XVI 8th December 2011). For this reason, the dragon has turned his attacks against the woman – the Church that: “in every epoch […] is sustained by the light and strength of God who nourishes her in the desert with the bread of his Word and of the Holy Eucharist. And so it is that in every tribulation, in all the trials she meets over time and in the different parts of the world the Church suffers persecution but turns out to be victorious” (Pope Benedict XVI 8th December 2011).

The time of persecution and tribulation is limited. In fact the woman stays in the desert “where she was to be looked after for a year and twice a year and half a year” (Ap 12:14). Therefore, we must not be afraid of anything because the Lord is always with us and doesn’t allow us to be tempted beyond our strength. The destiny that awaits us in the Resurrection is to share in the same dignity as Christ as a son of God, and, like Mary, we will inherit the place that God has prepared for us from the very beginning of time!