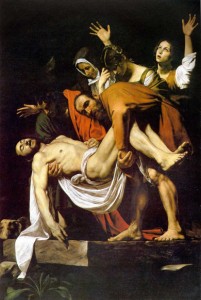 In the Church of Saint Mary in Vallicella in Rome, the home of the Oratorian Congregation founded by St Philip Neri between 1602 and 1604, Michaelangelo Merisi, otherwise known as Caravaggio, was commissioned by the Vittrici family to paint an altar piece depicting one of the sorrowful mysteries of the Holy Rosary: the death of Jesus. Caravaggio chose to represent the moment when Jesus was placed in the tomb. This precious canvas realised in oil is known as “the Disposition” and is currently displayed in the Pinacoteca – the Picture Gallery – in the Vatican Museums.
In the Disposition, Caravaggio describes the drama of Christ’s tomb using a theatrical scene. There are five figures in the scene, two men and three women, placed around Christ’s dead body forming a solid group anchored upon the tombstone. The tombstone is depicted at an angle that reaches out towards the spectator reminding us of Psalm 118 “the stone that the builders have rejected has become the cornerstone” (v 22). 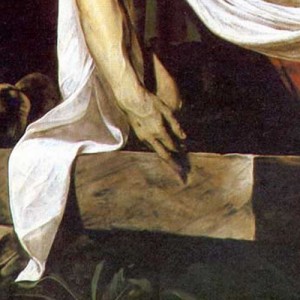 We recognise Jesus’ Mother, Mary, in the old, suffering woman. On her right, Mary Magdalene, crying with her head bowed into her hands. Mary of Clopas is situated behind the woman raising her eyes and hands to heaven. The young man who is supporting Jesus’ upper body is St John, the beloved Apostle. The old man supporting Jesus’ legs is Nicodemus (cfr Jn19:39-40). Jesus’ bruised body is about to be lowered into the tomb that opens at the lower level of the painting. The glare of Jesus’ white body and the whiteness of the shroud reminds us of the Victimae Paschali – the Sequence of the Easter Octave which reads, ‘death and life have contended in that combat stupendous …The Prince of Life, who died reigns immortal’. Christ’s triumph is represented by His abandoned right arm, that is falling below His body with His fingers indicating the number three – the day of the Resurrection. 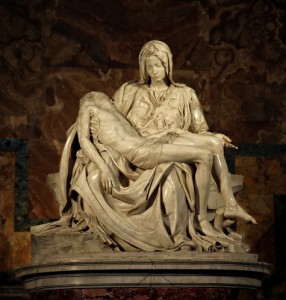 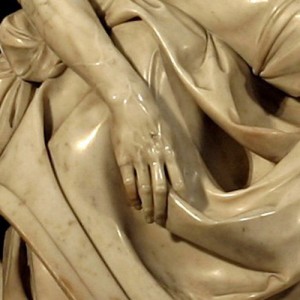 The drooping arm and the three fingers reveal a continuity between the artists of the time. Caravaggio was certainly inspired by Michelangelo’s Pietà. Approximately one hundred years earlier in 1499, Michelangelo Buonarroti who was then 23 years old, realised the Pietà for Cardinal Jean de Bilhères Lagraulas, appointed by Pope Alexander VI to be the Ambassador for the Holy See to King Charles VIII of France.
In 1749 the Pietà was placed in the Chapel of the Crucifix (now known as the Chapel of the Pietà) in St Peter’s Basilica where it can still be found today. With great mastery and wisdom the artist was able to liberate the image of the Mother of God, with a face expressing suffering and eternal beauty, from a block of marble. The face of the Mother is younger than her Son because Michelangelo explained that those who are close to God never grow old! Christ, depicted as a spouse resting in the arms of His bride, has overcome the death’s deep sleep. Christ’s right hand falls from His body indicating with three fingers the day of the Resurrection.
With three fingers these artists explained the mystery of the Resurrection. The Temple’s veil was removed and with the Resurrection we enter into Eternity. What can be a more eloquent image to express the contents of our Faith?