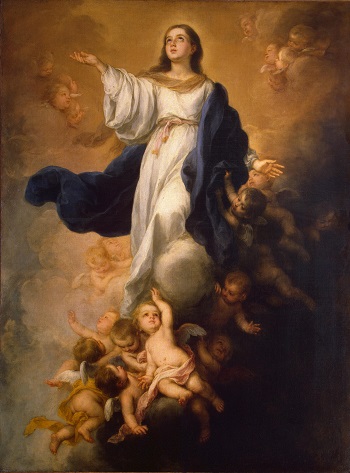 This year we celebrate the 70° anniversary of the proclamation of the dogma of the Assumption of the ever-Virgin Mary into heaven. Christians have always believed in this truth. In fact, from the first centuries of Christianity, oral accounts about the end of the life of the Virgin were handed down in the Judeo-Christian community. At the end of the second century, these accounts were written down which gave form to the apocryphal texts that contained some details about the Dormition or Transit of the Virgin. This rich apocryphal tradition was confirmed by the Fathers of the Church and the holy authors of the 4th and 5th centuries. For example, according to St James of Sarug (+ 521) when Mary reached the “time to walk the path of all generations,”

which means the path of death, “the group of the Apostles” gathered to bury the “virginal body of the Blessed One.” Saint Modestus of Jerusalem (+ 634), after having spoken of the "most blessed dormition of the most glorious Mother of God", affirms that Christ "raised her from the tomb" to take her up with Him into glory.

After centuries of faith in the Assumption or Dormition of the Virgin, how did the proclamation of the dogma transpire?

Pope Pius XII, through the encyclical letter, Deiparae Virginis Mariae, of the 1st May 1946, decided to consult all the Bishops of the world so that they could express their opinion and that of the faithful regarding the definition of the dogma of the Assumption of the Blessed Virgin Mary. In the encyclical the Holy Father asked that they, “raise insistent prayers to God so that He might clearly manifest the will of His ever-adorable goodness in this instance” (Pope Pius XII Deiparae Virginis Mariae no 3) 1,181 Bishops expressed the fact that they were in favour of this proclamation, while only 6 were against.

Moreover, on April 12, 1947, the Virgin of Revelation, appearing to a Protestant Bruno Cornacchiola, who was fighting against the Catholic Church and wanted to kill Pope Pius XII, spoke expressly of Her Assumption into Heaven, almost as an answer and confirmation of the Pope's prayers: “My body could not decay and did not decay I was taken to heaven by My Son and His Angels”. 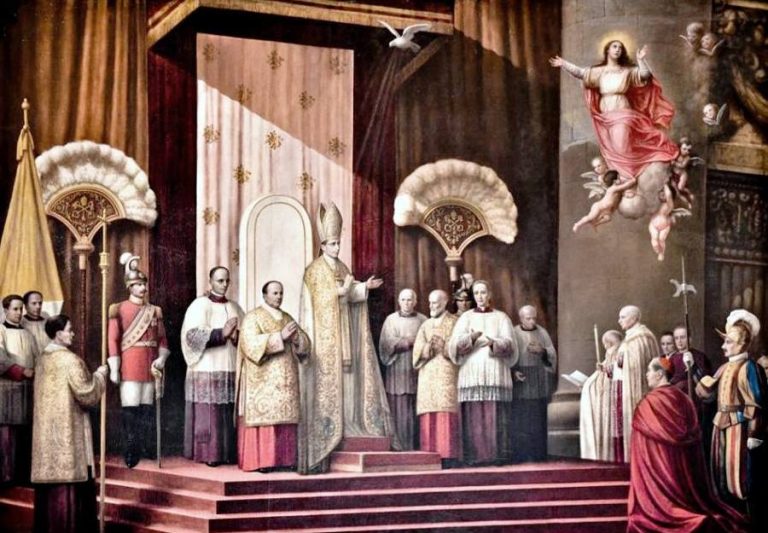 Therefore, Pope Pius XII, after maturing the certainly of that truth, founded on the Sacred Scriptures and the Tradition of the Church, professed by the people of God, finally defined the dogma on the 1st November 1950: “Hence the revered Mother of God, from all eternity joined in a hidden way with Jesus Christ in one and the same decree of predestination,(47) immaculate in her conception, a most perfect virgin in her divine motherhood, the noble associate of the divine Redeemer who has won a complete triumph over sin and its consequences, finally obtained, as the supreme culmination of her privileges, that she should be preserved free from the corruption of the tomb and that, like her own Son, having overcome death, she might be taken up body and soul to the glory of heaven where, as Queen, she sits in splendour at the right hand of her Son, the immortal King of the Ages.” (Munificentissimus Deus n 40)

Even before the proclamation of the dogma the feast was included in the liturgical calendar of the Church on the 15th August. This feast was celebrated because in the Jewish tradition there was the “Feast of Tabernacles” which commemorated the death and resurrection of the body in mid-August. Therefore, the date of the 15 August seemed most appropriate to celebrate the Assumption of Our Lady. 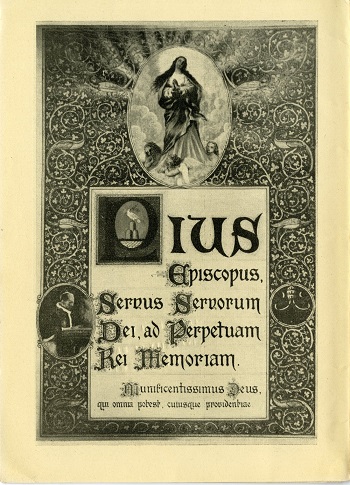 The Apostolic Constitution Munificentissimus Deus does not make any pronouncement about the question of Our Lady’s death. According the St John Paul II, Pius XII did not consider it to be the right time to solemnly affirm the death of the Mother of God, and yet, nor did he negate it. In fact, for centuries it has been common belief that Our Lady was similar to Her Son, even in her death. The Mother cannot be superior to her Son who knew the death of the tomb, overcame it and so transformed it into an instrument of Salvation. (cfr. Pope John Paul II, General Audience, 25 June, 1997)

St John Damascene (†704) asks: “Why is it that she who in giving birth surpassed all the limits of nature should now bend to its laws, and her immaculate body be subjected to death?”.

And he answers: “To be clothed in immortality, it is of course necessary that the mortal part be shed, since even the master of nature did not refuse the experience of death. Indeed, he died according to the flesh and by dying destroyed death; on corruption he bestowed incorruption and made death the source of resurrection” (Panegyric on the Dormition of the Mother of God, n. 10: SC 80, 107).

As Mary participated in the redemptive work of Christ’s salvation, she shared His suffering and death in view of the redemption that this would bring to all humanity. Therefore, it follows that she also participated in His Resurrection as an anticipation of the resurrection of the dead. One day, we too will rise and have a glorious body like that of Jesus and Mary. (Cfr. CCC 966)

Sustained by this certainty, we can join in the prayer of Pope Pius XII and say to the Blessed Virgin Mary assumed into heaven: “we on this earth, who pass as pilgrims comforted by faith in future resurrection, look to thee, our life, our sweetness and our hope. Draw us with the sweetness of thy voice and show unto us, one day, after this our exile, the blessed fruit of thy womb, Jesus. 0 clement, 0 loving, 0 sweet Virgin Mary.  Amen. ” Pope Pius XII