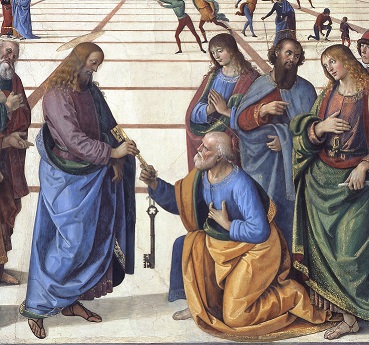 ‘Jesus said to him in reply, “Blessed are you, Simon son of Jonah. For flesh and blood has not revealed this to you, but my heavenly Father. And so I say to you, you are Peter, and upon this rock I will build my church, and the gates of the netherworld shall not prevail against it. I will give you the keys to the kingdom of heaven. Whatever you bind on earth shall be bound in heaven; and whatever you loose on earth shall be loosed in heaven.” (Mt 16:17-19)

With these words Christ instituted his Church and made St Peter the first Holy Father. St Peter became the “rock” upon which the Church was built. The name Peter or Petros in Greek means rock. Therefore, the is a rich symbolism in the fact that the Lord changed Simon’s name to Peter, the rock! Jesus would have spoken Aramaic and in this language kepha is the is the equivalent to Peter which means ‘large rock’ similar to a foundation stone. Therefore, the Lord choose Peter to make him the visible foundation stone on which to build the Church.

There are a number of other ‘titles’ which refer to the Petrine office. The Holy Father is the ‘Vicar of Christ’ and the ‘Pastor of the Universal Church on Earth’ (CCC 936). These titles have a rich Biblical significance that can supplement our understanding of the Holy Father’s office.

St Peter, received his divine commission from the Lord to be ‘Vicarius Christi’ the Vicar of Christ. But how are we to really understand this title? In the Old Testament the Vicar was the person who acted and ruled in the king’s absence speaking on his behalf. For example, Joseph was second only to pharaoh in the land of Egypt (Gn 41:39-40). In the Gospel text the Lord tells Peter that he is the rock upon which He will build HIS Church indicating that Peter is therefore empowered to ‘rule the kingdom’ in the Lord’s absence (cf Mt16:18). However, Peter must rule in a way that imitates the king he served. As Christ’s Vicar he is to imitate Christ, to act with the mind of Christ. Christ said, ‘I am the Good Shepherd …I lay down my life for my sheep’ (Jn 10:11) or in another place, ‘the Son of Man came not to be served but to serve’ (Mt 20:28). If Christ is a servant His Vicar must also act in the same way and so Pope Gregory the Great adopted the title ‘Servus Servorum Dei’ the Servant of the Servants of God to describe correctly the Petrine Office. Pope Benedict XVI explained the role of the Vicar of Christ as follows:

‘The Pope is not an absolute Monarch whose thoughts and desires are law. On the contrary, the Pope’s ministry is a guarantee of obedience to Christ and to His Word. He must not proclaim his own ideas, but rather constantly bind himself and the Church to obedience to God’s Word in the face of very attempt to adapt it or water it down and every form of opportunism.’ Pope Benedict XVI Possession of the Chair of Peter 7 May 2005.
The role of Supreme Pastor of the flock flows from Christ’s words to Peter after His Resurrection when the Lord gave him the role of feeding and tending the flock (cf Jn 21:15-16). Taken together with the power of the keys (Mt 16:17-19), to bind and loose, this means that Christ gave Peter, and therefore the Holy Father, the supreme teaching authority in the Church. Therefore, “the Pope enjoys, by divine institution, ‘supreme, full, immediate and universal power in the care of souls.” (CCC 937). It is Peter, or the Holy Father who “is the rock on which Christ will build his Church; he is the one[….] whose faith will not fail and who will strengthen his brethren; lastly, he is the Shepherd who will lead the whole community of the Lord’s disciples.” (CDF, The Primacy Of The Successor Of Peter In The Mystery Of The Church, n3).