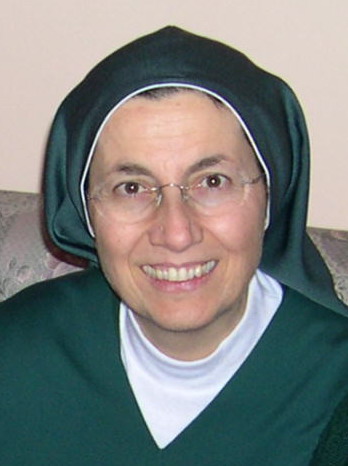 ‘I was a treble voice in the Rai Choir as a young girl, then I studied at the Conservatory of Santa Cecilia in Rome where I received a diploma in Operatic singing. I also had the experience as a singer of pop music for “Four and Five Nora Orlandi” and finally, after the culmination of many years of professional scores and manuals of music from opera singing, I received a contract once again with the state television choir. All of this was achieved by the age of twenty four.’ Before the consecration of her own life to God “God – says Sister Rebecca Maria Nazzaro, the protagonist of the curriculum vitae – had been part of my life since early childhood and music the remainder. And all thanks to my father and my mother, one with prayer, always present in every circumstance, but also with the tenderness of an extraordinary constancy; the other with the simplicity and attention to gestures towards me and my brother and two sisters. They have unwittingly given me a rule of life that, just as unconsciously, has blossomed into a call to give that life to the Lord.”

Among the different circumstances that led Sister Mary Rebecca, a fifty year old Roman, now superior of the Missionaries of the Divine Revelation and vice USMI diocesan delegate, to enter the novitiate of the order founded by Mother Sister Prisca Mormina (1922-1998), is the influence of her father “there is really an intense relationship with my father, always attentive to our needs as children, and also an amazing communicator of his passions: his love for music; as he says himself, ‘music has created what is beautiful’.”

Among the images that come to mind for Sister Nazzaro during her story, is the example of her father who upon returning from work, took up his guitar to teach songs like the ‘Zecchino d’oro.’ Or the memories of how we spent Sundays during the summer by the sea at Ostia: “We left the beach without us all going to the pier to watch the sunset and say a prayer of thanksgiving to God for the beautiful day.” Or how we passed the winter months visiting churches in the historic centre of Rome, “We visited a different Church every week.”

Despite everything, however, Rebecca was living with the simplicity of her own spirituality, while it was always important, it wasn’t the true fulcrum of a life already full of professional commitments. “At certain times of the year – she says – especially during the around the world tours, I would simply look for a Church to attend Sunday Mass. However, when I returned home, I did not do much more than my Sunday obligations.”

But then her journey for the truth of her life took a different path following certain events eventually she became more conscious of the purpose of her life and her spiritual growth came to a crossroads. “At first I did not understand even the connotations of what turned out to be the call to give myself totally to God. I had a few people who were close by to help me. Some friends advised me to go for psychological analysis, thinking that maybe I had some psychological problem. But even here the love of her family proved so crucial to remove that “initial confusion in saying a ‘yes’ without hesitation to the uncanny/puzzling call that the Lord was addressing to me.” In a strange way, she says, more than the positive professional appearance, there was also the sentimental aspects, but “the love of God is stronger. The seed had sprouted and had moved me so deeply that all human resistance was now failing. It was enough just to trust him, and so I did.”