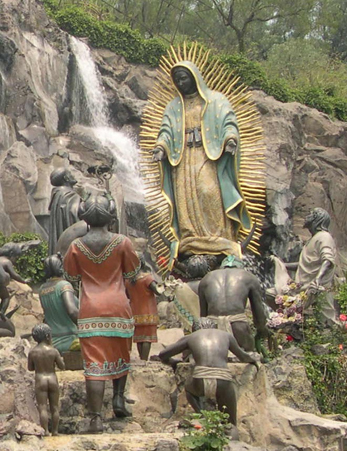 At a time when thousands of Catholics in Western Europe were deserting the Catholic Church with the spread of Protestantism, an apparition of the Virgin Mary to an Indian, Juan Diego, in Mexico was to compensate for the losses on the European continent with the conversion of the Americas. The story of the apparition of the Virgin of Guadalupe helped to convert a continent and, even today, provides a rich lesson for us in Evangelisation.

According to the oldest account that was written in Nahuatl, by Nican Mophua, on the 12th December 1531, the Virgin of Guadalupe appeared to an Indian, Juan Diego, and sent him to give a message to Bishop Fray Juan de Zumárraga requesting that a new sanctuary was to be built on the top of Tepeyac hill dedicated to Mary. As a confirmation of this divine request, the Virgin of Guadalupe left her own image imprinted on Juan Diego’s tilma.

These facts confirm that God placed this newly evangelised people under the special care of His Most Holy Mother. Even today, this ‘sign’ speaks to us of God’s presence amongst us. As a confirmation for the Bishop , the Virgin made roses grow in winter on the Tepeyac Hill and asked “Juanito, the smallest of her sons” to use his tilma to carry them to the Bishop. It was upon uncovering the roses before the Bishop, that Our Lady’s miraculous image was discovered. That tilma was made of a agave fibre that usually only lasts approximately 20 years. Today, the miraculous tilma, with its incredible image of the Virgin Mary, has still been preserved in its original state some 500 years later.

In the language of the Indigenous people, the use of symbols is very important because they learn to communicate through different codes or words that they hear and then transmit identically. According to the experts, the image of the Virgin of Guadalupe, transmits a message as every part of the image has a particular meaning. Holy Mary of Guadalupe came to evangelise us, she came to bring Christ to us through the universal language of symbols.

The image of the Virgin of Guadalupe is that of a Mexican Indian girl. She wears a robe of pink and covering her hair is a mantle of turquoise edged with gold and decorated with golden stars.
Her hands are joined in prayer. She is surrounded by the sun, standing on the moon with an angel supporting her from below. The Virgin of Guadalupe is an icon of the Catholic Faith.

“A great sign appeared in the sky, a woman clothed with the sun, with the moon under her feet, and on her head a crown of twelve stars. She was with child and wailed aloud in pain as she laboured to give birth.” (Ap 12:1-2) The Virgin of Guadalupe stands before the sun as a sign that she is the Mother of the Light of the World. The Mexicans of the time worshipped the god Huitzilopochtli, whose sign was the sun’s rays, and the god of the night who’s sign was the moon. Stood before the sun, upon the moon the Mexicans could clearly see she is more powerful than their false gods.

The turquoise mantle worn by the Virgin of Guadalupe symbolises royalty and virginity to the Indians and the angel at her feet, nobility, as only a royal person could be carried on the shoulders.

The mantle is decorated with the most brilliant star constellation. In the 1980’s Dr Mario Rojas Sanchez and Dr Juan Homero Hernandez Illescas made a study of the stars and found that the constellation on her mantle was that of the morning of the 12th December 1531 – the day she appeared. The decoration shows that she is Queen of the Universe.

The face of the Madonna and that of the angel below her feet, is that of the Mestizos people born after the conquest of the Americas. This shows that the Catholic Faith is for all people! She is looking downwards, in a kindly way, towards the viewer. It was traditional for Indian gods to be depicted looking straight at the onlooker which is often a frightening image. The Virgin of Guadalupe looks down, but towards us, to remind us of God’s merciful love towards all men. Indeed, she said to Juan Diego “Am I not your Mother….”!

The Madonna is pregnant and her belt signifies her Virginity because she is the ever Virgin Mother of God. There is a unique flower in the position of the womb. To the indigenous people this type of flower signifies “always in motion and the Infinite” – or, in other words, She is the Mother of the Eternal One!

The Virgin is standing on the moon which, in the natural world, helps to regulate time and so this means that she is outside time – or resides in Eternity! The angel below her feet has 3 coloured wings that are similar to the eagle that symbolises the foundation of Mexico. 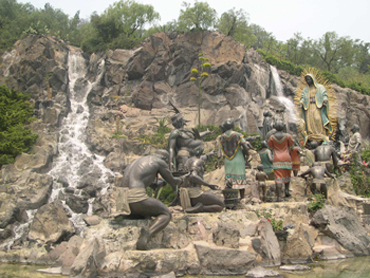 Many scientists have analysed this image but always arrive at the same conclusion that is difficult to express. They say that effectively it is an acheropite image (which means not realised by human hands) whilst the art experts say that it is a work that was ahead of its time, a fascinating image. Nor in the creativity of the most well-known artists of the renaissance, or in the talents of the major restorers has there been the use of the colours, techniques, interplay and fascination created by this work. It is a work that only grows in fame, devotion and fascination for its admirers and to those who contemplate her she says: “Am I not your Mother?”

The Holy Mother Church has also intervened in the history of the Virgin of Guadalupe as Pope John Paul II named her: Our Lady of Guadalupe patron of the Americas, and patroness of the Unborn.

Let us now turn our gaze towards our Mother of Guadalupe and ask for her protection so that She who is the fountain of faith may reinforce our faith and that of the whole world. Holy Virgin of Guadalupe, increase our faith!