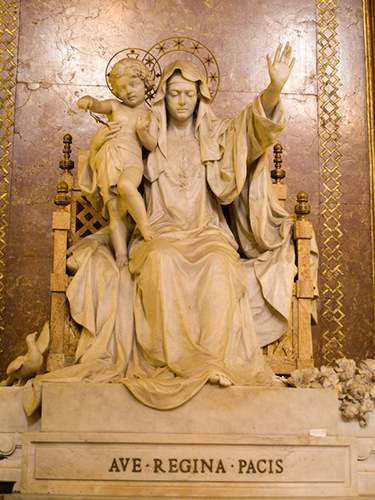 The month of September opened with an appeal by Pope Francis for peace in Syria, the Middle East and the entire world: “War never again! Never again war! Peace is a precious gift, which must be promoted and protected… Never has the use of violence brought peace in its wake. War begets war, violence begets violence.” (Pope Francis Angelus 1st September 2013)

We unite with the Holy Father asking: “What can we do to make peace in the world?”

Prayer, penance and fasting, offered through he intersession of Mary, Queen of Peace, have always been the weapons used by God’s people to obtain the gift of peace.

During the month of September, the Church’s Liturgy presents us with three great Marian Feasts:

8th September, the Nativity of the Blessed Virgin Mary. Mary’s birth represents the hope of all humanity because she will bring the Son of God into the world who will teach us that peace is the fruit of forgiveness.

12th September, The Most Holy Name of Mary. This feast was extended to the whole Church by Pope Innocent XI in thanks to Our Lady for the victory of the Battle of Vienna on the 11-12 September 1683. The Christian army, led by the Polish King John Sobieski, arrested the advancement of Turkish troops into Europe. The battle was won in the name of Mary because the army Chaplin, a Franciscan friar, made the army put an image of Our Lady of Loreto on every flag whilst the women, elderly and children incessantly prayed the Holy Rosary.

15th September, Our Lady of Sorrows. The Mother of God knew the sorrow and violence of the men who killed her Son on the cross. However, like her Son, Mary repeated in her heart: “Father, forgive them as they know not what they do.”

In 1918 Pope Benedict XV, commissioned the Roman sculptor Guido Galli to realise a statue of Our Lady Queen of Peace as a thanksgiving for the end of the First World War. Today, this beautiful statue is situated in St Mary Majors Basilica in Rome.

The Virgin Mary is seated upon a multi coloured marble throne. Her mantle flows from her head and she has a long dress which is adorned with fine arabesque embroidery. Her eyes are looking downwards and her left hand is raised towards the heavens as if to say: “Enough, no more wars.”

The Virgin’s right hand is supporting the Baby Jesus who is standing beside her. He is awaiting a sign from His Mother to let the olive branch that He holds in His hand fall to the earth. At the foot of the throne there is a dove with its wings spread as if to take flight. It seems as though it is waiting to catch the olive branch, the sign of peace, as it falls from Christ’s hand. At the base the throne is also a collection of roses and lilies that indicate the beauty and rebirth that God’s peace brings.