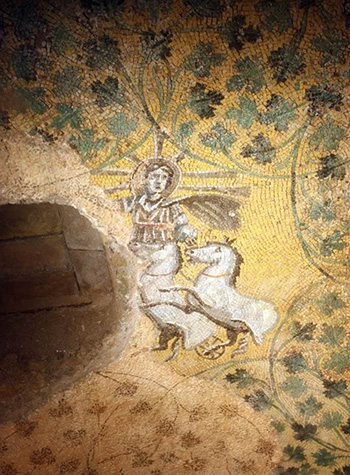 Just a short distance from St Peter’s tomb in the Vatican Necropolis, the Mausoleum of the Julii family, dated to the third century, is located. The mausoleum was constructed by Iulia Palatina e Maximus for their baby, Iulius Tarpeianus, who died at two years of age.
The mausoleum’s ceiling was decorated by a splendid mosaic of green vines set off by a golden background. Today, only half the mosaic has survived the passage of time. The remaining part of the mosaic is well preserved such that the branches covered by lush leaves, as an ancient symbol of a full life, can be clearly be seen. The interweaving of yellow and gold in the background symbolises Eternal life, man’s entry into the beatific vision of God. The branches form a frame around Christ who is represented as the God Apollo rising to heaven on a chariot whilst His left hand is holding a globe. Christ’s head is covered by a halo with several resplendent rays. In the pagan world, death and suffering held no meaning and before its reality there was only suffering and fear. The testimony of these parents faced with the death of their son is clear: little Julius has entered heaven with the Risen One because Jesus , “has come into the world as light, to prevent anyone who believes in me from staying in the dark anymore.” (Jn 12:46)

How is an unbelievers life transformed once he has embraced the light of faith and started the journey to become a Christian?
We find the answer to this question in the Encyclical Letter Lumen Fidei, Pope Francis’ first encyclical letter written on the basis of Pope Benedict XVI thoughts as a gift to the Church during the Year of Faith. “The pagan world, which hungered for light, had seen the growth of the cult of the sun god, Sol Invictus, invoked each day at sunrise. Yet though the sun was born anew each morning, it was clearly incapable of casting its light on all of human existence. The sun does not illumine all reality; its rays cannot penetrate to the shadow of death, the place where men’s eyes are closed to its light. [….] Conscious of the immense horizon which their faith opened before them, Christians invoked Jesus as the true sun “whose rays bestow life” (Lumen Fidei no 1).

Can this same light also illuminate men of the third millennium?
Science and technical progress has provided man with other “lights” that are often more dazzling and even cause man to think that the light of faith is irrelevant to our daily lives. However, even today when faced with injustice and death, man continues to cry and suffer. The wounded hearts of the men of the third millennium may even go without Christ’s very consoling words to Martha when faced with the death of her brother, Lazarus. “Have I not told you that if you believe you will see the glory of God?” (Jn 11:40) Faith can only be expressed with the verb “to see,” “Those who believe, see; they see with a light that illumines their entire journey, for it comes from the risen Christ, the morning star which never sets.” (Lumen Fidei no 1).
As in the Encyclical letter, we should hope to join Mary, Mother of God, in seeing that light of faith and like her one day we may be permitted to enjoy the beatific vision granted to all those who have believed in the Word of the Lord. (cf Lk 1:45)