Michael Angelo’s Crucifixion of St Peter in the Pauline Chapel 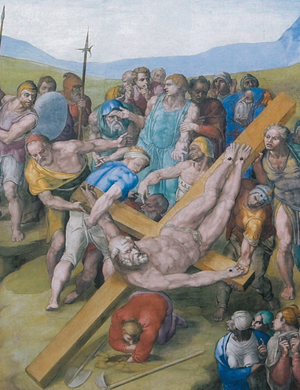 The archeologist and graphologist, Margherita Guarducci, who lead the second phase of excavations to identify St Peter’s tomb in the Vatican Necropolis between 1940-1950, studied the various historic sources arrived at the conclusion that St Peter was crucified in Nero’s Circus in the Vatican on the 13th October 64A.D.

To sustain this hypothesis she revealed that the 13th October 64A.D occurred on Nero’s 10th anniversary and that it was traditional to celebrate such an anniversary by offering the people a bloody spectacle in which the Emperor’s enemies were killed. As a celebration of Nero’s 10th anniversary it is likely that the blood of the Christians was offered along with the martyrdom of their leader, St Peter, who was crucified upside down.

We traditionally celebrate the ‘dies natalis’ or the birth into heaven (date of the death) of the Apostles St Peter and St Paul on the 29th June which is the same day in which Pagan Rome celebrated it founders, the mythical brothers Romulus and Remus.

By viewing Michael Angelo’s fresco the “Crucifixion of St Peter” in the Pauline Chapel we can also become witnesses to St Peter’s ‘dies natalis’.

In 1542 Pope Paul III Farnese commissioned Michael Angelo Buonarroti to frescoed the walls of the Pauline Chapel which is a place of prayer. Even today the Pope and his pontifical family continue to use this Chapel for prayer and so it is considered the ‘little’ Chapel of the Pontificate. The Sistine Chapel, located just a few metres away, is the ‘Cappella Magna’ or the main Chapel of the Holy Father that is reserved for Solemn Pontifical celebrations and the election of a new Pope.

Before his election to the Pontificate, Pope Paul III was called Alexander Farnese. He was a powerful and ambitious man yet when he rose to the throne of Peter he was seized by divine Grace and decided not to place his own interests before those of God and the Church. He choose St Paul’s name as the name for his Pontificate as St Paul was the Apostle that was the first persecutor of the Christians who then became Christ’s untiring servant.

The Council of Trent (1545-63) opened during the Pontificate of Pope Paul III. It was through this Council that a profound spiritual renewal of the Church, that had been wounded by clerical abuses and Protestantism, commenced. In 155, after 8 years work, an old Michael Angelo completed his masterpiece which would be his ultimate frescoes. The Conversion of St Paul and the Crucifixion of St Peter were placed opposite each other on the two lateral walls of the Chapel.

The first Pope is depicted in the moment in which the cross is about to be placed in the ground and raised. His look is penetrating and almost fearsome as he searches for something or someone at the hour of his death. The eyes of those who surround the cross have a restless expressions on their faces but also a deep participation in the event. For example, there is the man with the long beard with his arms folded in the right hand foreground of the scene. Maybe this is Michael Angelo’s self-portrait.

The figures are placed in space without perspective and various sizes and shapes to give a sense of depth. To the right of the crucifixion a man bows to the ground to measure the depth of the hole just dug in the Vatican Hill.

Michael Angelo depicts Peter’s body filled with great internal strength. His look penetrates the onlooker as a warning: “We did not follow cleverly devised myths when we made known to you the power and coming of our Lord Jesus Christ, but we had been eyewitnesses of his majesty.” (2 Pet 1:16)